Review - In An Absent Dream by Seanan McGuire 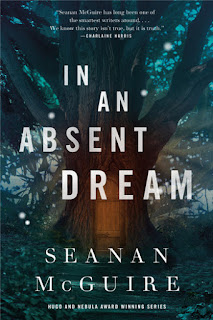 I reviewed In An Absent Dream as an audiobook (even though I've cited the availability of the hardback version above, probably because I fetishise the physical object or something, don't get me started).

The fourth volume in the Wayward Children series is actually a prequel, the events taking place a few decades before the other books. We enter the world of (Katharine) Lundy, an intense, studious girl who has no friends. It's the 1960s, and teachers can easily get away with saying things like, girls need more help with maths. Because her father is the Principal of her middle American elementary school, no-one wants to know her. It's all not fair, and Katharine longs for a world where things are fair and there are rules that everyone follows.

In the manner of the Wayward Children books, of course, she finds just that: a doorway leads her to the Goblin Market where everyone must always give "fair value". (To fail to do so would lead to an escalating series of changes and losses, eventually resulting in... well, I won't spoil that).

The story is bookmarked by two references. At the beginning is an extract from Christina Rossetti's bewitchingly enticing poem, also Goblin Market, stressing the ripeness, the juiciness, the taste, of all those fruits that are on offer. Towards the end, McGuire's authorial voice declares sadly that "this is not a fairy story". (I may slightly misquote, I listened to the audio so can't easily check the text).

It certainly isn't that sort of fairy story - you know, where the Princess and the Handsomse Prince kiss and live Happily Ever After. But I think McGuire's warning is slightly deceptive. That first quote has already given us some orientation as to what sort of (fairy) story the book is. Rossetti's poem may be interpreted as a sort of yearning warning to Victorian young womanhood against temptation, in the form of those oh-so-sweet goblin fruits, but there is more than one level of meaning to it and McGuire deftly exploits another that is a common theme of fairy stories - the bad bargain. Lundy (she chooses to use her surname after a warning that names have power) is told what the rules of the Market are, and soon learns the consequences of failing to keep them, but she is, as well as being a rule-taker, always on the lookout for loopholes. This leads her to (in a sense) gamble with the Market, the stakes becoming higher and higher. Whether that will ultimately buy her freedom and her heart's desire or... not... you have to read the book to see.

It's in some respects a curious book. Part of the Wayward Children series, it is very much a standalone, with little involvement of Miss Eleanor and her School.

Curiouser (and curiouser) still, the focus of this novel is very much on the progress of Lundy's bargaining and how that develops. We hear about high adventures - much Questing goes on, there is talk of defending the Market's borders and even a death of a friend of Lundy's - but this is all off camera, as it were with the book dwelling instead on Lundy's comings and goings, the tension between The Market, the world where she belongs (her "home") and our world, the world of her parents and sister. So we see a lot of her coming and going, with her life in the Goblin Market glossed over. That felt frustrating at times, you just have to trust McGuire though - in a sense we can imagine what we don't see, and putting all that in would make the book a lot longer and smother the theme she's trying to develop. Still, I would like to know more about those skipped over episodes.

Finally, I've referred above to bargaining, to "fair value" and the central metaphor of this book is a market. The Archivist, the nearest thing Lundy has to a guide and mentor in that strange world, is rather fond of lecturing her on the workings of that market. If you listen carefully (remember, I was listening, not reading) I think you'll conclude that this market is not a "market" in the sense that the modern neoliberal consensus would recognise (it's too fair for that; a Goblin Market is, after all, a fair, and so has to give fair value?) but it's still hard for these passages not to resemble economics seminars. And in at least one of them (which explained the background to Lundy's first big gamble) I never quite understood the reasoning. (Sorry this is obscure, spoilers, spoilers, spoilers). I think two things are going on here - first, since Rossetti's day, terms like "market" and "value" have become tainted by what is, after all, referred to as the "dismal science" and secondly, the ideas at the heart of this book are quite complex to convey in what is a short book.

That seems to have taken us a long way from fairy tales and magic doors. Rest assured, those are present here, it's really an enchanting extension to the Wayward Children series. Also present - of course - is Lundy, an engaging and steely young woman whose love, loyalty and courage shine through.

It is really a very enjoyable book, and confirms that McGuire is continually taking this series to new places. I hope she does so again soon.

For more info on the book see the publisher's website here.