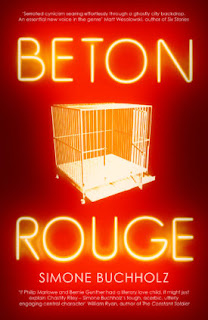 Today I'm joining the tour for Simone Buchholz's dark new thriller, Beton Rouge. I'm very grateful to Karen at Orenda Books for an advance (free) copy of the book, and to Anne from Random Things Blogtours for inviting me to take part in the tour.

Chastity Riley, unconventional public prosecutor and habitué of Hamburg's seamier nightlife, returns in a sequel to last year's Blue Night. Still chain-smoking, still drinking far too much, still brooding on her life and loves, Riley is a protagonist who makes an impact, much as if she'd reached out of the book with a steel bar and whacked the reader across the head. Blue Night introduced her doomy background in parallel with a fairly complex case that touched closely on her and her circle. In contrast, Beton Rouge has at its heart a simpler, more freestanding case, but it comes at a point where her and friends are going through some dark times.

As the book opens a man has been found naked, assaulted, imprisoned in a cage and left outside the entrance to one of Germany's most successful magazine groups. Who he is, what happened to him, and why, will only slowly emerge: a story of bullying, privilege, misuse of power and ignored voices that will take Riley and her new colleague Ivo Stepanovic to Bavaria in a search for answers in the past.

Buchholz's characterisation of Bavaria as a kind of rural Hell is fascinating and disturbing, adding to the deep loathing we've already seen Riley display towards the countryside by painting the region as mean-minded, both nosy about neighbours' business and at the same time inclined to turn a blind eye to all kinds of abuses and discontents.

Hamburg, for all its sleaze, feels far safer even though the journey to Bavaria - and the distance from home - allows Riley to brood on her on-off relationship with Klatschke, where something seems to be wrong. Riley relentlessly dissects that relationship, in the same breath as considering the case in hand - indeed, drawing up lists of questions to be answered mixing both issues around Klatschke and about the case.

I think that tendency to mix things up is part of what makes her such an intriguing protagonist. What she's effectively doing here is not only investigating crimes but approaching her personal life using exactly the same tools and techniques (including the deadpan, wisecracking internal monologue). That wasn't so clear in Blue Night because there the case itself got personal, but here it's very starkly depicted, whether in relation to Klatsche or when problems also arise between her friends Carla and Rocco. The group of friends seems to be under great strain - maybe Riley will soon have no-one left but herself to rely on?

This is all delightfully noir, a mood Buchholz gleefully plays up in the writing (and that Ward adeptly conveys in her deeply readable translation) with Chastity left doubtful about her future, brooding on her past and living, really, like her new colleague, very much in the present. 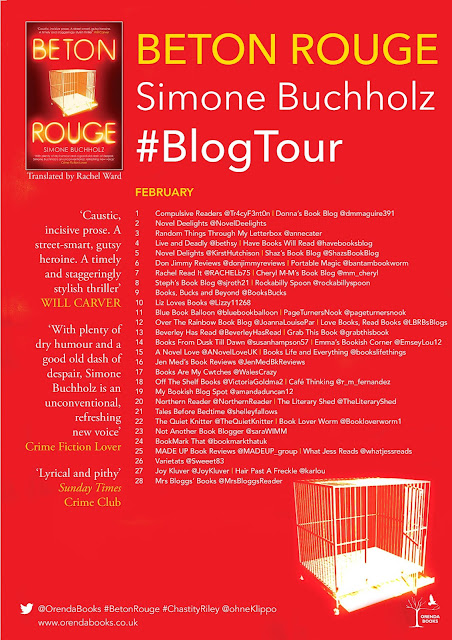