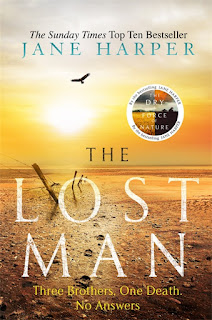 Today I'm joining the blogtour for The Lost Man by Jane Harper. I'm grateful to the publisher for a free advance e-copy of the book via NetGalley.

Nathan Bright's dog has died, his woman has left him and, even if his truck is running fine, his farm - actually a typically vast tract of land in the Australian outback - is on the ropes because the land is poor. He can be forgiven, a couple of times in this book, for sitting on the verandah of his brother's farmhouse and moodily strumming a guitar.

And indeed, Nathan does suffer from a degree of self-pity, reasonably, you might think, when you learn he's being shunned by the local community (again, "local" is a slippery concept, it's a three hour drive into town), that dog was probably poisoned, and much of Nathan's time and money is consumed by lawyers as part of custody battle for his son, Xander.

And more comes to light as well which I won't reveal here because spoilers, sweetie. I'll just say that Nathan and brothers Cameron and Bub haven't had it easy. Cameron's had it hardest perhaps because as the book opens, he's dead, victim of the overpowering heat of an Aussie summer. But why was he out at the "Stockman's Grave, ten kilometres from his abandoned car? Was the death suicide? An accident? or something more sinister?

I really loved the way that Harper spins this story as a mystery - and it is, with subtle clues, an air of menace, and a real solution - while keeping the focus on the people. Yes, the police do make an incidental appearance but they're not really investigating anything here. There's no role, I'm afraid, for Aaron Falk, Harper's protagonist from The Dry and Force of Nature (though she makes clear the book does take place in the same "world" - there is a reference, indeed a family link, to Kiewarra).  That's a brave choice, marking this as a different kind of crime story from its predecessors. The strands of the mystery here are all around personalities, motives, relationships, not forensics or pathology.

And it's a mystery that challenges Nathan's conception of himself, his self-sufficiency on that wretched farm, his relationship with his son and the history of his family. Harper adeptly relates the lives of these rural Australians to the unforgiving landscape - to the cosseted Pom, it's almost a science fictional world where survival depends on functioning aircon, refrigeration and your truck, an unprotected man or woman having no chance; you always travel with spare water, food, a radio; each farmhouse has its own drug kit, with locked compartments to be accessed only on the say-so of the Flying Doctor service; cold rooms that store months of food, delivered twice a year by truck; how the removal of melanomas is routine, kids do their schooling on the radio or Internet.

It is a land where things can go wrong so quickly, where distance and isolation means survival depends on a web of mutual support and trust, people depending on one another - and able to wield great power. Only an insider would be able to see what might have happened here, but any insider would be too close, too involved to see it clearly. Negotiating the fine line between the two, Harper has Nathan begin to doubt everything, everyone.

This was a satisfying mystery, with excellent, relatable characters and a credible, tightly woven plot which kept me guessing till the end. To a degree it revisits a theme from The Dry - the man who has bene ostracised from one of those remote communities - but in finding a different way to cope than did Falk, Nathan allows Harper to explore a different side of Australia, confronting some very basic human truths about survival, love and endurance.

For more information about The Lost Man see the publisher's website here. You can buy The Lost Man from Hive Books (supporting High Street booksellers), from Blackwell's, Waterstones (who are doing a signed edition) or Amazon. And from many other places as well. 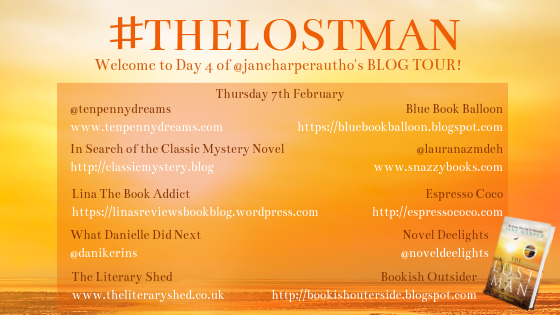