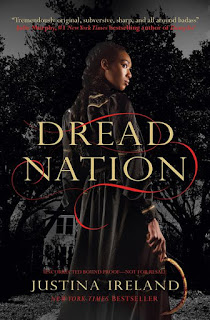 I'm grateful to Titan for a free advance copy of Dread Nation to read and review.

Sometimes when you're considering what to read, the description of the book can be its own worst enemy. Looking at Dread Nation, the phrase "walking dead" very nearly put me off - I've never really got the zombie thing (not that you'll find that world in this book) - but fortunately, on this occasion the cover came to the rescue, that depiction of a young Black woman in formal 19th century dress about to wield a sickle against... what? We may be told not to judge a book by its cover but in this case it really does represent the story very well.

This is Jane's story, Jane McKeene that is, a young women born in what are clearly very irregular circumstances on a planation in Kentucky during the American Civil War. As if that wasn't dramatic enough, history is about to take a swerve as the dead rise - Union dead, Confederate dead, any dead - and set about the living. (Ireland uses the term "shambles" for these revenants). The Civil War is soon put on hold as the country struggles to keep the dead at bay (yes, I do feel there's a metaphor going on here) and one result is combat schools for Native Americans and people of colour who are to bear the burden of the combat. (Odd, that...) Jane is one such, the star of Miss Preston's School of Combat. Needless to say, she's a headstrong, wilful girl who gets into a lot of trouble and is soon heading off on an adventure...

Despite my coolness towards zombies, I really loved this book. First, I enjoyed the way Ireland integrates her story fully with the politics and culture of the time, so it arises from the reality of people who were previously enslaved but now are barely free, and certainly bear the burden of prejudice. Having them co-opted by the authorities to the front line in the war with the shamblers encapsulates this brilliantly.

As Jane soon finds out, it's actually worse than that. The rules she thinks govern her life turn out to be worth little, with political machinations, criminal gangs and mad scientists rampant. Such stability as Jane enjoyed is blown to bits and she's left with little to rely on but her courage, her skill at fighting and an inner strength that derives, ultimately from her sufferings and her desire to be reunited with her mother.

In chapters punctuated by a somewhat Jane Austenesque correspondence between Jane and her mother, which contrasts with the grim and violent world Jane now inhabits, we see the consequence of that. It's pretty much nonstop action, some parts of which are very grim, but leavened by Jane's opinions on life, her narration of her earlier life (she's already survived at least three attempts to kill her) and - which I found quite moving - her solidarity with her friends, even those who've hurt her in the past. There are also insights into issues such as people of colour who can "pass" as White, and the cost of doing that and the maintenance of authority by perverted religion.

Besides the political/ cultural resonances of the story, I  also loved that Ireland takes an idea - zombies - which is often done in a modern, post-apocalyptic kind of way, and locates it instead in a different setting - but one which appeals strongly to the imagination, for example allowing the panoply of the Western (the bad Sheriff, the besieged town) to appear.

Add in the mystery of how the shamblers began, the equivocal role of several of the characters here, and the wider - and perilous - situation of humanity, and you get a roller-coaster of a book with plenty to grab the attention. Jane is heroic, the villains are satisfyingly villainous, behaving like brutes and spouting a vile everyone-should-know-their-place philosophy to justify their own privilege, and the threat of the shamblers is ever present.

Looking forward to reading the next instalment of these adventures!