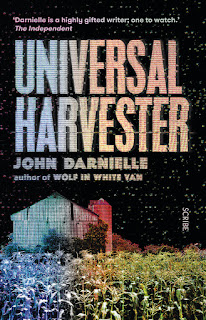 This is another book I finally managed to catch up with, and 'read' as an e-book. I think my experience of this book was really added to by listening to it, by the sense of complicity, Darnielle himself reading the story in an almost - almost - deadpan voice, making the most of its asides, its speculations.

In places, he refers to alleged alternate versions where something different happened and characters had quite distinct lives as a result and this gives the story a breathing, almost alive quality as do the hints that what we're told is the knowledge of an all seeing, all knowing observer with access to secrets, records and facts. (For example, in one place his characters decide to report something to the police - but, he then just in, we no that no such calls were received that evening - almost as though he had a file of evidence open on his desk).

That all-knowingness contrasts with the teasing, leisurely unwrapping of the central mystery here. Jeremy is a young man working, in the mid 90s, in a small, local video rental store in Iowa. So recent, and yet a different world, a world of clunky analogue technology on the cusp of being swept away.

One day, customers begin to return tapes to the shop, complaining that the films they rented contain... other material. Disturbing, strange material that it is hard to watch through. Gradually, Jeremy and then store owner Sarah-Jane, begin to be pulled into investigating just what is going on. We too are drawn in, learning nothing quickly but happy just to absorb Darnielle's prose: allusive, conversational, looping, deeply rooted (I think) in the prairies, the lives of ordinary people living in small towns and on grey farms and in the snows of Midwest winters. The story is as much about how Jeremy, Sarah-Jane and their immediate friends and family react to what seems a sinister mystery - how they avoid knowing and circle round the issue: the dynamics of groups of people not seeing or saying things. A lot of this book is about choosing not to know things about other lives.

And then the pitch rises and something bad happens - and Darnielle is away into the history of a certain character, taking the story into a wholly new direction, employing the same rapport, the same easy style and leveraging the trust built up with the reader to tell a rather different tale, that itself loops back and becomes relevant.

It's a book where you feel that little details count, although there is never a complete picture in which you can see how they fit. A story where the present feels very indebted to the past - whether the unknown past of the Native people who gave their names to places like Tama and Sioux City and Iowa itself, or the more recent past of which Emily wonders '...what shed'd already missed, what had gone missing from Iowa before she ever got there'.

If you ever listened to those Lake Wobegon monologues in A Prairie Home Companion and thought, 'Surely there must be something darker there?' then here it is, a breathing out, almost, of the Gothic.  It is in many ways a perplexing book, a tricksy book and I see that many reviewers on Amazon and Goodreads have confessed to not understanding it. I don't think I really understand it, either, but I do get it - if that makes sense. It's one of those rare books where 'understanding' is beside the point, you simply need to experience it.