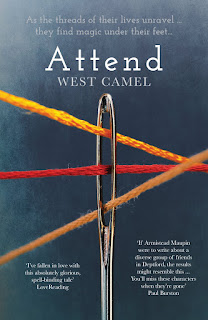 Today I'm joining the blogtour for West Camel's debut novel Attend, publishing tomorrow. I'm grateful to Orenda Books and to Anne for inviting me to take part in this tour and for letting me have an advance e-copy for review.

I have a habit, when I review books, of approaching them in terms of how they measure up to their genre. Perhaps this is lazy, but I find it can be a way into a discussion of a book (and of course the review doesn't stop there, I generally have much more to say!)

In Attend, though, West Camel is having none of this.

The book focusses on characters, and an area, with some criminal aspects, and indeed includes crimes. But it's not a crime novel.

At the centre of the book is an unfolding romantic relationship, unlikely and immediately at risk. But it's not romance.

There is a tang of the supernatural, but the book doesn't frame that as a major source of danger or examine how the protagonists overcome it. The book isn't really fantasy or horror.

And while one character's story takes us on a journey through the 20th century (including evocative scenes set in the London Blitz) it's not historical.

Nor is it some kind of mash-up, as is currently fashionable.

No, it's clear that Attend is very much its own thing. And what a thing... Set in present day Deptford, the story focuses on the present day lives of Sam, a young gay man discovering himself and trying to build a life; Anne, a middle-aged woman who's been in pain and recently managed to quit heroin, and mysterious Deborah, a (much) older woman who believes that she can't die.

So - we have a life opening up, a life being rebuilt and a long, long life with flashbacks to episodes in Deborah's history, Camel hopping years or decades so we often hear present day Deborah refer back to events that are only described later.

This isn't the story of Deborah's life, fascinating though that might be (she starts life being brought up in a charity hospital, then is sent to an orphanage, lives as a single woman first working in factory than in business on her own behalf, survives the Blitz... always an outsider, increasingly overlooked, ignored, Deborah is a bewitching character evoking sympathy, admiration and, often surprise).

These three lives intersect, cross and double back like stitches in a piece of work in a narrative that often makes use of the symbolism of needles.

As an addict, Anne has a great deal of experience of needles - they almost cost her her relationship with her daughter Julie and her grandson. Deborah is a seamstress and has a different use for needles. Hidden away in her strange two room house on the creek, she works and works at a "winding-sheet" (I knew what a winding-sheet was so this gave me a bit of a tingle, but in case you don't I won't say) and on copying and unpicking the strange "motif" she found as a girl on a piece of stitching given her by a mysterious, dying woman. Anne has struggled to control her life, to escape from her abusive ex-husband, Mel and to rebuild some relationship with her mother and daughter. Sam is experiencing life, with great gusto, but even for him there is a darkness, a thing in his past. He doesn't feel guilty about, of course not, but which sticks with him

We see needles in other places too - such as the spire of a church, or on sale in the sewing shop. As well as causing harm, they can be used to mend, to put things right. Deborah makes Anne a beautiful dress which helps her take her place in the family. But not everything can be mended. I mentioned crime above, and at the centre of this book is a dangerous, swirling tide of male aggression and territoriality. When it all gets out of control it's left to Anne, Deborah and Sam to try and mend things.

This is a gorgeous book, full of secrets, full of unexpected glimpses of the world - light reflecting off the towers of Canary Wharf, an upstairs room glowing blue-white in the moonlight, a house where nobody expects it, the physicality of sailing in a small boat on the Thames. At the centre is a mystery which is never completely resolved - indeed I'm not we can be certain if it was there at all, which is part of the book's allure - but which drives everything. I loved the matter of fact use that Camel makes of this mystery, this possible supernatural element - it's at once throughly grounded and unremarkable and also wonderfully strange, the strangeness slipping into the misty, tide-driven marginality of Camel's Thames estuary.

I'm in danger of gushing.

I just loved this book, I wanted it never to end, I still want to know what happens next - and what happened before - and what happened in the gaps between the parts of Deborah's story we're shown. Camel's writing is immediate, compelling and vivid, creating almost a sense of the Gothic in a modern London suburb (which is perhaps as close as I'll get to answering that "genre" question").

You can buy Attend from your local independent bookshop (including via Hive Books) or from Waterstones or from Amazon.