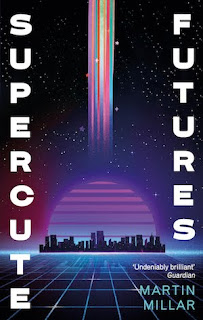 In a near future where the earth has been blighted by a series of disasters - human caused and natural - corporate culture dominates, with the top 19 conglomerates - the "C19" - at the top of the pile. Among these is Supercute, the empire founded by teenagers Mox and Mitsu in their bedroom, using an iPhone to create their own show which would feature not only fashion and music but maths, science and philosophy.

But that was decades ago. While Mox and Mitsu still present their show they're now at the head of an enterprise that not only provides clean water to near starving population, but makes arms. That doesn't just project an image of CGI "cuteness" but builds over nature reserves. That has virtually dropped its educational mission, and even has reserves of troops.

And the Supercute girls are barely human, having received augmentation after augmentation.

This was a grim view of the future indeed, and yet - in the obsession with marketing, glamour and image - rather plausible. In particular I found it didn't take a lot of imagination to accept the enfeebled governments, impoverished public realm and corporate chicanery. The latter is a key ingredient of the book, as a rival corporation, led by the ridiculous Moe Bennie, essentially hacks into Supercute to stage a hostile takeover. "Hostile", in the work, meaning something ultimately enforced by private armies, drones and missiles. Mox and Mitsu are challenged as never before by this, thrown onto the ropes and having to fight back for everything they've built.

That makes for a story which is essentially one drawn out chase and revenge sequence, mainly taking part in the abandoned, radioactive tunnels of the London Underground and in the various virtual "spaces" where Supercute and the other corporations hang out. The girls have to recruit some VERY disgruntled ex employees to help them, as well as some of the legion of Supercute Superfans around the world.

This was where the story got a bit squirmy for me, as I didn't really get the motivation of the ex-employees - Mox and Mitsu aren't, and don't really try to be, very persuasive to those who already have reason to distrust them - and the idea of billionaires recruiting help from the impoverished teenage girls living in refugee camps who seem to be Supercute's key demographic isn't really a very nice one. But I think that's possibly the point. When I first started reading the book I felt that M&M (sorry, I can't help that) were a bland and characterless pair, but I think what the book reveals is that's just a (cute) front. Underneath - and once out of the studio - they have bags of character, it's just they're not very nice at all.

Indeed, if you knew at the start what you learn by the end, you probably wouldn't care at all what became of them. The Supercute empire, which started with a commitment to real good - relief of suffering, empowerment, an educational purpose - has become nothing more than part of the corporatist apparat keeping the struggling masses down. Despite the intermittent attempt of the girls or of others to excuse themselves, it's clear there's been no real attempt to stand against this and I fairly quickly began to ask why should I care about them at all. But by then a VERY hectic chase was under way with it's own momentum.

The other difficulty I had with the story was the unlikely sequence of disasters which seemed to have befallen Earth to make everyone so miserable. Apart from understable things like global warming, and wars, we hear of a dramatic collapse in the ozone layer, numerous volcanic eruptions and tsunamis, accidents involving nuclear waste which have left much of the Thames Estuary irradiated and even a supernova. There is also talk of several "impacts" which I took to be meteorites or the like. I was waiting for some kind of rationalisation of this - have Supercute and the other corporations taken advantage of all these calamities, or did they somehow cause them? It seems too much, and too varied, for coincidence, and actually I think the global prognosis from what we already know is grim enough to motivate this future without the need for extra disasters.

So I do have some reservations. (I was also rather gobsmacked by the ending - Millar delivers a truly  "WTF happened there?" moment which will I think annoy those who think they're going to get a neat, clear conclusion. But I don't mind that, though I am still puzzled. I won't spoiler by saying what I think the ending meant,  but if anyone out there has any ideas, I'd be happy to discuss).

That said, though, it's not a bad read, it has terrific pace, it is short (I can imagine some authors making this two or three times as long, which wouldn't work at all) and, in its own terms, plausible.