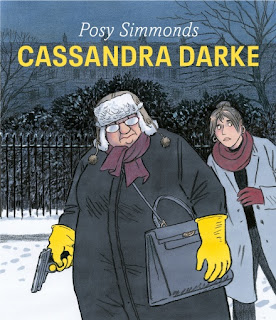 This book was a Christmas present (thank you!)

In Cassandra Darke, Simmonds uses the graphic novel format to create something resembling a scrapbook, juggling both panels and chunks of narrative (which sometimes contain, or flow round, single drawings or panes addressing points in the text, or linking with pictures elsewhere in the book). It's told from different perspectives, with the main protagonists (Darke and her niece Nicki) unaware till the end of some parts of each others' story. This reinforces their different points of view, oddly building sympathy for these very different women (who don't actually like each  other very much).

Darke is a London gallery owner, something of a monster - snobbish, offensive, aggressive to everyone and, as soon emerges, not above breaking the law. She's also magnificent - unapologetic about how she lives her (fairly unconventional) life, she refuses to be defined by others' expectations of, and assumptions about, her.

What she isn't, though, also matters a lot - Cassandra doesn't really 'do' people and has no patience, especially, with the young. So her stepdaughter Nicki coming to stay always seemed likely to end badly.

As the story opens - with Darke's, er, dark secret, discovered - that period is coming to an inevitable end so we get Cassanda's conclusions about it first, but Simmonds then hops back to show what had been going on, including things Cassandra doesn't yet know, before returning to the consequences in the present. In between, she cooks up a complex, fast moving tale encompassing, among other things homelessness, male violence towards women, criminal gangs and the 'empty quarter' of London where luxury flats lie empty in the ownership of foreign oligarchs. Through it all, Simmonds' evocative pictures transport one to all these different Londons - whether to Cassandra's sleek, modern-styled house, to pubs and bars where chancers rub shoulders with upright citizens and outright villains or to the even grubbier areas (where Cassandra really meets trouble).

It is a powerful book, clearly inspired partly by A Christmas Carol (the misanthropic central character forced to accept that they are, indeed, part of humanity, the sense of redemption, some echoes and parallels in the way the story evolves) but much more than that, engaging with the realities of (especially) modern London and picking its way through social norms and conventions (watch how Billy's accent changes). The detail of the illustrations gives plenty of scope to read and reread, always with more to be found (another parallel with Dickens!)

I'd thoroughly recommend this book.

(CWs for some violence towards women and a scene with a dog).