Review - Beyond the Bay by Rebecca Burns 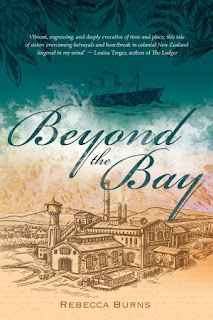 I'm grateful to the author for an e-copy of Beyond the Bay for review.

Set in late 19th century New Zealand, this is a story of two sisters, Isobel and Esther. Isobel emigrated from England ten years earlier - now Esther is coming to join her in the well-appointed townhouse she's been told about in Isobel's letters.

Reality is rather different.

Isobel, or Bella as she's now called, doesn't live in a fine house but in a one-room cottage set between an abattoir and a carpenter's workshop. The walls are papered by old newspapers gummed down with flour and water, and Esther will be sleeping in a bed made from packing crates. Worse, Isobel's husband Brendan - who seemed so dashing and enchanting back at home - has become (or always was...) abusive drunk. For many, life is hard in New Zealand, and it's difficult to find contentment when everything is being judged against a rose-tinted memory of "home". The place seems to work on the character, exposing underlying meanness in some and generosity, empathy and warmth in others. Ten years in New Zealand have "formed" Bella from Isobel - there are many references here to the making of new women, as with Isobel when subject to "The rattle and surge of carriages and Cobbs".

Esther brings her own problems with her, though, and if she thought that Isobel would have the money or the time to help sort them out - well, she was wrong.

I loved the way that Burns sets up the situation of the two sisters, both looking back to their lives as girls and telling the story now from both their perspectives, sometimes carrying on the same incident or event from one to the other so that we get a compound view. This also gives plenty of scope to explore what went wrong and to explain why the two are somewhat prickly with one another. There are lots of agendas and secrets here, but they're set against the crushing demands of living in a hard world - the colony isn't a forgiving place, even if it has a fancy new Opera House and a lively politics. (The background to the story is the struggle for womens' suffrage, Isobel having joined the campaign much to Esther's amazement).

The story is set in the same "world" as Burns' earlier collection of interlinked long-short stories, The Settling Earth, (my review here) with one or two of the characters from there mentioned and a particular incident forming a counterpoint to some of the themes here. Burns also makes an allusion to the role of her women ("They've worked with men in settling the earth"). That means the reader, if they know the earlier stories, can't help but feel a certain depth, a richness, to the world described here (though you don't need to have read them to follow Beyond the Bay).

Without being preachy, this book starkly illustrates the dilemma of so many of the women portrayed, whether they are penniless settlers, have inherited or been gifted a bit of money, or have an apparent degree of privilege with wealthy parents. Despite being on the cusp of winning the vote, they are controlled, manipulated or outright bullied by men of all types, denied choice and agency and - as illustrated here in a heartbreaking scene - literally unable to say "no". The book also explores the solidarity and support that's on offer from other women, but makes clear there are those who would deny it, especially when personal motives and desires complicate things.

If the first half of the book is dominated by the claustrophobia of that cottage, the second part opens things up more with a dangerous journey to a remote farmstead and a bit of a theme of people (women especially) being able to enjoy a degree of freedom and opportunity ("...in New Zealand women built homes with their bare hands and, in the back country, ran farms and homestead...") I won't say too much about this part because it would be slightly spoilery to give away the reasons for this, but the journey does give that part slightly more structure and shape and there's quite a bit of action. The ending felt to me as though Burns was leaving things open for a sequel, which I'd certainly read - these are characters who grow on you and who you want to spend time with.

Overall this is an absorbing read, wise and human where it exposes the truth of womens' lives and also providing a warts-and-all account of the early years of settlement in New Zealand. I'd strongly recommend it.

Rebecca Burns is an award-winning writer of short stories, over thirty of which have been published online or in print. Her short story collections - Catching the Barramundi and The Settling Earth - were both longlisted for the prestigious Edge Hill Short Story Award, the UK's only prize for short story collections. The Bishop's Girl, her first novel, was published in September 2016. Artefacts and Other Stories, her third collection of short stories, was published in September 2017. Beyond the Bay is her fifth published work. She was nominated for a Pushcart Prize in 2011, winner of the Fowey Festival of Words and Music Short Story Competition in 2013 (and runner-up in 2014), won the Black Pear Press short story competition in 2014, was shortlisted for the Green Lady Press Short Story Competition in 2015, and was either short or longlisted for the Evesham Festival Short Story Competition, Chipping Norton Competition and the Sunderland Short Story Award in 2016. She has been profiled as part of the University of Leicester's 'Grassroutes Project'-a project that showcases the 50 best transcultural writers in the county.

You can buy Beyond the Bay from Hive Books, Waterstones, Amazon or from the publisher.