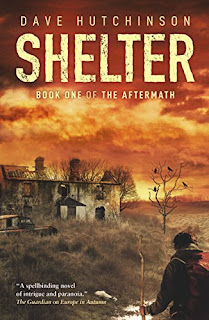 I've always been fascinated by the period in British history that used to be known as the Dark Ages. That name is used less now as it's been accepted that chaos didn't descend when Roman rule ended. Nevertheless there were huge changes - the loss of manufactured goods, of widespread trade and of currency.

Set a hundred or so years after the destruction of modern civilisation by an asteroid strike known as "The Sisters", Hutchinson's new book takes a look at what one might term a modern "Dark Ages". As in the 5th century, we see here little bands of survivors eking a living among the ruins, keeping farming going but with no modern manufacturing. Here, as then, there are surviving patches of control and order where military formations survived, and others where local strong men establish little kingdoms.

It was the age of Arthur...

Adam is - what? A spy? An explorer? - for Guz, the realm, polity, city-state, call it what you will, that emerged from Portsmouth naval base. In this book he's sent on a mission across country to investigate a rather nasty warlord who has established himself in Kent. Adam is a resourceful sort, self reliant, careful, tough, and me makes a good viewpoint character as we see what our world has become, six or seven generations on.

Hutchinson is good at letting his story unspool, showing us the territories Adam is going through and the character of their residents. As well as Kent there's an agricultural enclave on the Berkshire/ Oxfordshire border (there's some kind of trouble further north in Oxford and the Cotswolds, we never find out exactly what) where much of this story takes place. It's not, though, an idyllic, Hobbiton sort of place. Rather, The Parish is rent by jealousies and grudges and ready to erupt in civil war. Inevitably Adam becomes involved in this but I won't say any more about the detail because that would give away rather too much.

This part of the story shows off rather effectively, I think, the "nasty, brutish and short" lifestyle which we all fear will befall us should civilisation stutter. The way Hutchinson chooses to animate the conflict here almost made me gasp - he's certainly not sentimental about his characters, and what happens shows, perhaps, that the term "Dark ages" really does describe this world.

If that's the bad news, the good is that there will be more books set in this universe - the next, Haven by Adam Roberts, is due in August. Hutchinson and Roberts are clearly having fun - as well as an Adam in this book the second has a "Forktongue Davy". Roberts, of course, has form in depicting apocalyptic, futuristic versions of Berkshire (see for example his New Model Army) and Hutchinson's Fractured Europe sequence (I think it's now a five book trilogy) shows a continent divided into petty states and autonamous holdings, so together they seem almost destined to produce something like this.

Very thriller-y, very violent, pretty dark and with hints of wider developments - whether it's the inherited nukes of Guz, the strange "Spanish fleet" moored off the coast or those mysterious goings-on to the north - I sense a lot more to come fro this world, and I'm looking forward to that (not least because I think I live in the path of one of these roving war bands and I need to know what's going on!)