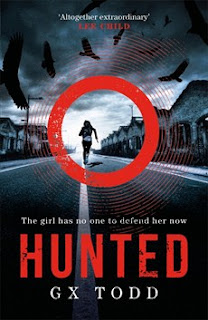 I'm grateful to the publisher for an advance copy of Hunted (and - full disclosure - the previous book in this series, Defender, quotes my review).

Todd's previous book, Defender, was an outstanding example of post-apocalyptic storytelling - scary, searing and convincing. Hunted manages - and I don't know how she did this - to be better still. The story corps effortlessly from passages of grim realism, almost miniature documentaries on the breakdown of society under the onslaught of the "Voices", to dreamlike sequences threatening carnage and pain or moving passages showing how even in an upside-down world, love still endures.

The Voices brought death and destruction because they urged killing or self-killing. Those affected, even if they didn't commit violence, are deeply mistrusted by the survivors, tracked down, tortured and murdered. If you have a Voice you try to hide it.

Across a landscape of a ruined United States, we follow three groups of survivors trying, in their different ways, to live in this new, changed world. Posy leads a group of hunters, tracking the elusive woman Red. There is something a bit... off... about Posy, about his relationship with his own Voice, and with the terrible Flitting Man. He drives his ragtag team unmercifully, but his goal is obscure.

Albus and his group of survivors live at the inn by the Sea, hinted at in Defender. His abilities allow him to locate and save the lost and wandering, building a team that can travel in the nightmare world of these books - but again, why and for what purposes?

Lacey, Alex and Addison featured centrally in Defender and are in a sense the hinge of the book, fleeing across a cursed landscape (but escaping what? And going where?) They have made enemies, their friends are dead, but the three (two women and a girl) are coolly competent, survivors. They take some time to make their appearance, Todd holding back these most familiar - and most relatable - figures from the first book almost till the middle of Hunted and dwelling instead on Posy and Albus.

The stories of these groups are woven together into a complex timeline that isn't afraid to dip backwards and forwards. As a result there's a somewhat mythic sense, a distancing effect, through much of the book - seeing the aftermath of an awful event before the event itself both reassures (you know that everyone survived) and appals (when the event itself begins you know it will be bad because you've seen the post-trauma). At the same time, the dreaminess and a creeping understanding of the Voices (not complete, not yet, by any means) adds to the overall sense of gathering dread.

Todd is a brutal author. She holds little back when it comes to heaping suffering on or killing off her characters. Even the ordinary lives depicted here - I use that word advisedly - are bleak; doomed, starved, hopeless people shuffling through a withered, hopeless world. It isn't a zombie apocalypse by any means but the depth of suffering, the wrongness depicted here, is much, much worse making that almost seem like a cosy genre.

And as we see in Hunted the madness and destruction is not over, rather it's getting worse. More akin, perhaps, to Lord of the Flies than anything else I've read, the story takes a dark view of a humanity released from social conventions and tormented by apocalyptic, teasing, haunting visions.

While there are grains of hope here, the book can make for hard reading at times, but it is also at these times it's hardest to put down.

I know this book will stick with me. I'd strongly recommend you read it.