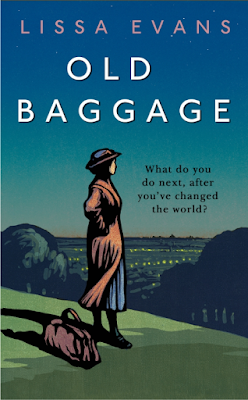 I'm grateful to the publisher for an advance copy of Old Baggage.

It is 1928. Matilda Simpkin, rooting through a cupboard, comes across a small wooden club – an old possession of hers, unseen for more than a decade...

This book is a prequel, of sorts, to Crooked Heart, in which we follow the story of young Noel in the early days of the Second World War after the death of his eccentric (though rather wonderful sounding) godmother, Mattie.

Old Baggage tells us more about the fascinating Mattie. She has led a turbulent life, including activism as a Suffragette, but when this story opens, in 1928, she's living a quieter life near Hampstead Heath with her companion Florae ("The Flea"). There are glimpses of past glories: Mattie's house was a refuge for women playing the deadline game of "cat and mouse" with the authorities at the height of the campaign for the vote. There are also regrets: that women' suffrage is still not universal (Florrie has never been able to vote, because she fails the property qualification), that the militant campaign was halted in favour of the War Effort.

Lissa Evans evokes very well the sense of chaffing, of stasis, that affects one who has taken part in significant events but is now sidelined. (This calls forward to a theme explored in Crooked Heart where we meet another stalwart suffragette in reduced circumstances during the Blitz). Faced with this, and after meeting an old comrade whose activism has taken a sinister turn into fascism, Mattie sets out to educate the girls of the district by founding a wonderful, anarchic outdoor youth group. Telling the stories of the suffragettes and of great women from history, teaching use of the javelin and the slingshot, and encouraging the young women to further their education, gives Mattie the focus she needs. And if it results in a little healthy competition with the rival, and hated, Empire League (which believes in smartly polished boots and the expulsion of foreigners) then what can go wrong?

This is a sharply observed, often comic, but also deeply sad story. We see - in flashbacks - something of Mattie's early life and come to learn about her strengths and but also her weaknesses. (Ida, one of the young women swept up in her wake, points out that however much Mattie's heart is in the right place, she does;t understand the difference having money has made to her). In the end her greatest weakness is all bound up with family and with her lost, adored brother Angus, of whom she can believe no wrong - a belief that warps her judgment in the end and risks the purposeful life she's built.

Old Baggage - the name cleverly combining an insult that might be used of a woman like Mattie and the idea of clutter from the past dragging one down, both themes of this book - is a fairly short book, just over 300 pages, yet it ranges widely. Evans gives us vignettes, showing Ida bogged down by her passive-aggressive mother who doesn't want her bright daughter to progress any further than she did, or at her 'continuation school', or Florrie at her work as a health visitor, trying to ameliorate the desperate tide of poverty and ignorance of the inter-war years. There are also Mattie's reminiscences, especially when she encounters a childhood friend, and glimpses of at least one other character from Crooked Heart (which I think I need to go back and reread now that I know more about Mattie). It's a very effective technique, allowing the book to cover much more ground than you would expect.

Coming a century after that achievement of the first votes for women - but at a time when the struggle for equality and decent treatment is clearly still raging - it's a also a salutary read, highlighting many issues that are still current, such as the man who seems a staunch ally, even being arrested and sent to prison, but whose motivation is at least in part to get close to all those women, or the women who hold other women back, or the consequences of an untimely, unwanted pregnancy. Or a shout from a man in the street:

"'Give us a smile, girlie,' said the bus conductor.

She could have bitten him."

Yes, there have been improvements.  Mattie reflects how "Long ago, as a child in a pinched and stifled  century, she had seen her own mother gradually disappear." But despite these, Mattie and a friend can't, as "unaccompanied" women, be served in a bar. Florrie still cares for wives whose husbands won't have any truck with contraception. And one of her colleagues accepts that if she marries, she'll have to give up work. many obstacles remain and perhaps Mattie's frustration at the start of this novel is her sense of that - and of having ceased to push forward, instead recalling old glories and giving her magic-lantern lectures about the struggle. All that old baggage.

It is simply a great read, peopled by larger than life characters who almost jump of the page to hold your attention. Deeply engaging. I hope that Evans might return, again, to these characters, telling us more about Mattie's earlier life, or Ida or Inez's future, or perhaps more about Noel (who also features here though to say how would be a spoiler).

I'd strongly recommend this book.