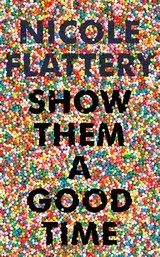 I'm grateful to the publisher for providing me a free e-copy sampler of this book via NetGalley. I have now bought a copy because the two stories in the sampler, "Not the End Yet" and "Track" were so good. As I read the stories I will update this review!

In these stories, Flattery combines a sense of reality, of literalness with a feeling that the fantastical may be about to come round the corner. Her protagonists reflect this, seemingly ordinary at first but revealing depths as the stories develop a dialogue with something else (for example the strangeness of the times, in "Not the End of the World" and both a traumatic personal history and a frustrating relationship, in "Track".)

In the first story, "Show Them a Good Time", this weirdness in the ordinary is conveyed both through the style and references than the plot or events. The protagonist, an unnamed young woman who has returned home after some time spent with a dodgy boyfriend in the city, has been placed on a scheme intended to fit her better for work. The job seems to consist of hanging around at a garage, doing very little. it isn't even clear whether the place is an actual, functioning business or just a  place to be. There are references to "Management" and to some co-workers but the tasks seem minimal and the most notable event is when "Management" places some chairs on the forecourt and locals begin turning up to watch what happens. There's an air on unreality throughout - I don't know whether this reflects the protagonist's damaged state due to what happened to her in the city (as everything is refracted through her point of view) or some objective state of this world, but is was subtly unsettling.  Being told for example that she and co-worker Kevin watched the adjacent motorway "opening and closing in front of us like an accordion" raises the question of whether this is just a way of describing the criss-crossing of car movements, and if so whether it says something about her state of mind, or whether it's meant to suggest something "real" in which case - what? This sense of ambiguity underlies everything in the story - the relationship with Kevin, the sullen reactions of other colleagues and old friends and, above all, the ending, which was freighted with the sinister.

"Not the End of the World" teases because we only slowly begin to learn of this wider dimension. Angela, a schoolteacher in her early 40s, dates a string of unsatisfactory men. The approach is almost formulaic - she takes them to the same restaurant each time, introduced in the same words, there is odd conversation, revealing more about the state off the world (bad) than about the couple, they may have sex (in one case, the man, all fragility and huff, pretends they did) and we see, I think, a progressive decay in things expressed through the restaurant staff. At first they're just teenagers. Later, they wear their restaurant outfits over military uniforms, 'expecting to be called away at heroes' notice'. Later still, they wear 'stained vests'.

Because things seems to be going to the bad. At the start, Angela denies hotly to herself that she is someone whose life has 'gone to shit'. Yet it seems as though it has, though not perhaps because of anything she did, the world itself seems to have gone that way. Angela's school class has melted away, the supermarket shelves are mostly empty and the book has a tangible sense of decay with everything muddled, temporary and alarming. There are wars and rumours of wars. Whether Angela's  dating is an attempt to escape this, or to fully engage in the spirit of the times isn't clear. She seems to be serially disappointed ('the realisation invariably arrived that this man was not a package at all: he was an envelope, an envelope with a bill in it, an envelope she, quite frankly, wanted to put in a drawer and forget all about') and yet forces herself to enjoy her experiences: 'It was the last good fee,ling, to look across a table and know someone else was terrified too'.

What they might be terrified of, we, perhaps, learn, casting a slightly different light on what Angela's doing.

A bitter, involving story which finds beauty and even humour in sadness and bad times, deftly pulling together the intimate and small with the global and the external.

"Track" is a story which also has an air of melancholy, indeed it seems to drip sadness from... something... that's never quite explained. The narrator, a young Irish woman in New York, is with an ageing comedian, past his prime and trying to rekindle popularity for his TV show by endlessly listening to 'The Track". The exact nature of it is never explained but I think it may be canned laughter, or possibly some classic comedy routine? Whatever it seems to drive a wedge between the two and soon the young woman is online at night, posting anonymous, and venomous, reviews of her partner's act.

As the story proceeds, she seems to fall into depression, remembering that something that happened back in Ireland, a hospital, her mother. Her life becomes more and more nightmarish. At there start, she, not-famous, was happier walking round New York than him: he saw only rejection, she saw takeaway coffee, croissants, and souvenirs. By the end of the story she's walking without purpose to who-knows-where although perhaps with a feeling of release.

In a few pages, Flattery makes these protagonists very, very real, circling around both common ground and differences between them - her Irishness, for example, which seems to bring a whole train of cultural bag while for her 'I didn't want to rely on it too heavily, do that while bit, degrade myself'. Beyond that, though, it's a clever, twisty story that has stayed with me after reading and left me thinking.

Deeply enjoyable stories with a lot of hinterland and a dark sensibility. I'd strongly recommend.

For more about this book, see the publisher's website here.