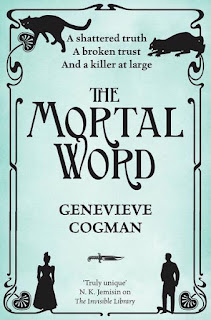 I'm grateful to the publisher for an advance copy of The Mortal Word.

Cogman's Invisible Library books have quickly become one of my favourite fantasy series, and she has covered so much, and created such a vivid world, that I'm slightly surprised to see that this is only the fifth of them.

The Mortal Word takes us to a Belle Epoque-ish Paris, complete with grand hotels, risque theatre, anarchists - and plenty of danger. A vital conference is being held, which could shape the future of the worlds - but someone wants it to fail, and is prepared to kill, if that's what it takes.

Questions abound. Irene Winters and her associates, Vale, the Great Detective and Kai, prince of Dragons, are summoned to investigate. But due to the dainty diplomacy in train they will also have to work with a representative of the Fae. With so many agendas and rivalries, can the team stay together long enough to outwit the unseen enemy - and is the Library itself as blameless as Irene would like to think?

What are the Fae up to?

What are the Dragons up to?

What is the Library up to?

This book is really fun. I'm noticing a tendency for Cogman to use her many-worlds device to accomplish something a bit more like time travel, taking Irene off to the Prohibition ere in the last book, and now to a romantic, gilded version of Paris where Marius and his revolutionary students cold be gathering round the corner and the Phantom of the Opera lurking in the building opposite. It's deeply atmospheric and enjoyable, but there is more here - a devious, fiendish plot and, for Irene, some real moral dilemmas.

Just what is she prepared to do to advance the aims of the library? As a trained thief, quite a lot - we know that already. But if the library asks too much, what can she do?

The whole situation is enmeshed with Dragon and Fae politics, which Irene needs to understand if she's to save the day, and Cogman only unpicks this slowly, creating a real sense of mystery as well as some heartstopping confrontations and combat. (These generally seem to come as Irene is about to get to sit down and eat - by the end of the book I was just desperate for her to get a square meal inside her).

As well as peril, there's romance too, as Irene tries to advance things with Kai - not easy when they are surrounded by sharp eyed diplomats from all factions - and I won't say how that turns out, you'll have to read the book! And that, really, is all I should say. READ THE BOOK. It is a wonderful confection of delights, a book that will have you sitting up into the small hours, holding your breath at times, guffawing at others and maybe shedding a few tears.

As I said, wonderful fun. Five books in, this series shows no sign of flagging - and I can't wait to see what's coming in the next one.

The Masked City
The Burning Page
The Lost Plot