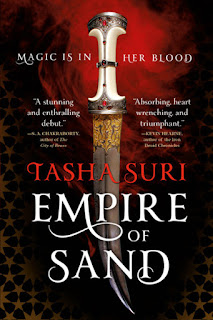 I'm grateful to Nazia at Orbit for an advance copy of this very impressive book.

In this, her debut novel, Tasha Suri draws a convincing world, a vast Empire sustained by chanting mystics who have bound the gods themselves with their prayers. A land of spirits - daivas - and dreamier. A land of cruelty and absolute power. It's peopled with real, convincing characters who are caught up in chains of privilege, prejudice and birth. And it's a world where there is real peril, both physical and spiritual - what if the price of saving the world is engaging in heresy, in blasphemy, becoming what you hate? Here, vows and contracts are made into real, tangible forces which constrain actions and compel obedience - and have consequences.

Mehr is a privileged young woman, daughter to the Governor, given everything she needs - except for freedom, except for a mother. Loved by her father but kept safe in the palace, hated by her stepmother Maryam, she is one of the despised and hated Amrithi, persecuted by the Empire her father serves and safe only so long as her secret is hidden.

But with jealous Maryam watching it's only a matter of time before Mehr's stubborn  attachment to the forbidden rites of her mother's people will lead her into trouble...

This fantasy novel was like a breath of fresh air (well, hot desert air). It's a world away from fur clad barbarians, dark lords and chainmail, instead cleverly showing the dilemma of a conquered nation, an outcast race. In that sense I was reminded somewhat of Seth Dickinson's The Traitor Baru Cormorant, in another, I saw the same dilemma of an apparently privileged person, a ruler of sorts, as in Le Guin's The Tombs of Atuan - which is apposite because Mehr, like Tenar, finds herself with a role in a dreadful temple, trafficking with old powers and in great danger.

The book has a complex heart, with Mehr genuinely torn; between the man she's been made to marry but is coming to love, the clan she has never known, never been part of, the woman who could have been her mother, and her missing friend, Lalitha. Oh, and fear for what the ruthless powers of the Empire - including the priest Maha - may do to her family if she doesn't submit. Mehr is in a truly terrible bind, with no-one to turn to but her husband Amun - who is himself enslaved to the Maha and unable to help her.

It's a truly exciting book, taking one from the depths of despair to a sense of hope as Mehr tries to salvage something - anything - form the wreck of her privileged, soft life; whether the safety of her father and sister, a little bit of friendship in the grim temple, or the joy of performing the ancient rites of her people under the very noses of their enemies. But all this seems vain, and hope drains away - the Dreamfire is coming and it may consume Mehr as it has others.

This an assured debut, a riveting and thought provoking book written from a woman's perspective, that of Mehr, a truly memorable hero who may feel despair but who will never give up. While she is, in various ways, controlled by men around her (because they have power, because they have tricked her, or because of the laws and customs of the society) there's never any doubt who is at the centre of  the story. Mehr's father may have great power but is absolutely under the thumb of the Emperor. The Maha has great spiritual and magical resources but is dead inside. Against them is a gallery of glittering and complex women characters - whether allies or enemies of Mehr's - who really drive this story along. But I'd also mention Amun, who shows a distinctive strength is respecting Mehr's autonomy despite the vows that bind him.

I'm delighted to see from the interview included at the end that there will be more from Suri about this world. There's clearly a lot still to explore and I want to read about it all soon!

You can buy Empire of Sand from your local independent bookshop here via Hive, or from Waterstones, Blackwell's or Amazon.
Email ThisBlogThis!Share to TwitterShare to FacebookShare to Pinterest
Labels: 2018, empire, Fantasy, magic, Orbit, people of colour, Tasha Suri, women