Today, I'm joining the blogtour for SJI (Susi) Holliday's new gothic creeper, The Lingering. I'm grateful to Orenda Books and to Anne the tour organiser for an advance copy of the book to review for the blogtour.

This book really resonated with me, and I'm delighted to welcome Susi and Orenda Books to the Balloon!

Married couple Jack and Ali Gardiner move to a self-sufficient commune in the English Fens, desperate for fresh start. The local village is known for the witches who once resided there and Rosalind House, where the commune has been established, is a former psychiatric home, with a disturbing history...

A few miles from where I live there is a former Victorian asylum, long one of the main institutions in Berkshire but converted four or five years ago for housing. It stands on the the edge of a village, surrounded by fields and now turned into flats, with houses in the grounds. Several years ago my wife and I went to take a look with our daughter, then in her mid teens. This was really for something to do more than any serious intent to buy.

If you follow this blog or my Twitter keenly (you don't follow this blog or my Twitter keenly) you may already know that Daughter has autism and profound learning disabilities. She doesn't speak; we are not really sure how much language she understands but she certainly wouldn't have understood from us what that place had been. It seemed nice enough, with lots of greenery outside and some nice modern design in the flats yet she took against it and wouldn't step inside for a moment.

I don't want to get all spooky here but I think there is such a thing as the power of place. That building must, I imagine, a hundred of so years ago, have had a number of residents just like my daughter her and I think she sensed something of that.

There is such a thing as the power of place, whether it be the knowledge of what's happened there, awareness of the sorts of people associated with a place, or something less tangible, something impressed on the place itself. It is something that SJI Holliday draws on heavily in The Lingering, which is set in such a former asylum, albeit one now housing a New Age community, "Our Family".

The empty wards and abandoned equipment.

It all makes for a troubling atmosphere, even as we read extracts from Smeaton's (the leader of the group's) "Book of Light" asserting the power of positivity.

There is, though, more to the Gothic than the physical lumber of our dark imaginations. Without credible characters you just have so many draughty rooms and bumps in the night. And it's with her characters that Holliday makes this book so hellishly creepy. Ali and Jack are coming to Rosalind House, seemingly for sanctuary and a new start far from their past lives. But, of course, they can't help but bring those lives along for the ride. Why has Smeaton welcomed them so enthusiastically? And why is Angela so fascinated by them - why is she spying on them?

The really scary, Gothicness of this book is the tangle between the secret lives of Rosalind House's  residents. Their secrets, lies and intentions. There's an almost visceral sense of something wrong (what?), of pressure building, of something about to give way (but again, what?) And while we may be forming suspicions, it's impossible to tell who is innocent, who is guilty, who is manipulating, coercing, controlling in this self-enclosed, inwardly focused community.

Above, where it might all lead, as events spiral beyond anyone's control - even the master manipulator's.

With all this in play, the actual hints of the supernatural, and the reasons for it, are almost superfluous. I'm not sure any ghost could match the depths of evil of an actual, living, human being but the genius of this book is to keep open the channel between the two, as it were, blurring realities, reversing causes and effects and then - in a truly audacious twist - turning the whole thing upside down.

It's a nailbiting story, a nailbiting ghost story, and I think Holliday is going to keep many readers up  into troubled early hours with this book.

SJI (Susi) Holliday is a pharmaceutical statistician by day and a crime and horror fan by night. Her short stories have been published in many places and she was shortlisted for the inaugural CWA Margery Allingham prize with her story ‘Home from Home’, which was published in Ellery Queen Mystery Magazine in spring 2017. She is the bestselling author of the creepy and claustrophobic Banktoun trilogy (Black Wood, Willow Walk and The Damselfly) featuring the much-loved Sergeant Davie Gray, and has dabbled in festive crime with the critically acclaimed The Deaths of December. Her latest psychological thriller is modern gothic with more than a hint of the supernatural, which she loved writing due to her fascination and fear of ghosts. She is proud to be one of The Slice Girls and has been described by David Mark as 'Dark as a smoker's lung.' She divides her time between Edinburgh and London and you will find her at crime-fiction events in the UK and abroad.

You can buy The Lingering from your local independent bookshop via Hive Books, from Waterstones, Blackwell's or Amazon (UK) or (US) and of course from many other places too.

(Finally - and I know I am a shallow person - but isn't that cover amazing? It makes me feel dizzy just looking at it...) 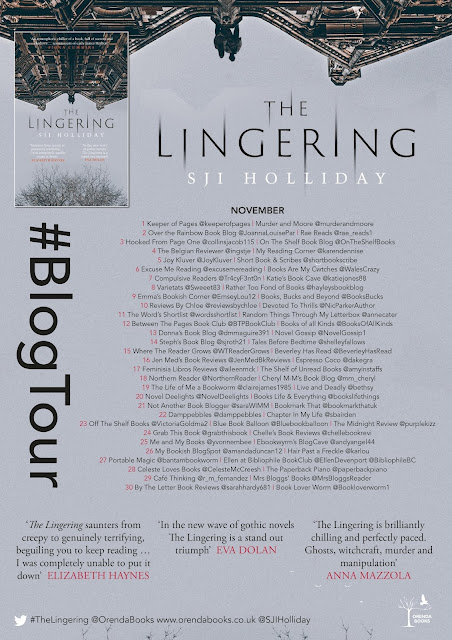