This is my final review as part of shadow judging the The Sunday Times / University of Warwick Young Writer of the Year Award. I am part of the Shadow Panel which will make its own choice from the shortlist for the award.

Julia Armfield lives and works in London. She is a fiction writer and occasional playwright with a Masters in Victorian Art and Literature from Royal Holloway University. Her work has been published in Lighthouse, Analog Magazine, Neon Magazine and The Stockholm Review. She was commended in the Moth Short Story Prize 2017, longlisted for the Deborah Rogers Prize 2018 and is the winner of The White Review Short Story Prize 2018. 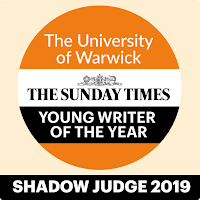 In her brilliantly inventive and haunting debut collection of stories, Julia Armfield explores bodies and the bodily, mapping the skin and bones of her characters through their experiences of isolation, obsession, love and revenge. Teenagers develop ungodly appetites, a city becomes insomniac overnight, and bodies are diligently picked apart to make up better ones.

The mundane worlds of schools and sleepy sea-side towns are invaded and transformed, creating a landscape which is constantly shifting to hold on to its inhabitants. Blurring the mythic and the gothic with the everyday, salt slow considers characters in motion – turning away, turning back or simply turning into something new entirely.

salt slow is a collection of Armfield's short stories, mostly with a fantastical element. There are nine stories in all, which in varying ways make a metaphor, an inner condition or aspect of being real. That might mean losing the ability to sleep when that sleep takes physical form and steps away, incarnating a Valkyrie-like feminine force as a rock group on tour or expressing the tension and mourning of one's parents breaking up by taking on the nature of a wolf. They're stories that centre young women's experiences, that take the time to express their feelings, indeed to personify those feelings.

Every one of the stories is a joy to read. My favourite was Formerly Feral which begins 'When the woman who lived across the road adopted a wold and brought it to live with her...' It just gets - beautifully, richly - stranger from there. The words 'adopted' and 'live with' mean a bit more than they sound. The wolf is treated as a daughter, dressed and bathed. At the same time there's no twee anthropomorphism, the narrator quotes handbooks and articles which advise against wold-ownership and the book makes a lot of its animalism, from the smell to the biting. At the same time it explores the affinity between the narrator, whose parents have split, and the animal, blurring the boundaries between the two and finding unexpected common ground. I just loved this story.

Mantis is a closely observed story of a young woman in adolescence, her experiences at school, her
hopes and fears and thoughts about life, boys and her body - framed as a concern over having bad skin. All sorts of applications and treatments are tried, and family history evoked: the (never named) narrator's family is invoked, it's a genetic thing, and we hear about her grandmother (a 'party girl'). Is that genetic as well? Is that why the references to a grandfather are so enigmatic ('Your Granddad wasn't around by that time'). I thought I could see the fantastical premise that was coming, but it's a tribute to the power of Armfield's writing that even as it looms she keeps a balance between the believable, psychologically right feeling of her narrator and the ultimate destination of the story. It all fits together.

In The Great Awake, Janey narrates a worldwide change, as one by one, city-dwellers lose their Sleep. That is, a part of them steps away. The Sleeps are like silent, annoying houseguests who lurk, never speaking, rearranging one's books or studying the rugs or bickering with each other - but their visibility, their separateness, denies their (what? Owners?) the ability to sleep at all. It doesn't happen to everyone, not at once, and those who are missed begin to feel left out. Like a milder version of a John Wyndham catastrophe, Armfield draws out the implications of having the Sleeps around, the 24 hour society that forms, the dilemmas and betrayals that results, and the personal impact.

The Collectables is... kind of a horror story. A group of women, graduate students, sharing a house, order pizza and decry the men who have, in various ways, treated them badly. But, they admit, those men all had some good features. Isn't it a pity you can't take just those things and put them together in a single man? Given the crossover here between yearning emotional truth and the real, that poses a challenge which one of the women takes up.

Stop Your Women's Ears with Wax is - as the title suggests - somewhat myth influenced. Mona is a filmmaker attached with an all-women band on tour. As the coach slogs from Manchester to Liverpool, over the sea to Ireland, to York, to London, a strangeness sets in. Gruesome events happen in the tour's wake, and the group's female fans rampage. Details blur - Mona's not sure how she joined the tour - and anyone who crosses them suffers misfortunes. Again in this story Armfield holds the mundane and the mythic in balance, crossing glimpses of the strange with streetlights and motorway services at 2am.

In Granite, men are fragile, hard to love because they 'are not built to withstand the same internal pressures'. Nevertheless, Maggie fall for one - late, and she never thought it would happen. Will she be careful enough with him? Can she? I think this story beatifically exposes the fragility and delicacy of a relationship, despite (or because of) it being all-consuming, and the helplessness one faces in the faces of the the world, of others outside who will impress their own presuppositions on it.

Smack does a similar thing. It has less of the fantastical about it than many of the stories here - the sudden stranding of thousands of jellyfish aside, but that is a real thing that happens - as it focusses on Nicola. Following divorce, she has holed up in her ex's beach house - literally, she's locked herself in with food and plans to withstand a siege. With nothing to do - the power has been cut off - she explores the relationship and where it went wrong.

In Cassandra After, the narrator's girlfriend returns to her one night... from the grave. ('Mt mother had always told me it was better not to answer the door between midnight and three am') Peeling skin and with holes in her, she engages in polite conversation and we see in capsule a history of the relationship. The tone of the story is exquisitely calibrated, the narrator not so much shocked or scared as embarrassed.

salt slow, the titular story off the collection is a little different from most of the rest in that it takes place in a visibly strange, deranged world. The lather stories feature disturbances, fantasy elements, in a normal, rational world (and one of Armfield's accomplishments is to keep this sense of "normality" even as weird things go on) but in salt slow, the world itself has turned strange. We are in some kind of post-apocalyptic setting where the world is flooded and a man and woman survive in a boat, scavenging what they can from the water (iffy, because the saline appears to be dying) or fro other survivors. Again though there is that talent for preserving some kind of normality between thew two, which here seems to mean avoiding the big questions: What has happened? What do we do? As things get stranger and stranger though there must - we think - come a point when that can't be maintained...

Taken together this is a strong collection of stories. They have an eerie sense of being at the same time in the mundane world and also somewhere quite different - with the combination being totally compatible, totally to be expected, something to be lived with and through. 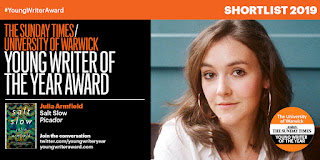