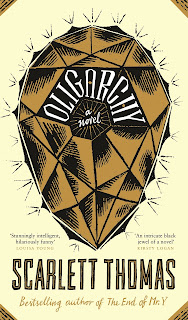 I was really pleased to be able to attend this book's launch on 4 November - see below the author reading from it and sharing anecdotes about touring schools to promote her children's books, which this is NOT one of - and I'm grateful to Canongate for a free advance e-copy of Oligarchy via Netgalley, to consider for review. (Quotes below come from that copy, and may not reflect the final text).

The thing - one of many things - I like about Scarlett Thomas's books is that they always give something unexpected. There is no "just" to them. They are all recognisably hers, but they are also all very different and they all confound one's assumptions.

As I started the book - with Russian oligarch's daughter Natalya ('but at home they call her Natasha') coming to a scuzzy English boarding school in the Midlands - I thought it might take a fantastic turn. The village boys howl like dogs outside the school gates at night. This is not a metaphor, but it's not pursued (which boys? why?)  There's also a distinctly gothic twist in the girls' mythology of the school, involving a drowning Princess, a Sultan and a diamond. The story hovers behind the action,  inspiring various events and being embroidered in various ways but as with those howling boys there is no "official" explanation.

Later, with deaths occurring, and an interesting sounding detective (DI Amaryllis Archer, in her jeans and high-heeled boots) appearing on the scene, I wondered about the mystery element - but while it's there and is, eventually, resolved (kind of) that's not central either at least not in detail.

Central, rather, are the lives of the girls and the caustic, pressured expectations on them in modern society. Tash, arriving from Russia, the recently discovered daughter of an oligarch who has plucked her from obscurity and stored her away for safekeeping, is our way into the group, whose members deform almost before our eyes under the weight of those expectations. There is Bianca ('She doesn't tell anyone about the sadness and the failure and the light inside her that is a bright white colour but is never bright or white enough'). Tiffanie, who plans her funeral 'which will have a botanical theme' and who is 'too lazy, too French and frankly too fucking cool to learn English pronunciation' and whose usage of 'Ange' for English 'ing' becomes a meme among the girls. There is Becky 'with the bad hair', the would-be Head Girl.

Thomas's eye for character here is so sharp, getting right inside (Tash's Aunt Sonya 'looks like money rather than sex or love') and it's the way her ensemble of memorable, real people - most of them young women - reacts to the stresses on them that makes this book come alive and forms the gothic heart of the novel (with the oft-quoted story of Princess Augusta the topping, perhaps). There's an atmosphere of confinement, or abandonment, to this group in their strange school and of a breakdown of their sense of identity as they try to be - something. All manner of fake science, folk wisdom and wishful thinking swill around concerning what one should and should not eat, what one should be and not be. The the urge to thinness becomes almost a contagion in itself, with its own heroes and victims.

There is no restraint, no voice of reason, and a palpable sense of the girls being alone - this seems to be a singularly ill-run school where there is no help, typified by an episode where a vomiting bug has broken out and they are simply left alone, in a dormitory, to wait it out - but also very much exposed to the ill winds of social media, to the expectations of teaches, gym trainers and shifty DJs in provincial basement nightclubs. The paradoxes of teenage life - of innocence and experience ('at fifteen you have to practice everything you plan to do') - are played out here as in countless other novels, but with I think a rare sharpness of observation and deftness of portrayal ('Suze likes drinking in a pub called the Marionette ("drinking in" not "going to")')

Behind all this there are Tash's memories of home, of her mother, her boyfriend. Behind it are her doubts about her place in England, her place in the world, above all, about her place in her father's orbit. Having 'found' her he is elusive. Aunt Sonya seems to have been given the job of looking after Tash. Possibly her father wants to marry her off to the son of a business associate (there's a strange episode where she's helicoptered out to a party in a remote castle, but like many scenes in this book Thomas gives only glimpses of this, returning to it, though, several times to draw out different aspects). The run-down, dangerous feeling school doesn't feel like a good place to be trying to resolve these issues, without support or guidance - but maybe the slightly fantastical, out of this world bubble universe, the intense relationship and teenage concerns are a good balance for those family concerns?

Oligarchy is a fascinating, provoking, book, a deeply human book and I think shows Thomas on top form. I strongly recommend it.