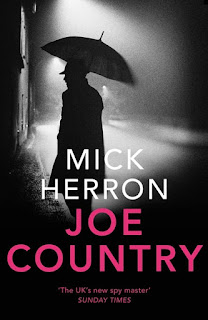 I'm grateful to the publisher for sending me a free advance copy of Joe Country.

I'm torn between introducing this book by describing the series and where it has got to, and launching off in the style of the book itself.

Something like "You know where Joe Country is. It's where you get to if you carry on down Spook Street, out beyond the lights and the pizza restaurants..."

Better not, -a poor pastiche of someone else's style is a sorry recommendation for a book, and the style is one of the delicious things about these books. But to get that urge out of my system,  I'll quote a, non-spoilery, bit, just to give a taster (obligatory disclaimer: this is from an advanced copy, final text may not match)

"It was cold on the street - not long now, and this weather would have its way with her bones. She'd creak on waking, slow to a crawl on frosty pavements. There were so many things age could do to you; so few you could do in return. In the end, she supposed, you just stayed on your feet as long as you were able, then took the rest lying down."

This is Catherine Standish, the closest that Jackson Lamb - the seedy, shady walking health emergency who presides over Slough House, where MI5's dimmest and worst are hidden away lest their failures reflect on the Service as a whole - has to a deputy. Catherine is a recovering alcoholic, who's taken to leaving her Tube train a stop early on her way home so she can buy a bottle from the wine warehouse. She manages the office, gets Lamb to sign things, and worries a lot. (Principally about the fact that Lamb killed her former boss).

And so it goes for all of Jackson's coterie - JK Coe, who's found he has killer instinct; Shirley Dander, who has "anger issues"; Louisa Guy - was it drugs with Louisa?; River, who engineered some mess-up at King's Cross Station; Roddy Ho (don't ask).

And new entrant Lech Wicinski, introduced last year in novella The Drop, who had some very nasty images on his laptop (his Service laptop, moreover). These are the stories of the left behinds, the no-more-hopers, told in Herron's thick, noir-tinged argot which at once distinguishes his books from other popular espionage series (at which he's not above poking a little fun, as with a reference to "the spy who walked round in the cold" or the strapline to this one "less MI5, more 9 to 5"). In this jargon, Slough House really comes to life, or perhaps to near death, a patched, flaking office building of doubtful future where the heating booms and creaks but gives little heat, the carpets are thin and the bloodstains poorly concealed. And, in Lamb's office, the smoking ban isn't so much flouted as continually trolled.

But there's much more to this series, and to Joe Country in particular, than an exercise in noir. The story here is very up to the moment ("...the Cold War didn't really end. It just hid behind closed doors, like Trump in a tantrum") taking in as it does the shady security  backwash of Brexit and also the shifty (I said SHIFTY) behaviour of apparently respectable public figures who Herron comes within a whisker of identifying (except, of course, for the fact that everyone in this book is fictional and any resemblance to real people a coincidence - the disclaimer say so quite clearly).

It's all tangled up with a call for help from an ex colleague's wife, to whom Louisa feels a debt of honour because she was, after all, sleeping with the colleague. Before his death. Responding to that call takes the team, one by one, off into the depths of Joe Country which is of course a cold and careless place where the rule is that any stranger is a hostile.

As always, Herron's writing is superb. That world-weary tone still conveys, I think, that these are colleagues who have strong feelings for each other. they may be strong feelings of resentment, yes, but who, in the end, have they got left - stripped of career, respect and, in many cases, of friends and family? At the start of the book, Lech makes a pilgrimage back to where his grandparents, Polish refugees who served this country in the War, lived. Little remains and he has become, it seems, almost an internal refugee himself, disgraced, fearful and alone. Will the Slough House team accept even him?

At the same time we see political machinations and the steps ruthless men will take to defend their own reputations. The issues in Joe Country are all very personal, about loyalty and trust and, perhaps, a little redemption. Which isn't to say that the stakes, and the dangers, aren't high.

An excellent thriller, culminating in near a hundred pages of knuckle-biting, sustained action, taking the team well outside their discomfort zone (you can't really call Slough House a "comfort zone", but perhaps there are worse things out there). And not all return to it.

It's a close-run thing, but I'd almost go so far as to say that this is my favourite of the Jackson Lamb novels. So, it's STRONGLY recommended.