Review - The House of Shattered Wings by Aliette de Bodard 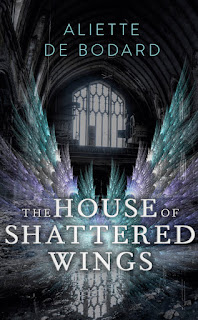 I bought my (paper) copy of this book from my local independent bookshop. I also listened to it via Audible.

The House of Shattered Wings - for first in de Board's Domain of the Fallen series - was only published four years ago, but is already, I think, one of those SFF books you really should have read, an instant classic.  And I hadn't.

So, to catch up, in advance of the third book being published later this year, I have been listening to Wings as an audiobook while driving to and from the station. That gives me 50 or so minutes a day, enough time for a decent length book over several weeks. I'm therefore specifically reviewing the audiobook, though I must admit, as I came towards the end, I picked up my paper copy and finished it that way, I couldn't wait for my next drive.

The first thing to say about House of Shattered Wings it that it's a triumph of worldbuilding. De Bodard creates a haunting, ruined Paris, gutted in a magical war some decades before, with a 1920s vibe, although I think that chronologically it's set more or less "now". The history of France - Europe - has had grafted into it the presence of "Fallen", literally angels cast out of Heaven in what's alluded to as a Miltonic rebellion. They arrive in Paris (and elsewhere? That's not clear) actually falling - the opening of the first chapter gives a snippet of the background to this - and liable not only to be damaged by that fall but immediately at the mercy of rival "Houses", and of gangs who will gut them for their magical "essence".

Angel magic is all in this Paris. It's both a curse - having ruined and polluted the City - and a source of power to the magicians of the Houses, which are presided over by those Fallen. And it's also a drug, sought after by addicts to whom it provides comfort, warmth, an illusion of safety. That's something needed in this dangerous world, needed for example by Madeleine, alchemist of House Silverspires, where she took refuge twenty years before after House Hawthorn was the scene of slaughter, an event that has traumatised and haunted her ever since. Madeleine is therefore an addict, hooked on the dangerous Essence, flouting the rules of her adopted House.

If the book was only notable for worldbuilding, that would be great, but not make for a satisfying read. But there is much more here. Another brilliant feature of this book is that while nobody here is very likeable, or at least few of the main characters, they are fascinating and complex as characters. While one may feel sympathy for Madeleine, she's not - or wasn't to me - a very pleasant person.  Selene, Head of Silverspires, is grouchy and frequently interrupts people from whom she might otherwise get useful information. Isabelle, a new Fallen who arrives early on, quickly becomes enigmatic and moody. Asmodeus - Head of House Hawthorn - is a vicious bully, only partially disguised by his being charming and mannered. Yet they all compel attention.

Possibly the only exception, in that he is more pleasant, but still complex,is Philippe, a (seemingly) young man from the Far East, trafficked to Paris by the colonial power to serve as cannon fodder in the War. I'll say more about Philippe in a moment, but first I just want to say how much I enjoyed this bunch of grumpy, spiky characters. Through them de Bodard weaves a compelling story without ever allowing it to turn into a mere struggle between Good and Evil. They are all fascinating, flawed creatures, plausible even while annoying (or perhaps because of it). Everyone here is capable of doing - has done - monstrous things. The system of Houses ensnares them all, and they are knowingly complicit in it, all except Philippe who, as an outsider especially sees its rottenness.

Even Philippe, though, perhaps mainly sees the effect on him personally and his country. In a neat encapsulation of colonialism, the Fallen's power has enabled France - presumably Europe at large - to overturn indigenous belief systems (by which I mean, actually existing systems of divinity and divine power) and in particular that of the Jade Emperor, who Philippe previously served. And none of the Fallen who we meet here recognise or rate Philippe's, rather different, grasp of magic because it's "foreign" or "primitive" compared to their own. The power of the Fallen is therefore both the cause of, and in the service of, a colonial attitude. They are strong, but also ignorant.

And in keeping with that, throughout this story Fallen mistrust each other, misjudge the situation, decline to share information, and leap to conclusions (often wrong) about what is going on. There is a threat in play here, a curse whose effects unfold, at first in minor ways then more and more strongly. And there is someone behind that threat. But, as I've said above, it's not a traditional evil, there isn't some Dark Lord here seeking power, there is no band of good magicians getting together to save the day. Motives are characterised by muddle, partial understanding, and personal prejudices.

All of that, perhaps surprisingly, makes for a brilliant story, gripping, convincing, often sad, sometimes wryly funny. One may not like these characters but it's hard not to sympathise with them, to wish that, somehow, they could break the wheel, could escape from the circles they have to keep going round - no less confined for believing they are in control.

So - a blisteringly good story, great fun to listen to though I will admit there were many moments when (as I was alone I the car) I was shouting out for Philippe or Madeleine to share some key bit of info, to be a bit less rigid, for Selene to shut up and listen instead of pontificating. You know they won't do it, and that's what gives the story such a tragic direction, but you wish they would.

Deservedly, then, one of those books you just HAVE to read. On to The House of Binding Thorns for my next listen!
Email ThisBlogThis!Share to TwitterShare to FacebookShare to Pinterest
Labels: 2015, Angels, Colonialism, Fantasy, magic, Paris, religion, War in Heaven