I'm grateful to Orbit for sending me a free ARC of this book and to Tracy Fenton for inviting me to take part in the blogtour.

"Dogs were with us from the very beginning... Of all the animals that travelled the long road through the ages with us, dogs always walked closest."

So opens A Boy and his Dog at the end of the World, a story of the very end of things, not the very beginning. Humanity has collapsed. A century earlier, babies stopped being born, save to a rare few. The population aged naturally and died off, and now only a few thousand people remain across the entire planet.

Griz is one of these. Growing up on Mingulay, off the coast of Scotland, Griz is part of a family of six (plus the dogs) who maintain some kind of way of life farming, fishing and prospecting ("viking") for useful things in abandoned houses across the islands. Later on in the book, we learn a little more about the origins of the family in the declining years of humanity and there are hints of wider history and attempts to deal with the crisis but I won't say anything about these - there is a stern warning at the beginning of the proof copy about spoilers, and it is absolutely right, not just a matter I think of giving away key plot details but of allowing the reader to approach the story in a certain way.

What I can say is that Griz is telling (writing) this story, looking back, to a sort-of imaginary friend (a boy in a photograph found in one of those houses). It explains how Griz set out into the wider world after a charismatic stranger came by, bamboozled the family, and stole Jess, one of Griz's beloved dogs. Griz pursues the stranger, Brand, into a world far away from everything familiar, a weird, dangerous and at times even beautiful world that has been left abandoned by humanity. The book meditates on the reasons for this pursuit: it's not just to redress a theft, there's loyalty to Jess, representing a wider loyalty, a sense of self - if one allows that to lapse, what's left? - but also - Griz is honest enough to admit - a desire to travel beyond the near islands, to experience the world.

And indeed Fletcher's depiction of this confusing, familiar yet strange world is entrancing, masterly, and evocative, giving a real sense of emptiness, of isolation. It's as though some places have been waiting for decades for a visitor. The imagined apocalypse wasn't sudden warfare, disease or alien invasion but a gradual, even orderly, falling off. There was plenty of time to tidy things up, and some people (the "neatists") even dedicated themselves to that. Without violence and with so few remaining humans, things are largely intact, apart from what nature has achieved in one hundred or so years of growth and attrition. Fletcher's shows us ourselves through a stranger's eyes. That sometimes brings out beauty that we would miss, for example the curved support arch of a concrete motorway footbridge floating high across a cutting. It is also though very dark at times - this is often not a happy story, and the departed humans did many bad things.

Griz comprehends "our" past world to a large degree, having read a lot of books. But not exactly, and this story is filled with questions and speculation addressed to that anonymous boy, questions about what it was like to be among crowds or what certain things were for. There are also some enormous gaps, Griz not knowing one commonplace fact about travel in the UK which I won't state because, again, spoilers, as well as hilarious misconceptions (for example, that a statue of a footballer labelled "Best" is simply of the best player) because Griz has book knowledge of our world, but not experience. And that book knowledge is all of what happened before the crisis. There are no records, only family rumours, of the more recent past so crucial knowledge is missing about current dangers that will have to be faced. Fletcher is good at implying some of these, in an almost eerie way, without making them too visible.

Griz is though much better equipped for survival in the future world, with skills such as being able to sail a boat alone, catch and prepare food, treat injuries with a plant-based medical kit, find clean water, navigate and when required fight using bow and arrow. Griz can also show caution (apart from dashing off to rescue Jess) "Things die and things rot. And you don't always have to go poking at them". Remember, this is a story of someone brought up post-catastrophe, not of someone from our generation undergoing that catastrophe - and of someone who's seen accidents and the fragility of life. The practical details are well thought out, as well as the potential dangers and crises that can arise at a moment's notice and the consequences of what would be to us a minor scrape or accident. (Many of these dangers are prefigured with Griz hinting at catastrophes to come - I found this slightly jarring to begin with, but be patient, there is a reason for this: I can't say what it is, but it does all make sense within the narrative).

This being a depopulated world, there isn't scope for a huge number of characters but there are others here besides Griz. His great enemy, Brand, is much more than a thief in the night - we learn more about him and he is a complex, contradictory and troubling person. And there are others I won't mention. Griz's remaining dog, Jip, makes up for any lack of humans - the relationship between the two is wonderful. Jip being a bold dog, a terrier, who never knows when to back off, his safety is a fear throughout not only for the reader but for Griz too, who will be left completely alone if anything were to happen to Jip.

Overall, I simply loved this book. It's definitely one of my candidates for best this year, and I think does something very different, very unsettling and in the end very truthful with the post-apocalyptic genre. (Not least because in a rather meta way Griz is aware of such books, having read many of them, and isn't above pointing out where they got things wrong).

I have seen comparisons with Station Eleven (which I also loved) and I think these have elements of truth - especially the part of that book set long after - but A Boy and his Dog seems to me much more intimate, as well as being both less hopeful about our future - so few humans left - and (perhaps) more hopeful about the future, with its depiction of the processes, almost happening before our eyes, that will erase the damage we have done to the world and leave it waiting for... who knows what?

A great read, STRONGLY recommended, albeit do keep some tissues to hand. My only real criticism would be that I really wanted more of Griz and more of Griz's world...


The blogtour for A Boy and his Dog continues with stops at many outstanding blogs - see the poster below for more details. If you want to find out more, the publisher's page is here. You can buy the book from your local bookshop (including online via Hive) from Blackwell's, Waterstones or Amazon or from lots of other places. 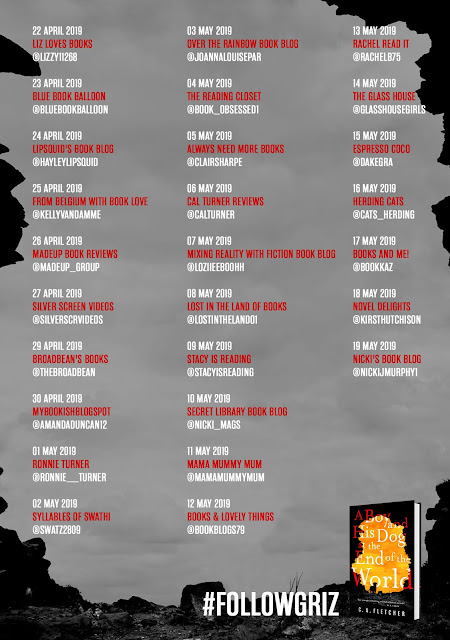