Review - A Book of Bones by John Connelly 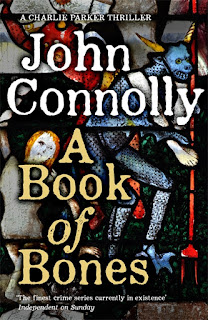 I'm grateful to the publisher for sending me a free advance copy of A Book of Bones for review.

As if to prove this series is a long way from losing steam, with the 17th Charlie Parker thriller - and marking 20 years as an author - In A Book of Bones John Connolly gives us a double length (700 pages!) adventure for Charlie, Angel, Louis and many of his wider cast. Not only that, but in this book themes from several recent novels come together. And it also contains what's basically an entire police procedural featuring two new (but believable, likeable) characters.

Finally, in an Afterword, Connolly reveals the background to the publication of his first book, Every Dead Thing, in 1997.

So A Book of Bones is a great gift to the readers - a bumper helping of Charlie Parker, but also an ambitious novel at a point where the temptation must be to rest on the oars and let the momentum carry things forward. That's maybe something of a risk.

Who, we might ask, are this pair of detectives, Gackowska and Hynes, investigating the murder of young teacher Romana Moon on a lonely moor in Northumberland, half a world away from Parker's usual hunting grounds in the USA?

Who are the other voices we hear?

How does everything join up?

If it is a risk, it's amply justified as Connolly delivers a complex and interesting novel that engages from the very start when we see Parker, called in to advise on a killing in a New Mexico junkyard, presented almost as our guide to the inferno that seems be looming, the junkyard "descending in a series of declivities to a massive pit at its heart, where Parker glimpsed a fire burning." If you're a longtime reader of this series you will I think regard Parker - even an older Parker, a damaged Parker - as a sure guide through this territory. And so it proves. In a world polluted, tainted, walking among moral hazards, temptations and threats, Charlie Parker, who has endured much, can still be relied upon.

We know from the ending of The Woman in the Woods that Parker is hunting down sinister lawyer Quayle and his murderous henchwoman Pallid Mors. The pair are formidable adversaries, so things seem set for a confrontation, a battle royal. But the book is actually more subtle than that. There is a great deal here, and it would be silly to list all or, or even most, of the threads - and probably spoilery to try, since, however circumspect one thinks one is being, the combination would give too much away. I will say that A Book of Bones skilfully explores different sorts of evil, and the relationship between them - not just flashy, supernatural evil but the mundane sort. Some of its most effective writing in this book (and it is also the most grim reading) portrays the actions and motivations of the evildoers in this book and, often, the sheet casualness of it all ("Oh, and he'd started killing women: there was that as well.")

Unpicking it all, Parker seems to be peeling back layer after later of corruption (of pollution, as someone observes at one point) moral, legal, and financial; historical and modern, and revealing the strands that connect present day misogyny and male entitlement ("That was the way women were... They were conniving, always looking for the advantage. You had to teach them their place...") to both modern centres of power and influence (whether in London, or Boston,where the Colonial Club looms again) and the warped - polluted - cults of the past.

The hunt ranges geographically, taking in many parts of England, where women's bodies are being dumped at ancient sacred sites (it was a shock that one was just up the road from me: I see Wittenham Clumps daily on the skyline as I walk my dogs) and the Netherlands, where Angel has bloody history. It also plays games with time, giving us documents, histories and accounts from over the past few centuries, all part of the fractured narrative that will climax in the modern(?) London of Quayle.

This is, as I've said, grim at times, but thankfully Connolly doesn't just give us 700 pages of darkness. There is hope here too - flawed but ultimately brave people standing against the darkness, for example that police duo again delving into grim realities, unaware of any supernatural connection  (though we are, as various pieces of weirdness are exposed) but simply trying to bring some order and justice to the world. They offset Parker's much less orthodox enquiries, supported by his ragtag crew and even his iffy connection with FBI Agent Ross. (What's going on with Ross? I can't quite put my finger on it...)

It's a complex, doubled, story. Parker, we know, is hunting Quayle and Quayle knows this. But Quayle has other irons in the fire as well. Exactly what he's up to - and thus, how one might stop him - only emerges slowly, because, for the longer part of this book, Parker hasn't joined up what is going on. We, the readers, know much more than Parker about what Quayle's planning, about his tools, his history.

Through all that - from Miss Moon's agony at the start of the book to an... unravelling... at the end - there is a repeated focus on other possibilities, other outcomes, other potential worlds, foreseen by characters for themselves or others ("He could see her sadness, and a future where he was no longer in her life...") or moments when things change forever, closing down choices and alternatives ("'I'm coming' says Soter. And is damned.'")

Choices matter, from a countryman who stokes up his fire against the prowling spirit of wood and leaf worshiped by Parker's old adversaries the Familists: "Because all wood fears the flame" to an ex soldier who falls in with what he knows is the wrong company. But can they be reworked, undone, on a larger scale? Quayle certainly thinks so, which is why he is chasing down a certain ancient Atlas which has the power to make and remake the world according to those alternatives. Quayle and his associate Pallid Mors have killed for this before and will do so again, in their different styles. Quayle, a figure who seems to haunt the centuries - "After a time, it became difficult to distinguish between memory and dreaming" - is a most clear eyed but almost regretful killer, Mors an enthusiast who seems to enjoy causing pain.

All of this builds on the world that Connolly has built, the characters he has developed, across his whole series. That's a lot of background, though you don't need to have read them all to appreciate this book, but this book is about more than background, it has its own focus, its own themes, its own darkness, and if that is a risk then - by not taking the safe option - A Book of Bones succeeds triumphantly. It carries Parker's story forward to new places (literally) and shows that this series has a great deal of life in it yet (as well as deaths, of course. I lost count of the deaths).

An absorbing book, a book whose pages one can simply get lost in - and one I'd strongly recommend.