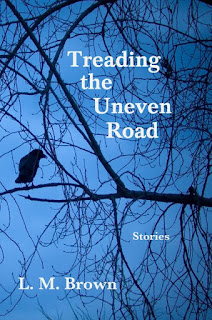 I'm grateful to the author for a free advance e-copy of this book for review.

The stories in this linked collection are set in a small village in the Northwest of Ireland in the early 1980’s and 90’s. The residents feel forgotten by the world, as a by-pass around the village has rid them of their once busy traffic. The collection is not only about the characters' need for salvation but it is about a society that is unraveling: the world inside and outside the village is changing.

Pamela Painter, author of Getting To Know The Weather, and The Long and Short of it, writes: Set in Ireland, the wonderful stories in TREADING THE UNEVEN ROAD are connected with bands of steel and heart. Their unforgettable characters weave in and out of each other’s lives, acting on impulses that are sometimes misguided, occasionally dangerous but often beautiful. A great read.

LM Brown is the author of the novel Debris, released last April. She has a master's in creative writing and her stories have appeared in numerous literary magazines. She grew up in Sligo, Ireland, but now resides in Massachusetts with her husband, three daughters, a dog and a bearded dragon.

I really enjoyed this linked collection of stories. The (unnamed) village, on the road from Dublin to Sligo ("at one time the road would have been busy with traffic... but that was before the bypass brought quietness to the area and a lull to the shops"), is conjured vividly with its focal points, Faith's bakery, the Dun Maeve pub, the statue of Our Lady in its niche opposite the bridge and its employers - the quarry, Lavin's Construction. At one point a "Station Road" is mentioned, but there's no indication of any trains, and it's a three hour drive or bus ride to get anywhere.  The village does not sound an easy place to live - we hear of industrial accidents, of the urge to get out to Dublin, to London or further afield (getting away, together with the ways it can go wrong, is a recurrent theme) and of the pressure of living one's life under the gaze of family, friends and strangers.

Within this setting, Brown deploys well-observed and recurring characters whose stories we see from separate perspectives and at different times (not necessarily, as someone once said, in the right order) - a device which makes themes and events increasingly familiar. In some respects it's like a serial drama, with familiar faces welcomed back to tell about their lives )and storytelling is very much part of it with stories within the stories too).

The first story, "The Lady on the Bridge", focusses on Bernadette, a woman who suspects her husband Marcus of adultery. As she goes about her day she imagines what may be happening ("the names she gave the woman she thought her husband was seeing depended on her mood") and finds that the only person she can speak to is his drinking friend, Mike. She begins to make illicit telephone calls to him on Saturday mornings and the story gradually sketches the origin, perhaps, of Bernadette's general sense of worry (at the start of the story she's concerned the river may flood) and dis-ease in her fear that "I might end up like my mother" and in a buried longing to escape the small town.

"The Sacred Heart" is about two brothers, Dick and Enda, and is also framed by the desire to get away, something Dick tries at the age of three - an event which seems to set the shape of his life and his relationship with his bother, who foils that attempt. An intense study of the two boys and their mother (the father fades from the scene) it's a poignant tale of ambitions thwarted, things said and unsaid (yet understood: perhaps that's worse) which reminded me of a Thomas Hardy story.

In "The Taste of Salt" a young man sits over the body of his childhood friend. The closeness between Lou and Sam, the intensely observed behaviour of friends, relatives and strangers, above all, perhaps, what's not said ("For most things he did, there was an element of shame, though he would not have understood it as such") the felt, but pent in, grief, all make this a confined, claustrophobic story.

In "The Shape of Longing" we really see how Brown is weaving a bigger picture. It's the story of (or maybe, a story of) Bernadette's (from "The Lady on the Bridge") mother, Ann Lavin. Of how she left her husband and daughter - but that's the conclusion, not the story itself, which concerns her brother Ryan and also touches on the events described in "The Sacred Heart". Set much earlier than "The Lady on the Bridge" and reaching back to describe events earlier still, I think here Brown is showing consequences and causes, or at least correlations, reaching backwards and forwards, uniting this small town but also creating divisions - even if  just in the minds of her characters, as in the way that Ann cuts herself off from her family.

Ann Lavin is clearly not a comfortable person, not with herself, not with her family. ("If I'd made my mother look at me, I might have wanted more.") While she tells us a bit about her earlier life it isn't an explanation of her, any more than she can explain herself. This is a closely imagined, impressionistic view of a woman in a small community, in a web of friends, neighbours, all of them, she imagines, judging her. I wasn't sure, after reading this story if I understood Ann, or for that matter, Bernadette, and better - but perhaps I understood Ann-and-Bernadette.

"The Wrong Man" is a story of two young women, Este and Moire and perhaps parallels and contrasts with the two boys in "The Taste of Salt". Coming from different social strata, they become firm friends and after leaving school, head to London. However, all does not go well, although exactly why is complex - I wasn't sure if it was, in the end, something that happened in London, something whose seeds were planted long before, or indeed if it was to with Este and Moire at all. This is a beautifully observed story of assumptions, of trying to cling on to things that are gone, of lives spooling by like reels of film, as Brown follows what happened, what went wrong, for decades, before, tentatively, hinting at the possibility of a second chance.

"Blackbirds" picks up the story of bereaved, guilty Lou from "The Taste of Salt" as he confronts a hated figure from his past and finds that revenge isn't as simple - or as satisfying - as he thought. "The Man on Sea Road" takes the same story further, introducing another character, also bereaved, with a different involvement in the situation.

"White Trout" rounds off the collection by telling us more about Dick and Enda, and also about Faith, the owner of the cafe, who plays a key role in several of the stories giving a little hope, bringing people together, acting as a memory and a conscience. her now life hasn't been easy and her business is now suffering from loss of trade due to the by-pass but she's a redoubtable figure who clearly makes a difference in the community.

You have to take the stories together, as there are themes that only emerge once you have read several and I needed to go back and reread some of them to pick up the references and the contrasts. Rooted in the 80s and 90s perhaps, the stories thread forward and back across many decades - the earlier parts of "The Wrong Man" had a very 60s or 70s feeling to me - to give a vivid picture of a community constantly changing while retaining some central character.

While many of the stories are sad this is a strong collection which I'd wholeheartedly recommend.

You can buy the book from Amazon (UK here, US here).