Review - The Dollmaker by Nina Allan 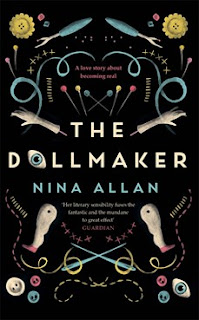 I really enjoyed Allan's last two books, The Rift and The Race, and I was eager to read The Dollmaker. Those books were twisty, substantial ostensible science fiction/ fantasy which invited the reader to wonder if what were - on the surface - fantastical stories should simply be taken as such, or whether the weird turns, contradictions and coincidences were (or also were) indicative of ruptured relationships and individuals' breakdowns. The answer wasn't clear, and that, perhaps, was one of the most satisfying things about them.

The Dollmaker presents, I think, the same choice, but from the other side of the genre fence. This is ostensibly a naturalistic, if increasingly odd, story which also acts as a framing narrative to a series of fantastical short stories (described as modern fairy tales) allegedly written by 'Ewa Chaplin' and translated from the Polish. However, the subjects and provenance of those stories seem to be coupled with the themes of the 'real world' story, something Allan's protagonist Andrew Garvie uneasily begins to realise.

Are we dealing with confirmation bias - the characters in The Dollmaker reporting on one book among many they've read that seems to reflect their own lives?

Or is there more?

To explain further, in this book we meet Andrew Garvie, the dollmaker of the title.

We meet him first as a small boy, later a small man. While we're introduced early to this interest in dolls (he is aged eight) and we might expect that to cause him trouble with a traditionalist father and cruel schoolmates, the fact of Andrew's stature and condition is in contrast something that only emerges slowly - indeed part of the unrolling impact of this book is his seeing himself reflected (and traduced, and distorted) in Chaplin's stories. The world 'dwarf' is often used in these, and this is only one of the ways in which the stories, many of them about people marked out - a girl with autism, a soldier who lost his legs in the Great War and, yes, people like Andrew - echo the 'real life' of The Dollmaker.

Garvie has, we learn, answered a personal ad in a dollmaking magazine:

INFORMATION WANTED ON THE LIFE AND WORK OF DOLLMAKER EWA CHAPLIN AND/ OR FRIENDSHIP, CORRESPONDENCE. PLEASE REPLY TO: BRAMBER WINTERS.

He is on his (leisurely) way across southern England to meet Winters at her home in Cornwall. The Dollmaker interleaves Garvie's travels and observations with Chaplin's fantastical stories (a young actress with a wealthy and older husband begins a relationship with a disabled ex soldier; a teacher struggles with her feelings when a gill with autism arrive sin her class; in a near future Britain, a theocracy has banned representations of humans and an artist is publicly tried for blasphemy; a country exists where Fae are as real a menace as rats, and treated in a similar way) and with Winters' letters to him. From them (and it's not clear whether he has received them all, or whether some were sent as he travelled) we learn about her early life. She has been twenty years in a hospital after some incident which (at first) she only uneasily alludes to.

It's clear that Garvie has become - what? Infatuated? Obsessed? - by Winters (again reflecting Chapman's stories). He sees himself as setting out to rescue her in some way, even though it's not clear she wants or needs to be rescued. There seems to be more going on here than a shared love of dolls and Allan teases a bit, drawing out the journey and making it a bit of an epic. Garvie presents as a somewhat old-fashioned character, regretting the turmoil of modern Reading (the English town, not the activity) or the state of architecture in post-war Exeter. Something about the reflections on these places, as well as his visits to lesser known towns off the tourist map and the leisurely nature of his journey (he takes days to do a trip you could surely manage by train in a day?) put me in mind of Kazuo Ishiguro's The Remains of the Day.

Garvie seems to be an unreliable narrator. He certainly is in terms of what he tells Bramber, for example not letting on that he's coming to find her but I sensed that a lot of what he tells us is mysterious or incomplete. What about Ursula's sudden disappearance? Or the twins he mentions several times but never explains? So by the point where - in the last quarter of the book - a single telephone call seems to cast doubt on other aspects of the story too, it almost begins to look as if Chaplin's fairy tales are more solid, more certain than real life itself (despite their themes of alternative universes and the way they trespass on reality). Perhaps this is similar to the way that Garvie sees his (assumed) relationship with Winters as totally real - while being quiet cold and unsympathetic to the very real troubles of his friend Clarence's autistic daughter, Jane.

It's a dense novel (in a good way!) which had me flicking backwards and forwards in my Kindle checking for repetitions, echoes, foreshadowings, for loose strands suddenly appearing in a different context and resolutions to things that seemed to stop midway. I think that in a sense the story here is like one of those 2D or 3D representations of a 4D object, the compression producing odd effects and conjunctions which have their own patterns and rhythms.

An excellent book, one I enjoyed a lot and would strongly recommend.