Review - We Sold Our Souls by Grady Hendrix 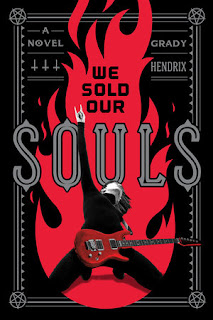 I'm grateful to the publisher for an advance copy of We Sold Our Souls.

"A girl with a guitar never has to apologise for anything."

Dürt Würk was a heavy metal band formed by Kris and Terry back in the day. They did pretty well, and were about to do VERY well and then things went wrong.

Wrong leaving one member in a wheelchair.

Wrong leaving Kris working nightshifts at a Best Western motel, her guitar mouldering in the basement.

Wrong leaving Terry a superstar career as The Blind King.

Now there's some unfinished business to take care of. Kris needs to find Terry and perform one last set...

I had great fun with this book and in fact found it surprisingly moving. I am not now, and ever have been, a devotee of metal yet I found Hendrix's narrative - his grand metaphor, perhaps - of musical success as selling one's soul, and of redemption offered through the creativity and energy of that musical genre, really worked.

It's partly the characterisation. This is Kris's book. Kris has been numb since those events of Contract Night, estranged from the rest of the band, forbidden to play, poor, pitied (or despised) by everyone, including her brother (the town policeman, he won't even help her out when a sleazy guest urinates all over the check-in desk). You know something is going to snap, and it's a relief when it does, but the way Hendrix captures the reality of a woman boxed in by men really convinces.

"And he gave her one of his patronising smiles. The same one when he explained the contract with Black Iron Mountain in the Witch House that night...The same smile men had been giving Kris her entire life."

But the concept, the verve with which Hendrix fills it in, is also compelling. There is a void in all of us, and that's where Black Iron Mountain is. A kind of hybrid, or metaphor, Black Iron Mountain is either infernal, supernatural evil finding an outlet through denatured, commercial music or it is the act of selling out, of watering down and cashing in, of reducing everything to money. Hendrix returns to the theme again and again and in the end I didn't know whether we were supposed to think there are actual diabolical, vampiric entities behind the Blind King's front or whether that's just Kris's impression - Kris, high on who knows what, desperate, dosed up with prescription meds in a sinister, cultish facility to which at one stage she's committed.

I don't think, in the end, it matters. Because the important part about Kris's odyssey isn't what she is fighting against but how, penniless, destitute, and hunted, she discovers the strength to keep fighting

"The girl handed Kris her guitar and pulled the pit bull onto her lap. Kris balanced the guitar on her right thigh and started to play... Finally her strumming started to coalesce into music, and what came out of that cheap, chipped piece-of-shit guitar was the blues.

That didn't surprise Kris. Relax any metal song enough and you went right back into the blues... Every sing was the same song. These were songs for people who were scared to open their mailboxes, whose phone calls never brought good news... People waiting for a check that never came, waiting for a court date... waiting for a break, crushed beneath the wheel".

The wheel, to which millions are chained in the eternal darkness of Black Iron Mountain, features strongly in Dürt Würk's masterpiece, Troglodyte, which never appeared but which points the way to liberation or at least, to continuing the fight ("Just Fight. Don't ever stop.")

I don't, as I said, have the background to understand Hendrix's analysis of the music or the lovingly realised descriptions of it, but that doesn't matter, because he goes way beyond mere scene setting, he injects this book and Kris in particular with real heart, the heart of a heartless world, and the soul of soulless conditions - because what else is there when our souls are sold? - so that the lyrics from Troglodyte sour, even on the page with no accompaniment.

The book doesn't bring cheap comfort. Times are hard, as Kris discovers while crossing America amount the destitute and the left-behind. People are mean too, as she also finds. Black Iron Mountain is strong, yet it can be overcome, if the will is there.

If that makes the book sound preachy, it's not. While it is in many ways a serious book, and grim at times - there is quite a death toll - it is also funny (especially in the extracts Hendrix uses to open the chapters, taken form various media and commenting around the events of the story, ranging from talk radio rants to breakfast shows to clips from ancient music magazines).

Above all it's readable, taking a perhaps obvious idea but really making it live. I'd really, really encourage you to read this book. It's fun, it has heart, it's true.