Review - In a House of Lies by Ian Rankin 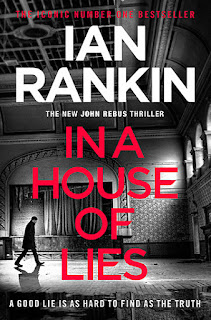 I'm grateful to the publishers for an advance copy of this book via NetGalley.

In a House of Lies is, of course, the latest book about John Rebus, sometime DI with Lothian and Borders Police. That will be enough for most people to just decide to read - it would (was) be enough for me. But as this series evolves, Rankin continues to develop his characters  and to address new challenges and there is a fair bit here to analyse, so please indulge me.

Rebus is now retired and in declining health. Ill with COPD (the two flights of stairs to his flat becoming "a definite issue"), he has given up smoking - couldn't get too grips with vaping, too tech - and is largely off the booze (the Oxford Bar hardly features, and we even witness Rebus visiting a pub... for a coffee).

Lothian and Borders Police has gone, too, swallowed up into Police Scotland, a unitary force run from the glossy "crime campus" at Gartcosh, miles from Edinburgh. Instead of local detectives investigating murders, a mobile squad - MIT ("Major Incident Team") is parachuted in as required with experienced cops like Siobhan Clarke squeezed out. It's not hard to see Rankin's frustration with this situation ("This was the way things were now, thanks to the changes at Police Scotland - local CID reduced to a secondary role..." "Police Scotland's process of centralisation meant a lot of local information-gathering either didn't happen or went ignored") especially since in recent books he's had to devote a lot of ingenuity not only to making Rebus's presence, but even that of Clarke, the other real regular from the old days, plausible, even before getting the story itself moving.

In a House of Lies achieves the former by making one of Rebus's old cases relevant again when a missing person is found long dead. Rebus can therefore be brought in to elucidate the botched enquiry from 2006 and as a bonus, Malcolm Fox gets to give the original case papers a once-over. Clarke is attached to the enquiry for her local knowledge. In terms of plausibility I think this is one of the better set-ups of recent books (Rebus doesn't have to keep trying to blag his way into the enquiry room) even if it does mean repeating what feels like a bit of a running theme: Rebus in the sights of Complaints for past failings and potentially taking the rap for the corrupt and lazy - even though (as we know well) he may always have been unconventional, but was never corrupt or lazy.

It's perhaps in keeping with this somewhat backward-looking and even elegiac mood that a recurring theme here is memory and its trickiness. Clarke stores names on her phone, in case she forgets them. Rebus accuses her and her generation of having short memories, and having "forgotten how to store information". He wonders about the point of "dusting off people's memories" from the earlier enquiry, and how soon they will forget the body found in the woods. Amidst all this loss of memory, despite the vague promise that soon it will all be "kept in the Cloud, whatever that is", it's not surprisingly Rebus - and his old nemesis Cafferty - who know what's what even if "it was hard [for Rebus] to remember the person he'd been, new to the city and new to the job" (a bit of a sly joke there, perhaps, given the way that Rankin has reinvented and reinterpreted Rebus over the course of this series).

But this series is far from becoming a showcase for grumpy old men (whether characters or author). There is a considerable freshness to In a House of Lies whether it's the greater sense of equality between Clarke, Rebus and Fox (in previous books, there has been a hierarchy which has dotted about a bit with one or the other of the three on top at different times depending who is investigating who, whether Rebus is in or out of the police and where Clarke is in her career), Rebus (finally!) taking more care of his health or - oddly - Cafferty, who clearly has Plans (and is considerably more adroit with the tech than Rebus, as Rankin makes clear when describing his infosec measures)

The story itself is pacy, twisty and substantial. Apart from the body that comes to light, Clarke is being threatened, giving her an early excuse to bring in Rebus with a relatively self-contained task. I thought for a while that was going to be Rebus's main role in the story, with the focus on her. That might not be before time (personally I'd love a series of Siobhan Clarke novels with Rebus backgrounded) but perhaps Rankin knows his audience too well for this. At any rate, Rebus gets plenty to do here, and on the main case, though perhaps he doesn't quite own the stage as in the past.

I only had a couple of reservations. First, in a couple of places the portrayal of secondary women characters seemed a bit perfunctory, with a main feature being how much make-up they wore - either too much, or little or none because "she really didn't need it" (of course, it may be she just didn't bother with it, or was in a bit of a hurry that morning...)

And there's reference to Cafferty's investment in a low budget British film in the mid 2000s having produced a profit. No way was there a profit - that investment would have been for tax purposes, designed to produce a loss. However, perhaps that's not a lapse by Rankin and Cafferty knew this all along - or the producer would have received an unwelcome surprise of some sort - and is spinning a line for Rebus.

OK, maybe I'm being a bit picky here. Overall, for me, this is one of the best, if not the best, Rebus story since Rankin brought the character back after Exit Music. It has a complex, satisfying story, plenty of atmosphere and lots for my favourite three detectives to do, with, apparently, plenty of life still in the series.