Review - Places in the Darkness by Chris Brookmyre 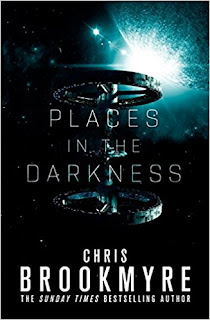 Chris Brookmyre is well known for his successful series of crime novels featuring journalist Jack Parlabane and for his Jasmine Sharp trilogy. Among these, he has also published SF (Pandemonium and Bedlam) and I was interested to see how Pandemonium in particular seems to have divided the fanbase. Look at the Amazon reviews - some baffled crime fans there wanting to know why their favourite author is suddenly writing SF.

Places may have a similar effect, because it's heavily SF influenced (A space station! In space! Mysterious advanced technologies! World governments!)

...but it may not, because it's also a murder mystery.

The hero, Nikki Freeman (aka Nikki Fixx, who can make any problem go away, for the right consideration) is a detective on futuristic Ciudad de Cielo (as Spanish is the majority language in the US, much of the nomenclature on Seedee is Spanish influenced). Nikki is a player, cynical, connected and in the sights of morality campaigners like Helen Pititjean. So having to team up with the straitlaced Alice Blake to investigate the gruesome murder of gangster Omega (the first murder ever on CdC) is not her idea of a good career move.

So far, perhaps, so stereotyped. Nikki is the partner with the street (or rather Seedee) knowledge), Alice the senior, by-the-book cop. We know it'll be Nikki's role to bring the realities home to Alice, show here how things really work. And, yes, there is a big gap on Seedee between the public version - what the four corporations of the Quadriga, who run the place, want everyone to believe - and the reality which is rather, er, seedy. Drinking dens, sex clubs and fighting holes are the least of it.

And Alice will show Nikki that rules are there for a purpose.

So, a run-of-the-mill setup, despite the location and futuristic background?

I don't think Brookmyre could do run-of-the-mill if his writing hand depended on it. There is so much more here.

First, the relationship between the two women is a novel in itself. Of course there is stuff in both their backgrounds which slowly emerges - and mysteries about their present (why do both keep forgetting stuff?) but that aside they're both, from the start, seriously competent (in different ways) and on top of their jobs. Brookmyre sketches enough of the political background to show how much depends on their success, and how they are invested in their different viewpoints (Alice starts with an almost puritanical zeal: Nikki has a fire of righteous fury in her about the treatment of CdC's more disposable citizens) but he does this subtly and allows us to see the multiple levels of the relationship.

Secondly, there is just enough unreliability in what we're shown that almost until the end of the book, multiple perspectives are plausible. (A quantum novel?) I liked Alice, but suspected there was more to her than she - or Brookmyre - was letting on. I liked Nikki, but I didn't trust her. A lot of the book focuses on memory technologies, ways to assist and manipulate the brain, and I felt Brookmyre was up to a fair amount of that himself. Yet when all(?) does become clear, he had, I think, played fair with the reader. The risk, and temptation, of SF-detective fiction, is that a previously unmentioned technology was responsible for everything. That would be cheating, just as it would in a classic detective story if it turns out to have been a twin who did it all. Brookmyre knows his rules, I think.

Finally, the location is gloriously realised and imagined. From the two Wheels spinning round the Core to the space elevator itself, this is a very plausible city in the sky, large enough to require its own Metro and broken enough to have its own underclass and its own dodgy neighbourhoods (and posh suburbs). There's more than a dash of the noir here though, obviously, no rainstorms. I only found one aspect a little hard to swallow - I don't think rotating cylinders create artificial gravity in the way Brookmyre describes. But that's still a good deal less absurd than the typical Star Trek episode, so let's not quibble.

But beyond that - this book simply has heart. In their different ways, Alice, Nikki and CdC - and its people, especially the forgotten ones - aren't being what they could be they need (different types of) healing. And that isn't going to happen while the four corporations, the Federation of National Governments, who oversee the who thing, tussle over control.

That's even before we factor in the others who have a role here, out in the darkness, who have their own plans - which Nikki and Alice may be part of, whether they want to or not.

Cracking the case will take the two women to the heart of this deeper mystery, to confront a threat they could never imagine.

This is a lovely book, pacy, intelligent, fun, and, as I said, with a big heart. If you read SF, you'll love this. If you don't, you should still love it.