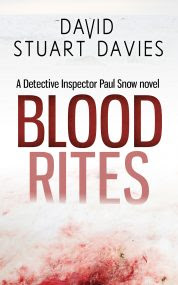 Today we join the blogtour for Blood Rites by David Stuart Davies, the third book featuring DI Paul Snow. You can see all the dates on the tour below.

I'm grateful for an advance copy of this book as part of the blogtour.

This is a short book and a spare one. Despite covering five grotesque murders and going deep into the character of investigating police officer DI Paul Snow, Blood Rites doesn't have the level of detail - or the baggage - of a typical police procedural, or the accumulation of clues, red herrings and deductions of a mystery. (Indeed, I guessed who the murderer was going to be pretty early on - this is not, I think, a "whodunnit?")

Rather, Davies uses the story of the murders to counterpoint the isolation of his protagonist, Snow (the name itself suggesting coldness, and indeed the book does have a socially bleak atmosphere, concluding in suitably wintry weather). Paul Snow is a gay man, a gay police officer, in 1980s Huddersfield. It's not a forgiving time, with Clause 28 and the moral panic in the background - despite being only 30 years ago, it is a bit of a shock to be reminded how things were.

Accordingly, Snow has ruthlessly suppressed his sexuality in order to survive in the Force and in the town. Indeed, Davies flags this a couple of times by having Snow refer to his 'proclivity', rather than his sexuality or orientation - a cold, distancing term if ever I saw one, but accurate in that he's been rigidly celibate for years.

Snow's denial of his nature means he is truly alone. He is not in touch with anyone else who is like him or who might understand. He's begun to cultivate a relationship with a woman - though whether primarily as a smokescreen (he has a boss who 'likes my officers to be married') or as a way to overcome the loneliness, isn't really clear. But even this paradoxically isolates him, as she wants it to develop in ways which, he begins to understand, aren't what he really wants.

Ironically, the story is then a study in how Snow becomes more lonely, more isolated, both personally and professionally, as he attempts to solve a baffling series of murders which seem to have nothing in common bar the weapon used.

As if that wasn't bleak enough, in setting up the crimes, Davies shows us a whole slew of truly desperate people, living far from hope; the girl raped by her father, the despairing single mother, the wife abused by her husband, the young woman so desperate for a few pounds that she'll go home to a seedy flat with an ex-con who picked her up in a bar...

A lot to pack in to what is, as I said, a fairly short book, and it leaves no space for detective theatrics or elaborate theories. Rather, the focus is on Snow's gradual unravelling and on the motivations of the murderer. Of these, I felt that Snow was the more interesting and - not surprisingly - sympathetic.

This was a very different sort of detective fiction from what I'd have expected, more of a book about isolation and corruption than it is a crime or mystery novel. It is truly, exceptionally, dark and atmospheric. 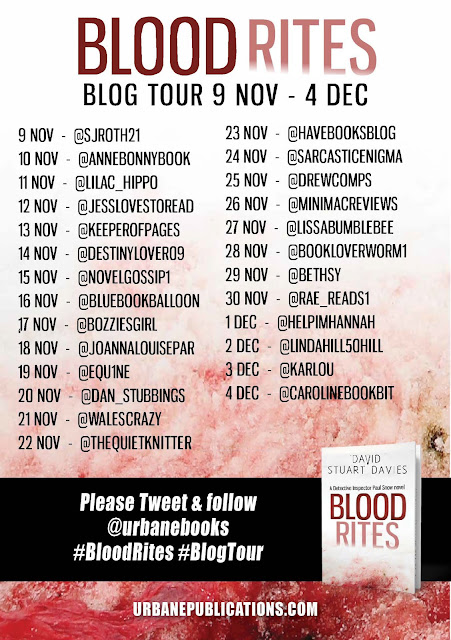 For more information about the book or David, you can visit his website at


Buy the book at Hive here, at Waterstones here or from Amazon here.