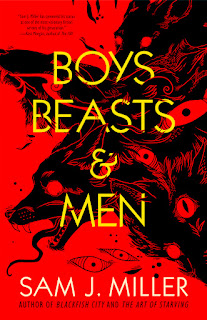 I'm grateful to Tachyon for an advance e-copy of Boys, Beasts and Men to consider for review.

Boys, Beasts and Men contains fourteen of Miller's short stories, linked into a meta-narrative by brief linking sections which seem to follow an encounter and exchange between two men ('I follow him out of the bar with no idea what kind of tale I'm stepping into'). Some of the stories arise more or less directly from what the two are doing or saying, while others make more sense in hindsight. The nature of the exchange itself, though, only slowly becomes clear and I don't want to spoil it.

The stories themselves are vibrant and wide-ranging. While they almost always have an element of fantasy either in the detail or, I think, in being set in slightly alternate universes, this often isn't the main point. For example, in the first, Allosaurus Burgers, the eponymous dinosaur turns up in a remote US town, catalysing a range of reactions from religious concern to conspiracy theories, but the story follows a boy and explores his relationship with his mother, sister and absent father. There's no justification for the Allosaurus itself but its presence seems to say something about what is erased, absent or forbidden to be spoken about in Matt's life.

The second story, 57 Reasons for the Slate Quarry Suicides, perhaps turns more strongly on its fantasy premise - no, you'll have to read it to find what it is - as well as introducing one of the main themes of the collection, the lives of gay men and boys in society. It's allusively written, those 57 reasons being given as a numbered list, which gradually develops into a narrative, exploring both the narrator's longings and failings (he lets down a friend badly) and the way he is treated. It also touches on another theme of the collection, alternatives and roads not taken - several stories here take actual historical episodes and add different features to them: supernatural disturbances, different outcomes.  The Heat of Us: Notes Toward an Oral History, for example, describes the Stonewall raid from numerous perspectives ('June 1969: The wet Manhattan air was like sick breath coming out of our collective throat') but steers the story into something strange, different, a kind of actualisation, I think, of collective rage and resistance to create a phenomenon that baffles everyone. That theme is recapitulated in Angel, Monster, Man, a story told in three parts - and of course echoing the title of the collection - where again, desire, rage and frustration seem to enable the physical manifestation of something that then takes a life if its own as the New York gay community of the 1970s and 80s is struck by the virus.

Death and loss feature here often. In Conspicuous Plumage a young man is absent, not spoken of due to the way that he died. It takes a voyage of rediscovery and reimagining to bring him back to mind. The  loss and regret are sometimes more, sometimes less, fantastical - more, for example, in Shattered Sidewalks of the Human Heart which riffs on the events off the film King Kong, bringing New York together in regret and repugnance at a shattering loss: a token perhaps of how we can be, and a story with a promise of something better arising.

And the loss isn't always due to a death. In Shucked, it's much more subtle than that - a chance encounter by two American tourists in a bar with an older man ('One of the burdens of being with a boy as beautiful as Teen') leads to... doubts... about the reality of their own relationship and about identity. In The Beasts We Want To Be, a really creepy little story set in the aftermath of the Russian Revolution where strange conditioning techniques to engineer human souls vie with eerie religious artefacts, it's all about the strange sense of unreality even as survivors find consoling relationships amongst the bloodshed. In Calved, a tender story turning on a father's relationship with his son in a nearly post-apocalyptic world, we see the catastrophe coming - a catastrophe stoked by misunderstanding and an inability, or refusal, to be emotionally honest - but can't do anything about it.

Relationships - whether between father and son, mother and daughter, lovers, or strangers - are often exquisitely twisted in this collection, not always completely messed up but ramified, vibrating even when seeking to unknot themselves. A sober churchgoing woman seeks out forbidden drugs to open the doors of perception, understand what her son is and hold out a hand to him. Absence undoes those relationships: 'while he was away, Hugh became someone else' or creates spaces in which they can be rebuilt or seen differently. And always, there is that framing story, providing some insights about where all this is going - though tantalisingly incomplete ones.

I simply loved this collection. While dark at times, it's never completely bleak, presenting moments of hope and, as I have said, resistance and weaving a seductive web around the reader.

For more information about Boys, Beasts and Men, see the publisher's website here.