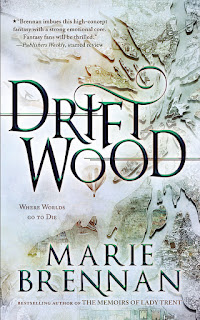 I'm grateful to the publisher for an advance e-copy of Driftwood via NetGalley.

In Driftwood, Marie Brennan creates something akin to a mythology for an imagined world (or worlds - it's complicated!)

We are invited to visit a derelict amphitheatre amidst the ruins of a lost civilisation. Here, over one night, the life of a man named Last will commemorated. Known to all, yet a mystery to all, Last is more an article of faith than a person: elusive yet ever present, he's even regarded as a god by some and many of the stories about him which we will hear are full of praise. Yet others have come to contest them, to offer harsher interpretations.

During the course of that night we'll be invited to hear for ourselves. We forma judgement. We may just be here for the stories and the company. Regardless, we'll learn about Driftwood and the worlds that comprise it. It is certainly an odd construct, 'Patchwork of world fragments, illogic made concrete'. Worlds - universes? - that have suffered their own foretold apocalypses somehow survive in a decaying state, and come out of a strange mist to contact Driftwood. Starting, more or less intact, on the outer edge, they are pushed further inward by new worlds arriving behind them. So the place evolves as a kind of plate tectonics of worlds, the surviving fragments shrinking until what was once an entire world may be reduced to a valley or a few streets or a cellar - until eventually they are destroyed in the centre, in the singularity called Crush.

Yet so long as they do exist, these vestiges retain their identity as worlds, with their own physical laws, their own magics and sciences. So for example you had best not be left in that amphitheatre at dawn or you will come to no good - but in a neighbouring worked a few hundred meters away, you will be fine.

Trying to survive as long as they can, the inhabitants of the different worlds travel and trade with each other and guides are sorely needed.

The man called Last is one such guide. He's seen by many as the key to Driftwood, and perhaps their salvation from it. Surely he is one who has lived many lives, who understands many things? Surely he understands what is happening - and how to escape it?

Across these stories we see Last sought out to provide advice or protection. We see him try to hide from all this seeking: cornered, he will reluctantly assist but there is a sense of burden, that he's being pressed to offer more than he can bear. All those religions, all those sciences, those kings and emperors trying to maintain their customs, their rituals, their superiority in a world that's being ground down, they all want support, advice, solutions. Their suns are dimming, the stars their myths depend on winking out, their sacred sites are fading away. Often the outcome of the story is about moving on from this, accepting the inevitable and perhaps seeing something saved - even if just a story, an echo of a trace of memory so that those lost civilisations can say, we were here too.

The composite, entropy-wracked, amalgam that is Driftwood makes, then, a compelling background and offers a lot of scope for stories - presented here as uncertain, contradictory, collected, containing and referring to older and older layers that nobody really understands but which are still treasured. I was reminded of M John Harrison's Viriconium cycle which has something of the same atmosphere of  a world wound down - I wouldn't be surprised if that place is crunching into the edge of Driftwood and just hasn't realised it yet.

A collection of simple stories, each self-contained but building into a cycle that is more than the sum of its parts, Driftwood is a fascinating and rewarding creation, conveyed in prose that can range from the solemn to the bitter to the darkly humorous but is never less than engaging. Brennan is at home sketching the linguistics of a world, bringing alive a marketplace ('...a thousand spices, each one distinct on the tongue. Aromatic flowers that danced in the gentle air, their seeds spreading I the ceaseless light. Serpents doxing in the warmth, sold as pets, as sacrifices, as food...') or imaging its complex religious life as she is evoking the long-lived, continually reborn bar, Spit in the Crush's Eye or describing with great flair the adventurers who brought the balloon to Driftwood and sought to map it - undermining the solemnity of purpose expected in a fantasy novel by saying they did it simply because it seemed a fun thing to do. Everyone might be doomed, swirling away into the pit, but there are lives to live and people here to live them. Finding a calm place between denial of the inevitable and obsession with it seems to be key - in Driftwood as in our own world(s).

A relatively short book, it's best read in one go, letting the story engulf you and carry you along.