I'm grateful to the publisher for an advance copy of Summer of Reckoning to consider for review - and to Anne Cater of Random Things Tours for inviting me to take part in the blog tour.

Summer of Reckoning is a crime story - in that it contains a crime. However, it's not a story of mystery, detection or deduction. There's no know-it-all detective here. Rather, the revelations come in the delicate, closely observed interactions between generations of a family, and their friends, rivals and neighbours. It's a book to be read slowly and carefully, observing the little twists and turns of characters who are not embarked in some grand scheme but simply watching their own lives and wondering how it came to this. They're not even watching those lives unravel, so much as seeking viewpoints that preserve the ability to believe that everything is, really, OK.

At the centre of the book are two teenage sisters, Céline and the slightly younger Jo, daughters of Manuel and Séverine - who are though referred to for the few few chapters as 'the father' and 'the mother'.  This, and the opening - in which Manuel beats Céline in an attempt to discover who is the father of her unborn child - set the scene for a family which is emotionally distant and where the parents (at least Manuel) are preoccupied with matters of appearance, face, honour. It's a family where the adults look back with regret, rather than forward at the future of the girls.

It is the South of France in the preset day, but patriarchal attitudes and misogyny imbue attitudes and behaviour. Women are thumped (or worse) to keep them in line (or simply because some man feels like it). Some of the scenes in the book are painful (there is a rape) but they are I think necessary. You need to understand the motivations, the energies that keep these protagonists in motion. It's all I think about place and status: Manuel feels less, because his grandfather was a refugee from Franco's Spain, because he works as a labourer unlike his land-owning inlaws, because he can't keep his daughters in line.

In turn, he looks down on other outsiders such as the 'Arabs'.

In this world, slights - a bashed car mirror, a word out of place - can have bad consequences.

Yet alongside this, Céline and Jo continue their lives, going to parties, breaking into empty villas to use the swimming pools. They desperately want not to become like their parents (Jo, in particular, dreams of getting away from the area) even as they seem destined got do just that (we see Séverine meet an old schoolfriend, and hear about their younger days, and the similarity with Céline seems striking).

There is a heavy sense of ennui, of the thick summer days. We may think of the South of France as a glamorous playground but here are the people who don't inhabit the glitzy world, whose days are spent working hard in the heat. There is a brutal side to their lives, there are pressures which Céline and Jo are just starting to perceive, pressures which have crushed Manuel and Séverine even if they hide that fact from everyone including themselves.

This is painful, insightful writing, writing that explains and sympathises with its characters while not excusing what we see. The translation by Katherine Gregor is lucid and readable throughout.

I'd recommend this novel - it has a lot going on in what is quite a short book.


About the Author and Translator

Marion Brunet, born in 1976 in the Vaucluse, is a well known Young Adult author in France. Her YA novels have received over 30 prizes, including the 2017 UNICEF Prize for Youth Literature. Summer of Reckoning is her first novel written for adults and her first work to be translated into English.

Katherine Gregor lives in London and has recently translated works by Alexander Pushkin from the Russian and plays by Carlo Goldoni and Luigi Pirandello from the Italian.

You can buy Summer of Reckoning from Hive Books, which supports local bookshops (especially important at this difficult time), from Blackwell's, Foyles, WH Smith, Waterstones or Amazon.

For more about the book, visit the publisher's website here.

And don't miss the rest of the tour - see poster below for details. 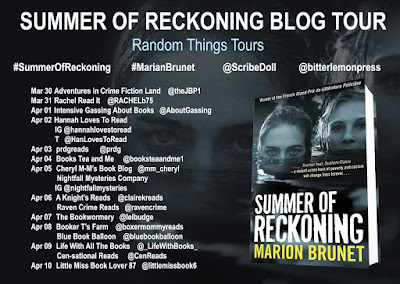