Review - Everything About You by Heather Child 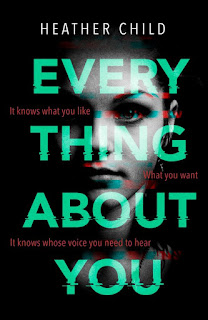 Everything About You
Heather Child
Orbit, 26 April
HB, 340pp

In a future London (perhaps 20-30 years from now, some time after a year of riots which have left whole districts derelict) 22 year old Freya survives a dead-end job in an IKEA-like furniture barn. At the start of the story she's selling actual, physical furniture, but there's an air of threat over the job as warehouse space is being converted for housing and the sales soon become virtual, supported by AI powered assistants. All that's left is flipping sausages in the cafe with her mate Chris, closely, too closely, watched over by their boss Sandor.

The AI theme is of course central here, as the book cover hints. It's a future of virtual and augmented reality mediated by specs, visors, hairnets that sync thoughts with the cloud and - the latest innovation from mega corp Smarti - "smart faces", virtual personal assistants that can adopt the persona of anyone (dead or alive) who hasn't declared their digital footprint "private". One example: a pink line overlaying one's field of view shows the best way to go, even to avoid other pedestrians around you. When, towards the end of the book, Freya's specs run out of battery and she has to manage this for herself, even such a simple task is hard and takes conscious effort. Or there is this: "There is no need to memorise or learn other languages, even dentists's appointments are arranged by her toothbrush when it detects enough tartar".

Privacy in such a world is... problematic... with the kind of tracking and inference currently seen online rife in the real world - as Freya moves about London, she's constantly served ads by screens or shop windows, bombarded with advice by her "Smartbit" (for example, her Health score changes depending what she eats or how much sleep she's had) and there's a pervasive system in the background of scoring things, from lattes to sexual encounters (so that "rated" has become a general term of approval). I have to say that following the Cambridge Analytica revelations, this book is brilliantly timed. Child has worked in digital marketing and the proof copy of the book I was sent points out on the back cover that the world depicted here isn't that far off(!).

Yet, while the implications of rampant AI are undeniably attention grabbing, the book is much more than an angry howl at the coming world of digital manipulation. At the centre is a sad story of Freya, her mother Esther and lost (adopted) sister Ruby. The book turns on what happened to Ruby, and on the guilt that both women feel about her disappearance. Child is simply brilliant at showing how, after a Ruby-esque personality surfaces in Freya's new Smartface, everything gradually begins to come apart. Freya is both revolted and enthralled by the opportunity to talk again to "Ruby". What does kt mean, though? Is it a hint that Ruby is still alive somewhere, perhaps trapped, perhaps needing help? As Freya grapples with the reality - or not - of what she's experiencing, we begin to see flashbacks to her life with the "real" Ruby, a vivacious, awkward young woman, a rebel and an explorer of London's weird side, above all a good friend, with a kind heart, who took the lonely Freya under her wing on arrival in London from the "north". (The reason for that arrival - her mother's finding a new job in what seems like a major life change - is never explained, though there might be hints - and I could finally guess at the why. Child uses this tangential approach a lot - for example, she describes how there is "a certain hush pervading neighbourhoods where the government might try to interfere, to recruit or deploy some of its many volunteers" - for what purposes? She doesn't say, but not good ones, surely).

It is though the relationship between Freya and Ruby that is central to the book, both their adventures and closeness as teenagers and, later, Freya's grappling with what's presented, convincingly, as being Ruby.  Child explores ideas about what makes identity, what makes humans human, and how we might, insidiously, come to accept something both less and more as a substitute (so in that way, yes, this book is a warning about the future - or even the near-present - only a more subtle one that you might think). She is I think spot on about the effect on Freya of losing Ruby. It's the hope that gets you. "...hope, once kindled, rages like a wildfire. Every time she has to douse it, a part of her needs to heal, and recently it has been a relief to close her eyes at night and know the next day will bring no firefighting."

Everything About You isn't without hope, there's a strong message here that we can, if we want, keep the option of living our own lives, rather than just following the choices the algorithms make for us - but that it won't be easy and and there isn't long left.

I mean, look at this. Even the book cover is tracking me... 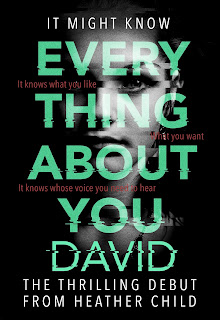