#Review - Our Child of Two Worlds by Stephen Cox 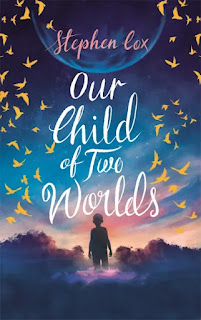 'Save all the humans!'

I'm grateful to Jo Fletcher Books for a free advance e-copy of Our Child of Two Worlds via NetGalley and for inviting me to join the social media blast.

I was really pleased to see this sequel to Our Child of the Stars coming.  Cox takes us back to his alternate early-70s, which is both familiar - the world is stuck in a Cold War and, in the US, the counterculture is running out of steam - and different. The ripples of Meteor Day, when an alien starship crashed near a small US town with one survivor, the child Cory ('Little Glowing Blue Frog' in his own language), continue to spread. The metal creatures known as Snakes are preparing to assault Earth (Moon landings have been attacked and satellites destroyed). Cory's people, the "Purples", have still not turned up, and Molly and Gene - his adoptive parents - are seeing their marriage under strain. Gene yearns to travel, but roaming Earth is impossible because of Cory and his complex situation. He'd really like to go with Cory to the stars ('He wanted to be the first human to breathe those strange, perfumed winds...') if his people ever return, but Molly can't abide the idea.

Our Child of Two Worlds is about what happens next - about Molly and Gene's attempts to balance their love for Cory with their own hopes and fears in a world utterly changed; about his need, with no role models from his own people, to control the powerful psychic powers with which he's gifted (there is real fear in his recognition of what he can do: 'Cory not-good no-he-isn't Bad Man!'); and about attempts, by various unscrupulous parties, to use or manipulate Cory for their own ends. (Yes, Dr Pfeiffer appears again).

When danger looms, with wider family threatened, the faultline between Molly and Gene is under even more pressure, with Cory, too, torn in different directions. Cox's nuanced portrayal of Cory is brilliant. We're not given a physical description, as though he was a different sort of thing, rather we see him through Molly and Gene's love - so occasionally a physical detail drops such as his 'strange striped ear', his inner eyelids (so he presumably has several), his tail - but there is no need to form a picture of Cory, rather all such glimpses are there to illustrate his emotions and mental state and the fullest description of him is as a loving, fearful and generous-hearted little boy on whom the hopes and fears of the word are projected.

I love the way that Cox weaves together big, startling, science-fictional ideas - Aliens! Earth under attack! Scary mental powers! - with very personal ones: a failing marriage where husband and wife want very different things, a scared child, a manipulative husband. And indeed, the wonderful, tiny details of parenthood - 'the trance of the midnight parent' or the beauty in 'seeing a child in healthy sleep'. I felt this portrayal of humans under strain - and not just Molly and Gene - was very realistic, and far from judgemental. Cox is at pains to make us understand the history and in all the arguments and disputes there is no absolute right and wrong (even, perhaps, when said Dr P comes on the scene). And he makes his alt-history seem so plausible - all the little details tell (Simon and Garfunkel have a hit called "Meteor Day", there are rumours (of course!) that the Beatles will get back together to sing for Cory). There are also some fun little points to be spotted, I think; I'd swear Cox has put a sign of his passing by into Molly and Gene's journey, I also thought I glimpsed both 2001 and War of the Worlds references as well as a belief that 'The Truth is Out There'.

None of that detracts from or diminishes the tension, as Earth's defences are stripped away by the Snakes. Rather, the level of jeopardy is emphasised because the crack that runs through the Myers' marriage is all about Cory - if he returns to the stars, should they go with him or stay behind? Will they have that choice? Is it selfish to think of such things, faced with the threat to both humanity and to Cory's people? Soberingly, as I write this in March 2022, we read that Dr Preiffer, considering that threat, 'had been able to stare in to the abyss that was the possibility of nuclear war because he believed the Soviet leadership was not wholly irrational...' - that suddenly seems very on-point.

Like the best SF, Our Child of Two Worlds is about us, at our best and worst, and how we respond to the best and the worst in others. Cory's people are from a very different, almost Utopian seeming culture and - as in one of Swift's novels - we're judged by that comparison, Cory himself noting it even as his love for his adopted parents and his friends burns bright. Are we worth saving, if we seem willing to destroy ourselves anyway?

A fiercely intelligent, engaged and often angry novel, Our Child of Two Worlds is moving, exciting and deeply readable.

For more information about Our Child of Two Worlds, see the publisher's website here and catch up with other blogs on the poster below 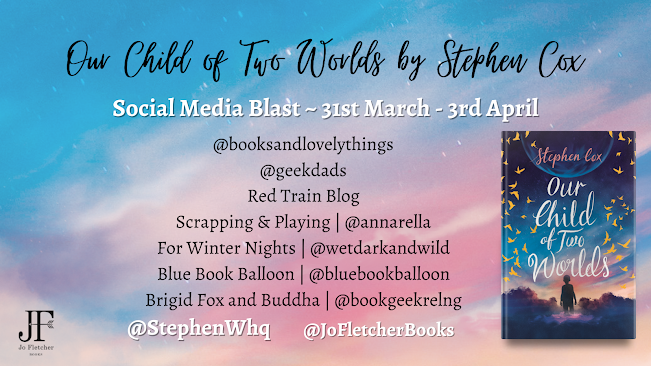