#Review - The Odyssey by Lara Williams 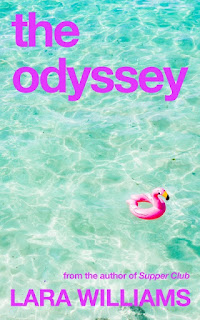 I'm grateful to the publisher for an advance e-copy of The Odyssey via NetGalley to consider for review.

There are some gleeful tricks going on in the presentation of The Odyssey. First, take that cover, with its glittering swimming-pool water and a pink inflatable. That points to an aspect of the cruise ship WA (no, I don't know...) that the book largely isn't concerned with. Relaxed, holidaying passengers are not the focus here. The longest interaction we see between the main character, Ingrid, and a passenger is when Ingrid very rudely needles an unfortunate woman to buy something in the gift shop that she runs.

No, this story is squarely about the crew side of the ship, and about it's all about the crew, and about Ingrid in particular. And the title - it hints at what's going on, at a return home via many strange adventures, but it doesn't I think capture the sheer weirdness of Ingrid's life. Although that is something that only builds up slowly. Anyway, be clear this isn't a story of sun, sex, and reconciliation on a romantic cruise.

Ingrid herself is a puzzle. We gradually learn the details of her less than satisfactory marriage; that she more or less fled that to a job aboard the liner; and that she's been working there for five years, apparently content with her tiny, self-contained cabin and a minimum of possessions, playing at "families" with brother and sister Ezra and Mia (they take turns to be the baby) and rotating between postings aboard (currently, selling tat in the souvenir shop; later, she's a manicurist, then a lifeguard, and so on - none of them roles she has any qualifications, training or apparently, any aptitude for). The book also follows a couple of Ingrid's adventures when she takes shore leave, once in Spain and once in Canada, both leading to epic drinking and debauchery. The contrast between Ingrid's cool, self-possessed narration and the raucous quantities of alcohol and bad behaviour that she gets through is striking. Together with her relationship with Ezra and Mia, it feels as though she is trying to pick her way though something that has gone badly wrong, but that she doesn't want to articulate.

This smooth course of life get a jolt when Ingrid is invited to take part in the "programme", a development/ mentorship run by Keith (we never find out his exact role on the ship but he's obviously pretty senior as he has his own office with a secretary). Mia especially seems to resent this - is she jealous that Ingrid seems in line for advancement? Concerned that the process may upset their (strange) world of play-acting? Or genuinely worried that it will damage Ingrid? Whichever, it does seem to be revealing increasingly detailed accounts of Ingrid's earlier life in conversations with Keith. He also uses these to impart to her his unsurprisingly shallow philosophy, derived and diluted from the Japanese concept of "wabi sari".  And these revelations to seem to open a division with Mia and Ezra and to trigger something self-destructive in Ingrid.

All through this there's a sense of something being missing, something Ingrid either sought aboard the WA or fled from on shore. The relationship with Mia and Ezra seems key, its undermining troubling but significant. And when things take an even darker turn, conditions aboard the liner becoming progressively stranger and even Ballardian, it's hard to tell whether Ingrid welcomes that (perhaps she will find what she's looking for, despite, or even because of, the strangeness?) or actually doesn't see it?

I loved the sceptical depiction of the cruise liner in this book. I've always been slightly suspicious of these liners - they long seem to have mutated from things you might mistake for ships to bizarre offcuts of the modern world, apparently self-contained and therefore full of possibilities for living in different ways while at the same designed to replicate all the worst aspects of modern society. There is a great store of weirdness to be explored here, and Williams sets about it with relish, highlighting the Upstairs-Downstairs division aboard with separate facilities for staff and crew as well as the distancing from any real sense of external reality (disembarking for one of those shore visits, Ingrid is surprised to discover where she actually is).

Yet Ingrid still seems to see the WA as a sanctuary. What does that say about her? What does it say about the life she's left? Williams is able to use this odd location to show us so much about Ingrid without needing to tell it, so that while Ingrid's narrated recollections seem full of detail and significance it's really her day to day life - conversations with her co-workers in the gift shop or the nail bar, or her experience of the trendily named menu items in the staff canteen as all basically the same - that really convey the knots and hidden corners of her character.

Intriguing, absorbing and very thought-provoking this book grabbed me, and I ended up pretty much reading it in one sitting, not wanting to wait a moment to see what became of Ingrid.

For more information about The Odyssey, see the publisher's website here.

Email ThisBlogThis!Share to TwitterShare to FacebookShare to Pinterest
Labels: 2022, drinking, liners, the sea