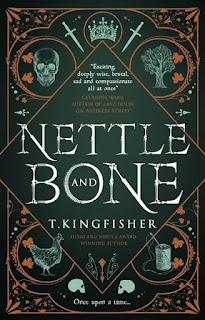 Nettle and Bone
T Kingfisher
Titan Books, 26 April 2022
Available as: HB, 336pp, e
Source: Advance copy
ISBN(HB): 9781789098273
I'm grateful to the publisher for an advance copy of Nettle and Bone to consider for review.
But where do I even start with this one?
How to describe Nettle and Bone?
The glib way would be to say something like: modern, twisted take on a fairytale, feisty princess, unpleasant Prince, caper. And yes, all those elements are here. But there's actually a lot more in this engagingly written story - which is emphatically not just another entry in the burgeoning alt-fairy tale genre (though, almost in passing, it knocks the spots off many of them).
Let's start again. Nettle and Bone is an attention-grabbing and absorbing story. This is primarily, I think, because of how well its central character, Marra, is drawn. Marra is a princess, yes, but only the third of three daughters. She has been stashed away in a convent (dedicated to "Our Lady of Grackles" - the religion in Nettle and Bone is vague and pleasingly diverse), very much the "spare" required by dynastic politics but not expected ever to amount to much. Which is OK by her, on the whole. Far worse things happened to her older sisters, things about which she can do little but seethe (there is plenty of time in the convent to seethe). More constructively, Marra delights in embroidery, midwifery and mucking out the goats, learning the value of achieving things which are small (perhaps) but important.
Kingfisher takes the time and space to develop Marra over some fifteen years, through hard work, love affairs and solidarity between her and the nuns, showing how Marra's hopes and fears (mainly the latter) are shaped by the shrewd politics of her mother, determined to keep the kingdom safe at any cost and by her increasing sense of dangers and threats that she can't do anything about. Marra has been taught to see herself as superfluous, of little account, as not mattering - a couple of scenes where she visits the more powerful "Northern Kingdom" make this clear - but she slowly comes to realise that she has not only the duty but the ability to reject that pigeonholing.
And the main theme of the book is the way that she goes about that.
Marra's way - which she feels herself into as much as plans, this book is all about doing the best from moment to moment, with the future unclear - involves making strange alliances. Of course this begins with carrying out three impossible tasks, in order to engage the help of a dust-wife, an enigmatic figure living in a graveyard. This is where we first meet Marra, raiding a charnel-pit in a cursed land (we're never told exactly how or why it is cursed, this book has a broad canvas and there is a lot going on which it is not the point of the story to set right). We then follow on her quest as she assembles an unlikely group who will help in the hopeless task of killing a Prince. They are a mixed bag: a skeleton dog, a chatty fairy godmother, a disgraced warrior and a demonic chicken.  All they have in common, perhaps, is being marginal people, rejected, banished or overlooked by the powerful world.
As, of course, is Marra.
Distrustful of each other at first, unsure of how they will proceed, this group slowly bonds as they confront one threat after another. Kingfisher's fantastical world is full of wonders, both beautiful and terrible, from the sinister bargains of the Goblin Market to the strangest landlady I'd come across in fiction, and - I want to stress this - nobody knows any answers. Marra's little group is erratically wise, constantly improvising and making leaps of faith to address problems while bickering and going off the point and debating. It's all actually great fun. I know I said above that the characterisation of Marra is the main thing here, but in fact it's about more than her - this whole group comes alive and as they get to know each other, they reveal so much: about the world they're in, their histories and dilemmas and perhaps too about the imagination of the author, all of it a joy to take in.
So much so that when the book eventually did wend towards its ending (realistic in that not everyone's problems are solved, threats remain and prices have to be paid) I really, really didn't want it to stop. Three hundred odd pages isn't long by the standards of modern fantasy but it is quite enough for the group that forms here to become firm friends to the reader, I think, and long enough that I really missed them once it was finished.
In short, another brilliant book from this author who's firmly on my "must read" list.
For more information about Nettle and Bone, see the publisher's website here.
Email ThisBlogThis!Share to TwitterShare to FacebookShare to Pinterest
Labels: 2022, dark fairy tales, Fantasy, magic