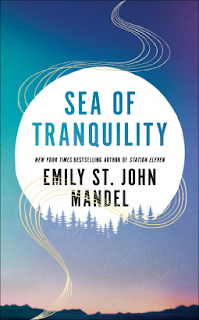 I'm grateful to the publisher for an advance e-copy of Sea of Tranquility via NetGalley.

Emily St John Mandel's new novel Sea of Tranquility looks at the little, unexpected links between lives at the largest scale, at cause and effect and coincidence. While we are dealing with a number of different stories, we are also only reading one story.

It revisits some of the characters, events and locations of her last novel, The Glass Hotel but from a different (and explicitly, parallel worlds based) perspective.  Edwin St John St Andrew, for example, who we meet in 1912 and whose story forms the first of the separate timelines here, is an Englishman who has travelled to Canada to make something of himself. What, he's not really sure,  and he bounces around living comfortably on his remittance ('They've booked first-class passage on a delightful train that features an onboard post office and shop...') until he lands up in Caiette, the small town that featured in the earlier book, his story meshing across decades with those of Mirella and Vincent from The Glass Hotel.

Meanwhile, if I can use the word, a 22nd century author, Olive Llewelyn, is visiting Earth from her home on a lunar colony for a book tour. During Olive's trip, a new and deadly pandemic breaks out - the description of which (including periods of lockdown, tracking of the day's 'numbers' and that troubling sense of psychic suddenness, of there being a before and now) vividly evoked, for me, the past couple of years. Two centuries on, another figure, Gaspery-Jacques Roberts, looks back to Olive's life and death and to that 22nd century pandemic. Of course, Sea of Tranquility isn't this author's first pandemic story. Her Station Eleven (soon to be released as a TV series) addressed a more serious, acute and apocalyptic plague, and The Glass Hotel was set in a world where that pandemic hadn't happened, with a kind of "thin walls between the worlds" sense of paths not taken placing the two books in the same space of possibilities.

Sea of Tranquility actually picks up more on the latter aspect, and the separate narrative threads here are part of that, although it would give away too much to discuss in detail how all these figures relate to one another. That - especially the way that the events of The Glass Hotel intrude - needs to reveal itself slowly as St John Mandel's story unrolls - but I will say that the separate threads here are very much in dialogue with each other, posing questions that only make sense, and are only answered (when they are answered) from that wider perspective.

The timespan of the story is the most obvious, but not the only, way this is done, giving a view not all the characters have themselves. Edwin will see the horrors of the First World War, a war Gaspery, in the future, has no knowledge of and has to research, just as Gaspery has to remind himself just when that outbreak of covid-19 struck (he wonders whether people meeting in early 2020 would be aware of or affected by it).  St John Mandel shows how even the most salient of current events eventually get tidied away out of historical awareness (just as many of us in 2020 may have been unaware until recently of the post Great War flu pandemic).

Another example of this wider perspective is the sense of messages being passed, under the teacher's nose as it were, between the characters. If you've read The Glass Hotel you may recall that Vincent's brother's based an art project her VHS recordings. Here, that work assume a new significance when observed from afar, preserving events and perspectives that raise questions centuries later. Or again, we see a phrase from the future scribbled on a wall, something that happened in the earlier book but assumes an ominous new significance here. All of this points to something - a secret, a concern - behind the intersections of the various storylines, yet intimately bound up with them all.

I hope that doesn't make Sea of Tranquility sound too contrived, plot-y or clever-clever. It's really not. Rather, what I found in this book were perfect depictions of complex and conflicted characters, and engaging, almost glowing, writing through every strand of the story. "I couldn't put it down" is a much overused, much abused phrase, but for me, Sea of Tranquility totally merited it. St John Mandel really can write, skewering a character with a single phrase - 'When Edwin's father was furious, he had a trick of beginning speeches with a half-sentence, to catch everyone's attention'; 'The neighbourhood seemed fairly tame to her and it wasn't that late, also she was afraid of nothing...';

There were also moments that made me smile, especially some that, I assume, directly reflect St John Mandel's experience as an author. Olive muses, for example, that 'if you've stayed in one Marriott, haven't you stayed in all of them?' That shows how St John Mandel refuses to SF-up her book. She doesn't make life on the Moon strange and advanced and different, depicting poverty there, for example, or a run-down neighbourhood, and nor does she point up life on a 22nd century Earth as strange and advanced and different, beyond noting the essentials: the US is split into a number of separate republics, the moon colonies are built within domes. Otherwise, there are hotels, book tours, air travel, taxis. A pandemic can rage uncontrolled then, as now. We might assume some of these things are rather different in detail to those we know now, but we don't need to be told exactly how they are different.

As I've suggested above, Olive's experiences often seem to parallel St John Mandel's. Her tour is for her book Marienbad. Before Marienbad she wrote three books that no one noticed and '"I've written two others since then. But Marienbad's being made into a film..."' Marienbad puzzles some readers:  '"There were all these strands, narratively speaking, all these characters, and I felt like I was waiting for them to connect, but they didn't, ultimately. The book just ended. I was like-"'

Olive ponders the comment for the next three days. Did she end her book too abruptly?

It's conceivable that this is directed, at some level, at reaction to The Glass Hotel which, kind of, does "just stop". My own view is that it ends in the right place because what leads up to that "stop" creates a rich and wonderful background so that the ending makes perfect sense. But maybe Sea of Tranquility, with its links to the previous book, might be a response to that, giving us more? If so, then I don't think it was strictly necessary - but I do think the result is glorious. Sea of Tranquility is completely self-contained and doesn't need the reader to know about the earlier book, but, taken together, the two stories are like parts in a musical work, adding so much depth and meaning to each other and sending me back to re-read the earlier story and think through the experiences and perspectives of the characters there.

In short, I'd strongly recommend Sea of Tranquility.

For more information about Sea of Tranquility, see the publisher's website here.

Email ThisBlogThis!Share to TwitterShare to FacebookShare to Pinterest
Labels: 2022, Canada, SF, The Moon, US