#Review - The Cartographers by Peng Shepherd 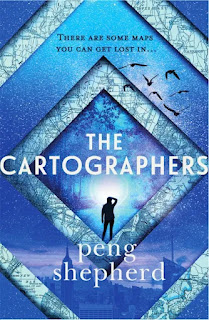 The Cartographers
Peng Shepherd
Orion, 17 March 2022
Available as: HB, 400pp, e, audio
Source: Advance e-copy
ISBN(HB): 9781398705425
I'm grateful to the publisher for an advance copy of The Cartographers via NetGalley, to consider for review.
The Cartographers is a vibrant and exciting mystery story with a real killer of a central concept (one which, however, I can't say very much about because spoilers) and it is a book that I greatly enjoyed.
Nell Young is in a corner, financially and professionally. Brought up in the rarefied academic atmosphere surrounding her cartographer father, Dr David Young, all she has ever wanted to do is work with him in the rare maps department of the New York Public Library. But seven years before, she was cast out of Eden, and now scratches a living - literally - by touching up fake copies of old maps (adding in little drawings of sea monsters to make them more saleable) for online seller Classic.
When Nell's dad is found dead in his office, she realises she has lost the chance to reconcile with him, and embarks on a quest to understand him instead. Orphaned - her mother died many years before - her only clue is the unremarkable 1930s gas station map that she finds in his desk...
As Nell begins to track down and question her father's oldest friends, she realises that there is something very strange in their background. And that somebody else may be interested in that very ordinary map.
I did, as I've said, greatly enjoy The Cartographers. It's a testament to the interest of Shepherd's story and the strength of her writing that the book is able to zip back and forth, exploring events of thirty years before from multiple viewpoints to paint in the background to what threatens Nell now, and without ever losing headway. I often find myself slightly floored if a book has a lot of flashback, but done well, as here, it maintains, rather than squashing, tension.
And the story that is teased out is rich and psychologically detailed - the story of a group of charismatic college friends, at the height of their abilities, joining together to try and make something truly new, a fusion of cartographic science and of art, a 'Dreamer's Atlas'. We see the allure of the project, and for me, also, Shepherd captured that sense of possibility, of being able to weigh how one will spend one's life and who with, that is I think a very special (and sadly brief) phase of growing up. We also see how that ends - with consequences that play out into the "now" of The Cartographers, where hope has become fear and spontaneous trust and love, suspicion and manipulation.
At the same time, it's an accomplished and polished modern thriller with a very real sense of menace. It's natural to that genre that the reader will be slightly ahead of Nell in knowing there is danger, and perhaps, eventually, also ahead in putting together the clues and determining what is going on. That doesn't detract from the drama of seeing her unravel her family's and friends' background and grasping the psychological tragedy that she has been shielded from.
How Nell will negotiate all this, whether she will be able to grow herself enough to understand her father and what he did, and whether she will be able to break that spiral in her own relationships - and above all, whether she can do any of this in time, well, you will have to read the book to see.
Intelligent, fun and rather sad, this is a substantial and engaging book that I'd strongly recommend.

For more information about The Cartographers, see the publisher's website here.