#Review - Murder Under Her Skin by Stephen Spotswood 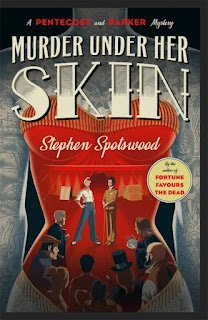 I'm grateful to Wildfire Books for an advance copy of Murder Under Her Skin to consider for review.

It was a joy to return to the 1940s New York of detective duo Willowjean (Will) Parker and Lilian Pentecost following their debut in Fortune Favours the Dead.

In the opening pages of the new story we see Ms Pentecost in court, turning the tables on a murderer despite the best efforts of his lawyer. We also see the toll that takes on her. Lilian suffers from MS, something that means courtroom jousting and long-distance travel will have consequences - the realistic portrayal of a long-term illness being one of the ways in which these books are, despite outward appearances, very far from being "cosy crime".

Another is the focus on figures who are very much outsiders in their world, one where conformism and keeping up appearances is becoming more and more important. Will, for example, is bisexual. The story will also explore the position of war veterans as well as the showmen and -women with whom Will previously travelled. When word arrives that an old friend of Will's from the circus has been murdered, there's never any doubt that Lilian Pentecost will want to take matters in hand, whatever the cost to her health. The scene therefore shifts from the big city to the small country town where Ruby died and which - surely not a coincidence? - is also the place she originally came from as the two women, arriving after a marathon train journey, set to work to disentangle circus rivalries, small town bitternesses and jealousies, and darker hints about Ruby's earlier life. This young woman, who appeared in the sideshows showing off her prolific tattoos, seemingly rejected the morality of her birthplace, never returning even for her parents' funeral. Might that act of rebellion have led to her death?

I really loved the way that Spotswood gets under the skin (as it were) of both communities and characters here. The circus he describes is in some ways more exotic than the upper-class moneyed world of the last book, but actually it comes across as much more relatable, more of a family. Similarly the town has its own ways and in particular Spotswood doesn't swerve from the fact that it displays open racism yet he resists the temptation to create clichéd backwoods villains. Rather we get what feels like a convincing and real network of relationships, both for good and bad, in each community.

Which doesn't make this an easy crime to solve. Both circus and townspeople are suspicious; the circus is failing, with crowds no longer flocking to the Big Top. There are hints of money troubles and defections. In the town, we see war veterans who have returned with injuries, visible or invisible, which nobody wants to hear about. There is also a revivalist religious element who are picketing the circus, and a Sheriff who sees the place very much as HIS town and who would be glad to pin the blame for the murder on one of the showfolk.

The truth is hidden among all this, but there is (of course) little time to get to the bottom of things.

Are Pentecost and Parker daunted? Of course not. But getting to the roots of it all will mean Will having to tread on uncomfortable ground, with Ruth's background and her own open to question.

For more information about Murder Under Her Skin, see the publisher's website here.