#Review - One Foot in the Fade by Luke Arnold 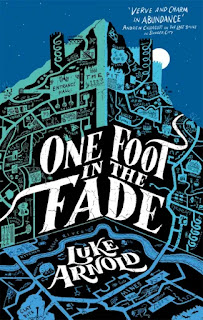 One Foot in the Fade (Fetch Philips, 3)
Luke Arnold
Orbit, 28 April 2022
Available as: PB, 434pp, e, audio
Source: Advance copy
ISBN(PB): 9780356516189
I'm grateful to the publisher for sending me an advance copy of One Foot in the Fade to consider for review.
One Foot in the Fade is the third book in the Fetch Phillips archive, and in my view, the best yet.
In the first two books of the series, we've seen Fetch, the "Man for Hire" in post-magical Sunder City - a sort of cross between an oil rush frontier company boomtown and a de-magicked City of Oz - inhabit the spiritual mantle of a noir detective, walking the mean streets, getting dirty, getting things done. But in One Foot in the Fade, Luke Arnold pivots and very firmly doesn't repeat the trick, giving us instead something rather different, forcing Fetch to confront some hard truths and, perhaps, grow up a bit.
To fill you in on the background, in case you haven't read the other books, in the world of Sunder City, there has been magic but it has dried up. (And Fetch was largely responsible for that - he has a Past, which is trying, with little success, to atone for by 'bringing the magic back'.) As a result this is a society where magical creatures - from elves to vampires to genies - are slowly dying, and where much of the "technology" that was previously relied on has failed. The result is an adjustment to 30s-style industry, proceding apace here in the hands of Thurston Niles and his corporation. The atmosphere of the stories is therefore bizarrely jumbled, with axes, swords and barbarian adventurers jostling alongside firearms, cars and telephones. Arnold is very good at drawing all this together so that it makes sense, creating a unique atmosphere and sensibility in his writing, one which I really enjoy.
Well, in One Foot in the Fade, things get real. Fetch thinks that he has, at last, a lead on a way to restore the magic to his world. That takes him out of Sunder, one of a bizarrely mismatched party of adventurers, seeking a cursed artefact guarded by a castle full of (now ex) Wizards. It's fun seeing Fetch, his friend the straight-talking, hard-drinking librarian Eileen, a fading Genie, a taciturn werewolf and young whippersnapper Larry, set out bickering in a sedan car (that Larry nicked from his dad). There are of course many adventures along the way and, rather to my surprise, a sense that Fetch is actually growing up, becoming more willing to listen to others and even to learn things.
What none of that alters is his obsession with restoring the world. It's become clear over the first two books in this series that there is a price to what he's trying to do, but the unappealing nature of the alternative - Niles's industrial revolution - has only made Fetch dig his heels in and search harder for an answer. Now that he thinks he's found one, he becomes positively obsessed and there seems a real danger that the quest will cost him everything - friendships, safety, perhaps even his life. After all, what else can he do? In that sense, this book moves way beyond the themes of the earlier two, posing questions about responsibility, self-deception and acceptance, questions that Fetch spends most of the book avoiding.
That, perhaps, makes the ending to this third book slightly more downbeat than the previous ones - I don't think you can really say there is a victory here, though perhaps, instead, Fetch finds some space, some clarity, some understanding of what he's about and how to proceed. That still, though, leaves him with a mountain to climb before he can reconcile with the new world he's living in, but at least it's a start.
STRONGLY recommended.
For more information about One Foot in the Fade, see the publisher's website here.