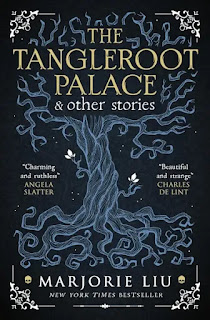 I'm grateful to Titan for an advance copy of The Tangleroot Palace to consider for review.

The Tangleroot Palace contains seven stories, each with a short afterword giving context. While, there are I think, all squarely fantasy - and some are set in this world - they are all, in various ways, also fairytale-adjacent. Woods feature prominently, as does magic, and figures who might, as you hurry by, take for witches. Monsters abound, whether powerful magicians, scary creatures or dangerous men, and it's often a young woman who must understand what's needed and face down the threat.

In the first story, Sympathy for the Bones, Clora is apprenticed to 'old Ruth', both of them living in a remote, rural district of the US, perhaps in the first half of the 20th century. They are wise women, helping out with the problems and concerns of their community, and with a particular talent for dealing with troublesome men. But, as gradually becomes clear, Cora isn't happy herself and is considering using her magic for more personal ends. I found great sense of place in this story, and space and time given to credible human emotions even in a world of strange and dark possibilities.

The Briar and the Rose is set in a fantasy world and is (as the title suggests) a take on Sleeping Beauty which addresses and responds to the more problematic aspects of that story - the lack of agency of Beauty herself and her abuse while enchantedly asleep. The Duellist is a magnificent character, a female mercenary and a woman of colour hired to guard courtesan Carmela (so, perhaps a hint of the vampire?) Also featuring is Rose, with whom the Duellist (also called Briar, but only on a Sunday) develops a deep and bewitching romantic bond. No princes need apply!

The Light and the Fury takes place in an alternate, steampunk nineteenth century China where Xing, a proto superhero, battles against the machinations of the wicked British, against treason and familial disloyalty. I loved this story, an incredible mashup of genres and history but also a tale with righteous fury at its heart and a heroine who has, herself, plenty of heart.

The Last Dignity of Man also plays with ideas of superheroes, but also alternate science and power. Alexander Lutheran's scientific enterprise both echoes and contradicts his nickname of "Lex Luthor". There are no superheroes, but might there be villains? An intriguing take on destiny and the beguiling of self-image, this was a fun story that kept me guessing to the end.

Where the Heart Lives is a prequel to Liu's Dirk & Steele paranormal romance/ detective series, presenting an origin for the agency and introducing Lucy as she arrives at Miss Lindsay's house, fleeing her abusive father in a similar setting to that of Sympathy for the Bones. Her arrival catalyses change in the woods and the freeing of a captive but most of all, it requires Lucy herself to grow up very quickly. With tendrils reaching back into ancient myth, Where the Heart Lives balances many elements and was fun to read.

After the Blood is a story with a rather post-apocalyptic film, with the world overrun by monsters - I was reminded of zombie or werewolf fantasy, with scattered outposts holding out against the monsters. But these are monsters that see to focus only on some, and against whom those few have, it seems, means of defence. Complicated by changes in the world that have led to widespread religious prejudices, this was a nicely different "us against the monsters" take.

Tangleroot Palace itself, the final story in the book, is novella length. It's perhaps a more out-and-out fairy tale with a king (whose kingdom is threatened), a princess (facing unwelcome marriage to a barbarian chief) and a Quest. Initially Sally sets out looking for a way to avoid said marriage, but her journey develops into a formative experience with her learning both about her kingdom and her people - but also about the peculiar threat that dwells in Tangleroot Forest. With notes of heroism, sacrifice and the discovery that all is not it seems this was a satisfying and fun story.

Overall this is a very strong group of stories in which repeated themes are explored and, sometimes, similar situations and figures are examined form contradictory perspectives. It's one of those collections where each story adds something to a whole, a wider sense developing of a way of looking at the world.

For more information about The Tangleroot Palace, see the publisher's website here.