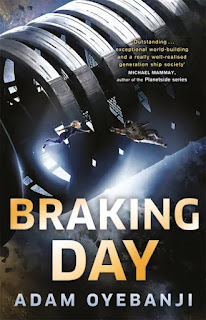 Braking Day
Adam Oyebanji
Jo Fletcher Books, 5 April 2022
Available as: HB, 368pp, audio, e
Source: Advance copy
ISBN(HB): 9781529417111
I'm grateful to Jo Fletcher Books for an advance copy of Braking Day to consider for review.
Braking Day is an intelligent and atmospheric SF thriller set aboard a generation ship as it nears the end of its voyage. I enjoyed the scuffed and worn atmosphere of the Archimedes, 132 years into the mission and 6 generations of crew on from the original pioneers. Constructed as a series of habitat wheels mounted on a central core, the ship has lost one segment - "Hungary" - due an asteroid strike and another - "Ghana" is failing as its bearings give out. There is a palpable air of decay and a weariness among the crew of the Archimedes, combined with a fatalism (at least from most) that the mission will, indeed shortly end. Elsewhere in the Fleet, another ship has problems with its hydroponics. They won't be arriving a moment too soon at Tau Ceti, the "destination star".
And yet. Some on board are still wary of the idea of planetfall. It seems weird and unnatural to contemplate living on the outside of a ball of rock, unshielded from the radiation of the star. And others have moral scruples. The faction known as "BonVoys" want to prolong the journey, saving the new world from pollution and exploitation and staying in their safe, familiar vessel.
Ravi MacLeod, a young trainee engineer, shares some doubts with the first group. But relistically, the journey can't go on for ever, and he looks forward to just having more space than his current cramped quarters allow. That's if he ever makes it to the planet - life has been particularly challenging lately. The MacLeods are seen as, basically, thieving scum - Ravi's dad was condemned to the recycler several years before - and he feels at risk of being thrown off his training course at any moment. The division in this story between "officers" and the rest is stark, reinforcing the dystopian atmosphere of the book where anyone over 75 is seen as "Dead Weight" and recycled; where water is scarce, and treated as a unit of value; where despite everyone being "crew" with a single mission, power and prestige seen to inhere in particular families;  where those families seem to have their own agendas for the vogage.
Other problems haunting Ravi include headaches, hallucinations, and disturbing dreams which seem to be trying to tell him something about the Fleet. This is not only worrying but it makes it hard to perform his - very strenuous - daytime duties. Desperate for help, he turns to the only person he can think of - his cousin Boz. Boz is, however, a quintessential MacLeod, a bad girl with fingers in many dodgy pies and who has herself come within a whisker of being declared Dead Weight. She, too, may well have her own plans for the future...
The interaction between model pupil Ravi and near-delinquent - even if she is a brilliant coder - Boz - we a great delight in this book. The light their different attitudes cast on the social structure of Archimedes helps make the story very, very real and those social structures are really the heart and soul of the book. I wasn't completely convinced by the science, especially the pseudo-gravity, but in my view that really doesn't matter so long as it's basically plausible: what counts rather is the credible treatment given both to the evolution of society aboard the ship, its current pathological form, and the impact of that on the fifth and sixth generation crew who never asked to be born into such a strange situation.
Above all, perhaps, the focus this story casts on the why of the trip. Why would you commit to that one way journey, knowing your kids, and their kids, and their kids, will live out their lives aboard the ship, with only distant generations having any chance of arrival? Oyebanji makes out a very plausible case in the future of Earth and it's one that will drive a potential conflict for those descendants, albeit one they don't expect. Things have been hidden form the travellers, and Ravi and Boz may be the first since Launch to understand the full truth - and the nature of the danger that threatens everyone's dreams.
Of course, Ravi's own dreams and hallucinations do prove to be linked to this central mystery. We're not kept on tenterhooks to the very end about it as he and Boz work out what it is, rather enlightenment comes earlier (though some mysteries remain) moving the second half of the book more into thriller and conflict territory as they have to face up to a responsibility for the Fleet and the 30,000 or so humans within it. That position poses particular dilemmas, especially for Ravi whose self-image and life plans have all been about distancing himself from his raffish family and progressing within Fleet society - what will he do if all that respectability is at risk because of the action he needs to take?
Very much about growing up and taking responsibility, but also about learning to question and think for oneself, Braking Day is very effective in matching the external challenge to a protagonist with whom the reader will I think feel a lot of sympathy.
For more information about Braking Day, see the publisher's website here.