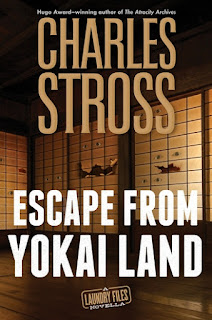 Escape From Yokai Land (Laundry Files, 12)
Charles Stross
Tor, 1 March 2022
Available as: HB, 81pp, e
Source: Bought from Transreal Fiction
ISBN: 9781250805706
I loved this novella as I've loved all of Stross's Laundry books. Unlike some of the longer works, it's a fairly simple story: set before the cataclysm of the New Management, it gives us a glimpse of Bob Howard visiting Japan on "business", as teased a couple of times in other stories where this trip conveniently kept him absent from crises which, with his newly-acquired abilities as avatar of the eater of Souls, he might have bossed rather too easily.
So essentially, a supernatural crisis is brewing in Japan and its equivalent of the Laundry has called for help, expecting Angleton (though, as becomes clear, not with any great enthusiasm: he has a reputation...)
Instead they get Bob and, rather than let him loose right away, decide he needs to be tested first. There is therefore a series of interesting scenes between Bob, his liaison Yoko Suzuki, and a series of bizarre supernatural infestations, before we get to the real bad. I enjoyed this, Stross is as ever sharp and economical in summing up the social side of things - the office politics, prejudices and little quirks of corporate life - and in Yoko he creates an interesting protagonist it would be good to meet again (though as the Laundry series is moving to a close, I suspect we won't).
In short, it's nice to get a glimpse of the powered-up Bob, though the book does show why Stross has had to hold him back from the more recent Laundry novels. His new powers don't though protect him from senior management and HR. It was a shame that Mo didn't appear, though I live in hope that we will see her again soon.
You'll obviously want to read this if you are following the Laundry saga, if you aren't it probably won't mean much to you - but then you have the blessing of being able to read the series form the beginning so you should get on and do that.
For more information about Escape From Yokai Land, see the publisher's website here and Mr Stross's online Q&A here.