#Review - The Justice of Kings by Richard Swan 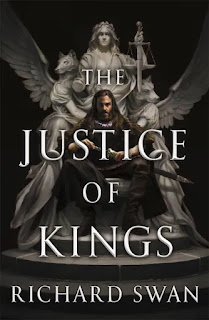 The Justice of Kings
Richard Swan
Orbit, 24 February 2022
Available as: HB, 413pps e, audio
ISBN(HB): 9780356516424
I'm grateful to the publisher for an advance copy of The Justice of Kings to consider for review.
Well. this is one of those books that's hard to review, I'm very tempted just to say READ IT, but that wouldn't be very useful, would it?
So I'll try harder. The Justice of Kings is a type of fantasy I don't often read - an epic, sprawling depiction of a world filled with magic, armies, politics and strange names. I think the reason I read few of these books is less that there aren't brilliant ones around, there are, it's more a feeling that this kind of thing has been done so much I will either be let down by a book being derivative, or by it trying too hard not to be. Does that make sense?
Fortunately, I also receive some excellent recs from a certain person at Orbit and when Nazia tells me to take notice, I know I should listen. So here we are and here's The Justice of Kings, a book that for me felt refreshingly different while not visibly straining to do that.
This is helped immeasurably by the viewpoint. The story is seen from the perspective af young woman - Helena Sedanka - who is employed as clerk to an itinerant judge. Sir Konrad Vonvalt is a sworn upholder of the Common Law, travelling endless muddy backroads from village to village and town to town with just Helena and his assistant, Dubine Bressinger. This is a group of well-realised characters: the rebellious and slightly bored Helena, Sir Konrad, an ex-military man and the slightly mysterious Dubbing who's devoted to Sir Konrad and at times, treats Helena quite harshly when she seems to display and lack of respect for his master. The three know each other really well, and the blurred relationships here - colleague, boss, friend - and endless journeys create a lot of scope for both sympathetic understanding and for drastic misunderstanding. Helena and Dubine are, for example, often forced to share a bed in a scatty inn or leaky manor house, but nothing "happens" between them. A running gag has Helena desperate for something to eat on arrival, cold and saddle saw, at a stopping point but ordered instead to Sir Konrad's chamber to discuss an arcane point of law or politics. This girl really needs to eat, I found myself saying many times as I read the story.
Setting things up for a trilogy always takes a good deal of work, and I think the opening here is as goods as I've seen anywhere. A judge, of course, provides a way in to most parts of society - as part of the apparatus of an Empire, Sir Konrad has a function that allows him to ask questions, even of the functionaries of that Empire - and the nature of the role means there will be varied opportunities to do this, the larger part of this story focusing on one, the murder of a noblewoman in a trading port.
At the same time, Sir Konrad's powers aren't unlimited. They're bound of course by the law itself, but also by a standoff between state and religion, the latter being a vital part of the bonds that hold together a fairly young Empire. They're also limited by the dynamics of that society, formed from many separate, conquered nations (the wars are still fresh in many minds, causing resentment, prejudice and all kinds of frictions). That makes his job hard at times, as in this story where the murder investigation - this book is very much a "whodunnit" -  will tread on many sensitive toes, exposing political and religious schemes and leading in the end to a minor war.
Wider political turmoil is also prefigured from the very start, in Helena's introduction - she makes clear that she is writing this account from the viewpoint of old age, and that unspecified disasters have overtaken the Empire, so while we're assured that she will make it through this book (though not necessarily unscathed) there is a sense of coming darkness over everything, and Sir Konrad's role as the upholder of law and justice seems increasingly menaced.
In short, there's a lot going on in this book but the necessary scenesetting is done very skilfully and always supports the needs of an involving an ingenious immediate plot, while providing the groundwork for a much wider story. The depictions of authorities - whether legal, political or religious - is convincing and subtle and I enjoyed the book's recognition of the dark side of Empire as the characters here deal with the aftermath of war, the absorption or appropriation of natures and cultures, and with discrimination (in an apparently multicultural State) between peoples and groups.
The Justice of Kings was a joy to read, a properly immersive story that demanded attention but also a decent amount of time: there's a lot happening, the text is rich, the characters are well-rounded and don't always do what you expect or want (at times, teenage Helena is quite whiney, but I did sympathise) so the story takes time and attention, not skimming of fast reading.
To learn more about The Justice of Kings, see the publisher's website here.
Email ThisBlogThis!Share to TwitterShare to FacebookShare to Pinterest
Labels: 2022, empire, Fantasy, law, Politics, religion