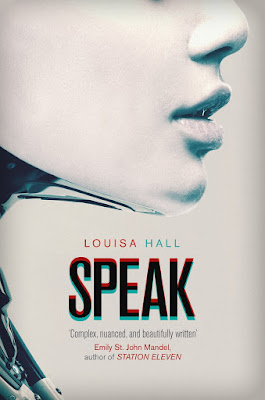 This is not a straightforward book to read, or review.

As to the former, the narrative is split between multiple viewpoints that don't, in the end, merge. As to the latter, it would be easy to vanish down the "is this SF or isn't it?" rabbit hole. I don't intend to do that - and I want to say at the beginning of this review, in case I've already put anyone off the book, that it is a rewarding novel of ideas and while they might not join up, the viewpoints do, in fact make sense as a whole, seen, perhaps, as characters - or narratives - in dialogue with one another.

Now, to set the scene. Around 1980, my uncle built a computer from a kit which he let me play with. It could easily be programmed and I had a book of BASIC programs, including ELIZA ("Electronic Life Imaging for Zooforms and Androids") - two A4 pages of closely typeset code, typed in without mistakes, which made the computer into a conversationalist. It was breathtaking.

In Speak, Louisa Hall brings ELIZA - or rather an ELIZA like program known as MARY - to life again. The ability of this program - in a more advanced form, thirty years in the future - to communicate and understand (or not), and the implications of that, are central themes.

It's all about speech, silence and loss, experienced by a diverse group of characters.

There's the original Mary, a young English girl travelling to the American colonies in the 1660s. Married off by her family, her only comfort is her beloved dog, Ralph. Mary pours out her thoughts and feelings into a diary which is found and edited three hundred years later by Ruth Dettman. Ruth is an academic, a Jewish (I think) refugees to the US from Germany. Her 20 year marriage to computer scientist Karl is breaking down with both partners retreating into silence, talking - or writing - past each other communicating not with each other but with us via pained, angry texts.

It was Karl (also originally a German refugee) who wrote the MARY program, which is then improved and developed over the years, but he gradually turns his back on AI, seeing it as a dangerous trap and likely to be used for the wrong reasons. Ruth, in contrast, wants Mary enhanced, given memory.

In another strand of the book, Stephen Chinn, incarcerated in a Texas prison, narrates his life. A typical computer geek, socially awkward, bullied at school, he went on to make a fortune in IT, spotted the mathematical basis of communication and used it as the basis for a pick-up manual and online dating site. Then he develops MARY to form the basis of a chatbot, and of "intelligent" dolls to be companions for children. Something has, however, gone wrong and Stephen has been prosecuted for his work, the chatbots confiscated and piled in warehouses where they sadly run down, waiting for the companions they'll never see again. We see some conversations in transcript between a girl Gaby and an online version of MARY, meant to prove or refute the charges against Stephen. It's hard to see this whole process as anything more than a blind lashing out against him by society: the transcripts reveal what otherwise we're hardly aware of, that these children live lives of isolation in prison-like "developments", with no movement allowed as climate change and desertification overtake the United States. The response of the authorities to them beginning to "freeze", ceasing to speak or respond, by isolating them further, seems unlikely to help.

To add to the sense of silence and isolation - Mary at her diary, Stephen alone in prison, Karl and Ruth talking past each other - we have a separate strand formed by letters from Alan Turing to the mother of a (dead) friend. These explore the same themes as the rest of the book - the AI developments leading to a the technology allowing MARY to speak, the idea of looking both back and forward, of series with terms dependent on past and future - of silence and isolation. Turing, of course, was a real person so his part of the story is darkened by our knowledge of how he will be treated, disgraced (in the eyes of contemporary society) and take his own life.

It's a powerful book, in which unsettling echoes of the same ideas are made to travel backwards and forwards in almost a dreamlike way. The protagonists almost seem to be talking to one another, but never quite do: indeed they seem to be in the closest communion when silence actually falls between them, united in their various griefs.

The book has a dreamlike quality. While rooted in an idea of scientific, technological progress and learning, some of the background seems almost that of a fantasy world: for example, arriving in the US from Europe, Ruth gets a job working in the "Office of Telescope Crystals" - which almost sound like a quasi mystical device. Or is it just one of those strange WWII codenames, intended to preserve security? Similarly, the way that Ruth and Karl escape from Germany seems almost fairy-tale like in its simplicity and ease - while their families may be doomed, the sort of suffering that went on in the War is only directly reported or described in what happens to those abandoned, self aware dolls that we see being transported piled in trucks at the start of the book. Stephen imagines them, his children, marching out of the desert to free him, but it doesn't happen.

And the most gut wrenching moment of sadness in the book comes, perhaps, from another direction entirely. (While this isn't a book that seeks to play on the reader's emotions, there are parts of it that are really quite painful).

I see I've been leaning towards describing what happens in this review. I don't think I've dropped any spoilers, because what happens is much, much less important than why, how and what it means' Like a hologram, that is encoded in every bit of the text but only becomes clear as the different narratives are allowed to interfere and build up a complete image, and is difficult to get across in a review like this.

All I can say, at the end, is, read this book. Let it speak to you.