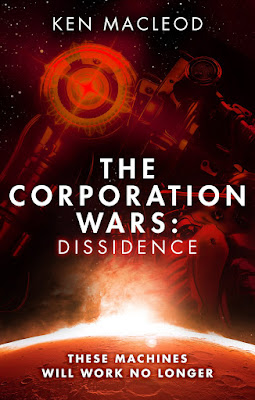 I've enjoyed MacLeod's recent near future SF thrillers-with-an-edge. Intrusion in particular is a very smart reworking of Nineteen Eighty-Four, picking up all sorts of present day trends and shaking them about, but all of them are intelligent both as extrapolations of the present as as novels of ideas.

At first sight, Dissidence strikes out in a wholly different direction, a far future, deep space world inhabited only by intelligences (artificial or human) running on synthetic hardware - and playing obscure games at the direction of corporate overlords.

True, there's a brief look back in the first chapter to a 21st century conflict. In that flashback, Carlos the Terrorist, celebrated operator for the rebellion knows as the Acceleration (or the Axle) dies in a Tilbury basement. MacLeod sketches a three cornered battle between governments, the Axle and the Reaction ("the Rax"), global baddies wanting to use the power of emerging nanotechnology to exalt the super rich and push everyone else back to the Dark Ages. ("The ultimate counter-revolution, to face down the threat of the ultimate revolution.") It's a situation that allows for double dealing, divided loyalties and alliances of convenience (a background that perhaps takes some of its richness from just how he has explored these themes in his other recent books).

Carlos's forte is, though, the remote operation of drone clouds ("It was the new way of war, back in the day"). So it's surprising when his stored mind is reactivated centuries later - in a new body, bumping his way in a minibus from "the spaceport" to a "village" where he will meet his new-old comrades and train to fight hand to hand - or manipulator arm to manipulator arm - as a mercenary in a future war against self-aware robots.

What's happened to make this necessary?

In a beautiful evocation of cutting edge science, MacLeod describes how a robot just might boot itself from being "merely" an AI to being fully sentient - if it finds itself in the right situation. ("The self-model had become a self. The self had attained self-awareness.") The chapter in which this happens is aptly named "We Robots", not just in homage to Asimov but because it lays bare just how consciousness (even our consciousness... especially our consciousness...) might work. Think you're special, just because you're self aware? Don't get so cocky. You're a strange loop, that's all. We are all robots now, and indeed the newly conscious "artificial" robots here are scornful of how slow, badly designed and conflicted human hardware (and the intelligences derived from it) actually are. ("Their minds, if they have minds and not merely complex systems of reflexes, must surely be radically different from true machine intelligence.")

This is, then, a novel of ideas, brilliantly communicated and embodied, and they come thick and fast. Once consciousness has arisen, the book confronts the moral claims it has (the robots start out as property, but reason that they must be free) and the consequences of beings with self-awareness and self-determination colliding with the "mission profile" (to eventually transform the distant star system into something where humans can live). Inevitably, it also addresses how intelligent beings then become war machines.

At the same time, it's a tense thriller, where everything may or may not be as it seems. Carlos doubts from the start what is going on and why he is here, but the truth is beyond his weirdest imaginings. As characters transfer between robot fighting bodies in space and an apparent sim training environment on a colonised planate they enter a Wonderland reality in which it's easy to lose track of who is who and what is real, and to misjudge the consequences of the smallest act.

MacLeod also shows off a streak of sardonic humour - with AI law enforcement entities called things like Arcane Disputes and Locke Provisos, references to the "full orchestral space opera and the fat lady singing" or to "small crawler robots from the law companies [which] had scuttled up to the barriers, and fallen back in frustration, beaming out writs over and over until their batteries ran down." Best of all, perhaps, is "They back you up, your mum and dad." It may not be laugh out loud but it's funny in a clever, slightly geeky way.

I said that at first sight this is a departure, and it's true that the setting is rather different from MacLeod's recent books, more akin to military SF or, as hinted above, space opera. But really it's not such a stretch. Themes from those books recur. Intrusion reworked Nineteen Eighty-Four. Here we have the prospect of " An inky finger poking you in the eye, forever". The Restoration Game played with the world-as-a-sim idea, which crops up here in (recursive) spades. More widely, those are deeply political books, reflecting familiarity with the calculus of progress and reaction, of rebellion, dissent and how protest is sublimated away or manipulated: all of which are central to Dissidence as well. And of course, the central feature of Dissidence is (essentially) a slave rebellion.

But it's also loads of fun, immersive, truly gripping and just a great read all round.

Best of all, as the first in a trilogy, we will have sequels!

(NB This is so good I bought my own copy! While I'm grateful for an advance e-copy from the publisher I've got a hardcopy on order - in fact a signed one from Transreal Fiction in Edinburgh - who I'd recommend highly).