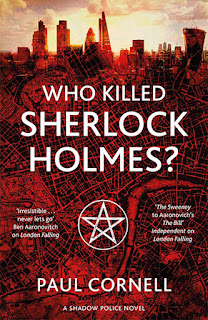 There are, it has to be said, a fair number of "weird s*** in London" novels, many, even, of the "supernatural police" variety. But I don't think any author has been as audacious, as ruthless as Cornell. There's a moment in his last one, The Severed Streets, that you'll know if you've read it. I'm not going to say here what it is, in case you haven't read that yet, but what Cornell does there... well, after that, anything can happen. And here it does.

Death of a ghost? Gods of London? Hell about to swallow all those who have lived in the city? Not just one Sherlock Holmes, but three, no, four, no... actually I lost count. There's a lot going on, and it's taking a toll on the Shadow Police (a name which I think hasn't actually appeared before). Indeed, that's one of the other distinctive things about Cornell: his characters suffer. Lisa Ross has given up all future happiness. She lives life in a numb haze. DI James Quill is so scarred by fear for his family, knowing as he does that they will go to Hell with all other Londoners, that he's falling apart, becoming ineffective. Part of it is that he can't tell what he knows, and it's destroying him. The team, in short, isn't a team any more. DC Costain carried out a terrible betrayal, with the best of intentions, and he's haunted by that.

A potential fifth member of the team, DS Rebecca Lofthouse, is keeping secrets of her own. She's been a rather peripheral character so far but is about to get some attention herself from the Smiling Man, the sinister figure who seems to be the source of something very bad in London.

Cornell weaves his threads together skilfully, setting up a string of crimes which seem to begin with the death of Sherlock Holmes's ghost. Arising from the "Holmes mania" caused by three separate TV versions of the Great Detective filming at once, something seems to be being made real. To be being Remembered in London. Yet the focus isn't all on the crime, but equally on the hurt people trying to unwrap everything and on exploring the mystery that is London.

What I especially enjoy about these novels is the sense that "our chaps" don't know it all. They are learning about this London stuff as they go along, spinning plausible theories which are often proved wrong, getting snippets of information from informants and going into situations with little real idea how they'll get out. (Um. Perhaps a bit like real policing?) That is more plausible to me, somehow, than bumping into an aged wizard who will rapidly update you on the situation, offer you a magic potion and advise you not to go South of the River when there's a full moon. (Whether that's really sound advice or not).

But this lack of knowledge also places them in danger and, as I said above, they suffer and they suffer convincingly. Indeed in Quill this book has at its centre I think a character who is either going through depression or experiencing PTSD or perhaps both and showing the range of behaviours that brings with it, including, in one harrowing sequence, setting off into London - into Hell? - convinced he knows the answers when he is clearly delusional and vulnerable

It's not all gloom of course. Cornell laces the story with a wicked thread of humour, whether it's allusions to films that aren't all about Sherlock ("He's not Satan" said Ross. "He's just a very naughty boy") or just nice asides ("You have friends in Hell now.") He nods to real people and things (for example the excellent Baker Street Babes). He's also quite sharp in placing the action - for example on Moorgate: "The way the architecture toyed with the history of the place seemed... insulting, askew. That meant bad things could happen here." That made the hairs on the back of my neck stand up. I don't want to get all spooky but I have walked along Moorgate and felt that, although I couldn't put it into words. I'm not saying that Cornell's stuff is true here but he is onto something. Brrr.

It's a compelling read, really in a class of its own, whether you're a Holmes fan who's read all the books or you've just imbibed the mythology. And you'll be glad to know that something is coming up in this London... the book ends shortly before Hallowe'en, and that means there must be wickedness afoot in the next instalment, surely?

I'm honoured to be publishing a piece by Paul here on Monday 23 May, as part of the Who Killed Sherlock Holmes blog tour - see below. 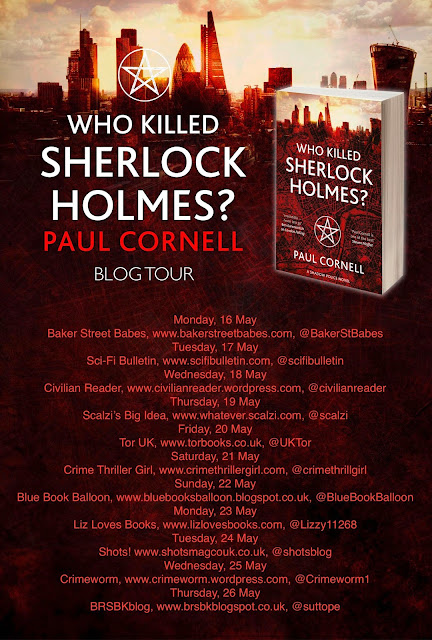