Review: The Sudden Appearance of Hope by Claire North 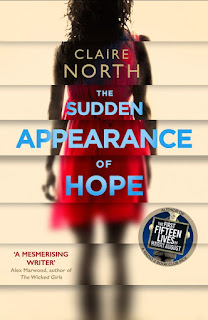 I'm intrigued by Claire North (aka Catherine Webb, aka Kate Griffin) also a theatrical lighting designer also writer of a very readable blog who seems to have written books in so many different genres and sub-genres and frankly to be outrageously talented for someone so young.

I especially like her last two books, The First Fifteen Lives of Harry August and Touch, and thematically Sudden Appearance beings with them. All three books are about individuals with fantastic (in the original sense) attributes. Harry is continually reborn, in Touch the protagonist can flow from body to body, evading death - and in Sudden Appearance, Hope really does "suddenly appear" because she has the blessing, or curse of not being "memorable".

It't not that she's plain or unremarkable, but that when she's out of sight people forget her ("the memory of me crumbled like sand castles before the sea".) Every time she meets somebody it is for the first time - whether they are friend or enemy, parent, teacher, lover or even a relentless police inspector hunting her down. Digital records survive, the written word survives ("What is Hope Arden? A scrawl of ink without a past; no more.")

In this book as in the others North does a superb job working through the implications of this strange situation.  Of course there are the the practicalities. Medical treatment is a problem, long term relationships a no-no ("I am the queen of internet dating"). Hope can't hold down a job, or even get one - so a life of crime, for which her "talent" is supremely useful, seems the only way to survive. But even more so, there is the psychology. Hope is so alone, in effect rejected by all those she loves - but they reject her in such a gentle, uncomprehending way that she can't blame them or rage against them. She tries to control herself, impose discipline ("when I am restrained in my actions, I am more than myself: I am unstoppable." She is continually counting - up and down - quoting us chunks of dictionary definitions or reciting chains of facts about whatever the current issue is: in darker hints we are told by one observer that's she's not only a criminal, but a compulsive criminal who steals continually without even knowing what she's up to. This is accompanied by a list of what she's stolen, stuff Hope herself didn't trouble to mention. No ink on the page, it can't be real, can it? There is a feeling that Hope is always on the edge, always about to implode or explode. At times she is downright stalkery, taking advantage of her ability to trail and seduce the detective who's trying to catch her.

Hope is brilliantly realised - indeed North gets inside Hope's skin to a degree, I think, that she didn't with the protagonsists of the previous two books but she isn't an easy character to have in your head, however sympathetic one may be. That's the first and perhaps more obvious difference between this and the earlier books. But this book is also significantly different (for me, even better) in mood, in motivation. It feels like a step forward. In those stories, while her characters struggled with their fantastical attributes, they fairly quickly found friends - or enemies - and lined up on the side of good against evil (or at least bad) much in the style of classical superhero stories.

That doesn't happen here. This book trades much more in moral ambiguity. Hope is a thief. She tends to target the nasty rich, but only because that's where the money is. When her activities bring her up against Prometheus, a company deploying a new lifestyle app designed to make its users "perfect", and the family behind it, it seems as though she's found a worthy foe. And no, they're not nice people and Perfection is a nightmare of conformism with shallow consumerist values and of privacy violation:

"It monitors phone calls, reads emails, accesses your bank account, tracks your internet search history, uses GPS to trace your location, rides shopping loyalty cards and mines data on your purchase habits, has access to the microphone and camera of your phone, can monitor your sleep, your waking hours, your work habits, your leisure activities..."

But nor are they a sinister criminal force (or no more than Hope is) and as she becomes drawn into a vendetta between Prometheus and a mysterious hacker planning to bring them down, there seems no war between right or wrong, no Manichaen struggle to be joined, only nasty choices and the prospect of hard all round. That it ends in bloodshed may be Hope's fault to some degree or it may not be. The mysterious byron14 may have harmed Hope or they may not. The reader is left to make up their own mind and put the truth together in the same way as Hope, seeking to reassemble fractured memories into something real. (And losing one's own memories, for somebody in her position, must really be the end - after all, nobody else remembers her).

The writing has also moved on. There were times in the other books when I felt I knew what North was saying but she didn't quite seem to say it. Here, she is in total command of her material, playing language as if she were sat there at her lighting rig, flicking switches and producing stunning effects.

That doesn't, as I said above, always make it an easy read. You have to understand , I think, just how damaged Hope is (and that's before the events of this book - things get worse for her here) and the way North gets that across can be frustrating at times (all those dictionary definitions and semi random facts, and a sense of - perhaps justified - self pity from the character: she often speaks of her mother's flight as a refugees across an African desert as though it is her own, something I found a bit irritating).

At the same time there are some searing passages, none more so than the one where Hope unexpectedly bumps into her sister. Gracie, who has a learning disability, is the only human being who remembers her. Hope had to leave home as her parents had come to see her as a stranger (why is this person in our house?) and began to clear out her room ("the spare room"). So Hope says goodbye to Gracie, then later meets here again. But she can't stay around: to the staff, she will always be a stranger. Or the moment when Hope breaks down. She's losing it. She can't remember things. No one will remember her, not herself, not others and she will be nothing, will never have been. "I am dead in all but deed".

The book is not without its flaws. However it has great ambition. Its use of language is at times superb ("she is moonlight in heels", "Does he know that he has forgotten does he understand what he has forgotten does he suspect does he hate me did he ever love me at all like I loved him"). Its sharp asides give real pause for thought ("No one's really racist any more, just as no one's really sexist. They've just got their views about things, you see"), ("Femininity is fashionable; femininity is frail and prone to giggles. I watch it all, and conclude that femininity can jump into the ocean and drown.) Above all, its empathy with its characters, especially hope, is beautiful (even if at times she is annoying and self-absorbed: give her a break!) It shows what fantasy literature at its best (or just literature) can and should aspire to.

I can't wait to see what North does next. More in this vein would be wonderful, but she seems so restlessly inventive that I don't think we should take anything for granted - and I wouldn't be surprised at all if she moves on from her troubled demi-superheroes to something else.
Email ThisBlogThis!Share to TwitterShare to FacebookShare to Pinterest
Labels: 2016, Fantasy, modern, NetGalley, review