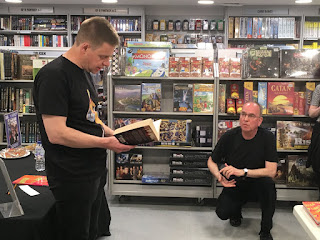 As you should now, Who Killed Sherlock Holmes by Paul Cornell was published last Thursday, 19 May and it is AMAZING. I attended the launch event at Forbidden Planet in London  (here is Paul reading from the book) and reviewed it here and I'd urge you to go and read it at once (get it at your local bookshop, or here, here or here - or there are some signed copies at Forbidden Planet...)

So... enough preliminary stuff: over to Paul!

I've always been interested in what happens when one genre collides with another, so if I was going to do urban fantasy, it was always going to be a police procedural. That is to say, the audience understands what the rules of this world should be, just like the characters do, only to find those rules thrown out of the window.

The heroes of the Shadow Police novels are a team of ordinary modern London Metropolitan Police officers, who accidentally gain 'the Sight', the ability to see the magic and the monsters most people can't. They decide that the only way to survive and stay sane is to use their training to deal with them. They have no magical mentor figure, no ability with magic themselves (though one of them is doing his best to learn), just their wits and an Ops Board that now looks like a piece of gothic art.

In the new novel, Who Killed Sherlock Holmes? they encounter the 'corpse' of Holmes' ghost, lying in the Museum at 221b Baker Street, a ceremonial dagger in his back. Ghosts in my London are the collective memories of all Londoners, living and dead, so they include, as well as the famous deceased, fictional and mythological characters. The first question they have to ask is almost an existential one: what does it mean to kill a ghost? Does this have something to do with the three different versions of Holmes being filmed concurrently in London? What about the fact that the crimes of the Conan Doyle canon are being re-enacted, in order, in their original locations?

So we have an impossible situation that's going to be investigated using real world techniques, one genre encountering another, in a very strict way, I think, because this is hopefully what crime fans call a pure whodunit, the sort where the reader can play along. That's important when the fantastic is involved. The characters shouldn't be able to pull out some impossible resource that the author hasn't told the readers about. SF and fantasy readers look for cues, as they read, as to the nature of the world they're discovering. Crime readers are attuned to look for clues and red herrings in the same way, so to some degree mixing those two genres is just a question of carefully substituting one of these things for another. And some energy and surprises can be found in not telling the reader which is which.
I hope the book is satisfying for readers of both genres. And, incidentally, for new readers, since I've made sure that it forms a good jumping-on point if the subject matter has attracted you to your first Shadow Police experience. Myself I'm happy for these books to be called Fantasy Procedurals. That rather trips off the tongue.

Paul Cornell has been Hugo-nominated for his work in TV, comics and prose, and is a BSFA award-winner for short fiction. He has also written some of Doctor Who’s best-loved episodes for the BBC, and has more recently written for the Sherlock-inspired TV show Elementary, starring Jonny Lee Miller and Lucy Liu. He lives in Gloucestershire.

Find out more www.paulcornell.com and @paul_cornell.