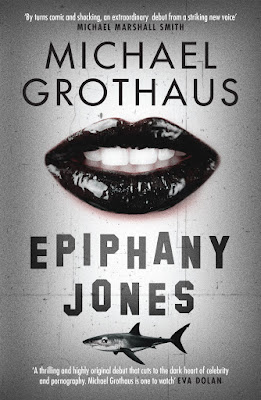 
"A man with a consuming addiction. A woman who talks to God.


And the secret connection that could destroy them both…"

At the heart of this book is a quest for redemption and atonement. It also confronts head on a real sense of darkness in our culture. There is no denying though that it is a tough book. I don't normally attach trigger warnings in reviews but for this book, I should say that there are themes of sexual abuse and violence.

There's intermittent controversy amongst readers and online reviewers about "likeable characters" in books. One sees, for example, reviews on Amazon where books are downvoted "because I couldn't like the characters". My view is that this is an over naive approach to literature - but if that is your outlook you may not get on with this book.

The shark picture on the book's cover alludes to Jerry's role in the book, explained by a story quotes early on - hoiked out of its natural environment and flung onto land to be assaulted and destroyed in an alien world. That's Jerry's (who tells the story) point of view from the start, right from the moment he finds himself under suspicion of theft and murder. The reader (well, this reader) doesn't sympathise with him much. He's a bit of a slacker. While it's clear early on that he has "issues" - a dead sister and father - his way of coping with those (a library of pictures in which the faces of well known actresses are photoshopped onto the bodies of porn stars) is, if perhaps true to life, also pretty squalid. It is a sad subculture he's part of, a fact which Grothaus conveys in ways both amusing - as in this online exchange:

- and also downright repellent. On a couple of occasions, Jerry's anger at a woman seems to be expressed by him considering sexual violence towards her.

Jerry is mixed up in other respects as well, seeing "figments", people who aren't there, both of real people he's met and wholly imaginary ones and making up girlfriends (a fiction his work colleagues and mother see through immediately). In particular he's haunted by a dream of a young girl - a girl he begins to think he sees, though older, in real life...

Anyone less suited to go on the run from both the police and a people trafficking mafia - sans money, sans meds, sans everything, aided only by a woman who talks to God - would be hard to imagine.

Epiphany seems more straightforward, if more driven and indeed more driving of the plot. She is working towards a definite end (although she won't share what it is). Jerry's mother is an expert on Joan of Arc, and there's a clear comparison between Epiphany - with her voices, her suffering - and Joan, as women who, despite enveloping male violence, set out to achieve their goals. It's a mystery for most of the story exactly what those aims are and perhaps even more why she would want anything to do with Jerry at all much less see him as the means to those ends.

Grothaus produces a compelling story out of these tensions. Saying much more about the detail of the plot would spoil it, but it's essentially an international chase to an uncertain end and once things really get going, you simply have to keep turning the page to see what will happen next. The writing, which is excellent, simply keeps things moving on. Grothaus uses a loosely noirish style, written in the present tense:

In particular he has a way of introducing Epiphany's, and other characters' but mainly her, speech, with variations on "And Epiphany, she says..." which have the effect of making it sound sound natural, inevitable, almost Biblical, underscoring the drivenness of this story and of course the supernatural voices she claims are leading here and Jerry to their uncertain end.

We gradually learn more about Epiphany's shocking background, the wrongs she has suffered, and what she will do to save others from what happened to her. The tragic events in Jerry's life also become clear bit by bit (although I have to say, I had guessed the very final revelation some time before it came). There are some extremely dark aspersions cast at the reality of the Hollywood film industry: both about what actors may be forced to do to get that big break, and how wealth and power are used and abused by the men at the top.

Greater knowledge may not mean you like Epiphany or Jerry more - she does some terrible things, he adds to his flaws an unpleasant strain of cowardice and indecision - but you will I think come to care about them and indeed to cheer them on to success (though in the shabby world portrayed here, just what that might mean isn't always clear).

Grothaus deserves credit for tackling some traumatic themes head on (and Orenda for publishing the book) and doing so with verve and humour. This will though be a hard book for some to read and isn't for everyone, but ultimately, will be rewarding for those who do (as well as frequently funny: one death towards the end is almost laugh out loud funny and had me shouting "YES" as I read it).

This review is part of the Epiphany Jones blogtour. For other stops on the tour, see the poster below. 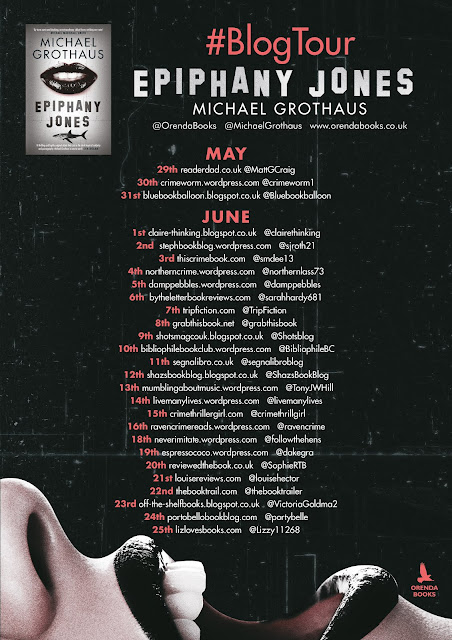