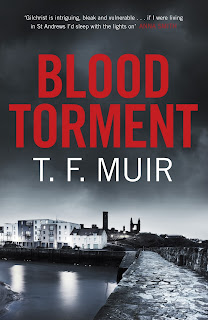 TF Muir is the author of the DCI Andy Gilchrist series set in St Andrews. Blood Torment, number six in the series, was published by Constable on 5 May.

When a three-year old girl is reported missing, DCI Andy Gilchrist is assigned the case. But Gilchrist soon suspects that the child's mother - Andrea Davis - may be responsible for her daughter's disappearance, or worse, her murder.

The case becomes politically sensitive when Gilchrist learns that Andrea is the daughter of Dougal Davis, a former MSP who was forced to resign from Scottish Parliament after being accused of physically abusing his third wife...

I'm honoured that Frank has written a few words for the blog.

For more information on Frank and his novels, visit his website at www.frankmuir.com

Where did Gilchrist come from?


When I first dreamed up the idea of writing a crime series set in St Andrews, the first thing I had to do was come up with the character. Okay, a name. What am I going to call him? And in a flash, the name Andy Gilchrist came to me with such clarity that I thought I must know the man from somewhere. I trawled through my memory, checked my contacts, spoke to my wife, but no, I knew no one with the surname Gilchrist.

Name chosen, I then had to create a physical being. That was easy. Gilchrist was going to be everything I’m not: He’s six foot one inch tall – I’m a typical Scottish short-arse; He can run long distances – I came last in the school cross-country trials; He has a high pain threshold – I faint giving blood; And he’s handsome – I’ll let my wife be the decider on that one.

Many years later, with a number of novels written, I visited my cousin, Tom, whom I had not seen since the passing of my mother sixteen years earlier. As long-lost cousins tend to do we talked about family and relationships therein. We both shared the same grandparents, and I mentioned that I planned to do a genealogical search on our family, although I suspected I couldn’t go back further than our Grandpa John Rae on my mother’s side, because my mother told me that her father had been adopted at birth. Tom, who had read my books, looked at his wife, Jane, for a long moment, then said, ‘We thought you knew,’ and told me that John Rae had been Grandpa’s adopted name, but he had been christened John Gilchrist. Hairs really do rise on the back of the neck, and electricity really does zap up and down spines. I still shiver when I recall that moment.

However, the realisation that somewhere deep in the darkest canyons of my subconscious had lain some genetic memory passed down to me through my Grandpa John, now raised another perplexing, perhaps even more worrying, thought. Where do my ideas for murderous plots come from?

Up until that meeting with my cousin I’d thought I more or less just made them up. Now I wonder if my talent for writing believable scenes of violence and all things gruesome is not just imagination, but the faintest recollections of genetic memory passed down to me from long dead relatives.

If so, I must be descended from a frightening, murderous lot.

Available here, here or here - and in your local bookshop.